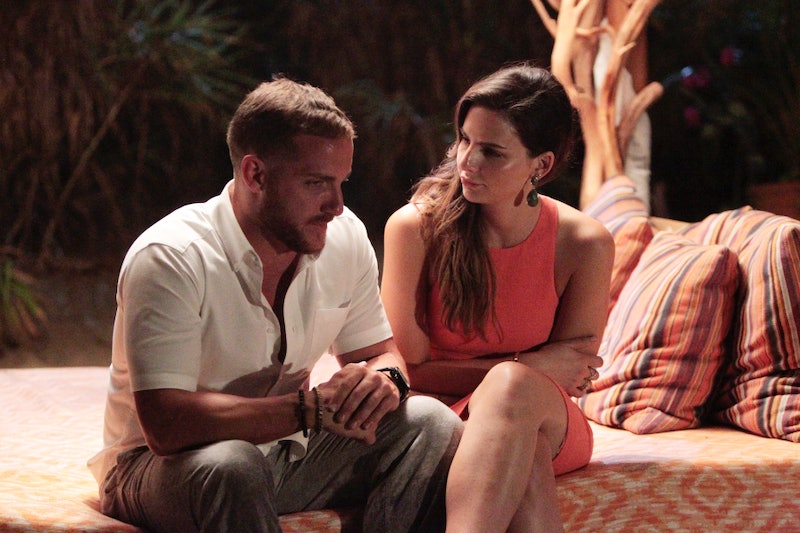 Vinny and Izzy were definitely my favorite couple on Bachelor In Paradise, but it sure seems like the tides are turning on their relationship. They hooked up pretty much from the start, but Brett Melnick (he was on Andi’s season of The Bachelorette — I didn’t remember him either) came in and Izzy thought maybe she was interested. This obviously broke Vinny’s beautiful little heart and ruined the hopes and dreams of everyone who thought Vinny and Izzy were the BIP OTP. Is Vinny single after Bachelor In Paradise , or has he found love at home?

Before we get to that, let’s back up a second. Why did Izzy find something in Brett when she could have had Vinny? Well, he came in and she thought he was the total package, but also I think that Izzy, who had tied herself to Vinny from the show’s onset, was making sure that there wasn’t anything else out there. It seems like Vinny and Izzy were really solid, but let’s think about this — they were together for honestly like a week in real people time. Izzy wanting to see someone else other than Vinny is just smart, since none of the people on Bachelor In Paradise really, truly know each other yet. It’s just dating. That being said, Vinny was pretty sad when Izzy said she wanted to test the waters elsewhere. It even hurt him again watching it back when it aired.

Izzy isn’t wrong, but Vinny has the right to move on, too. So has he moved on after Bachelor In Paradise? From a look at his social profile, Vinny is the king of self-promotion. He has this thing called “Vinsane Summer” and he’s doing appearances in both the United States and Canada (maybe he’s visiting Daniel).

There are not really other women on his social channels either, save for the other Bachelor In Paradise ladies like Jen Saviano and Jubilee Sharpe. He also has a serious bromance with Canadian Daniel, but it doesn’t seem like anything else. I know that the contestants on Bachelor In Paradise and its ilk have to keep things quiet on social media lest they have another Kaitlyn Bristowe Snapchat incident, but since most of the other contestants are so bad at keeping their relationships a secret (looking at you, Lace and Grant), Vinny is probably not dating anyone if there are no pictures of anyone anywhere. I’m sure a summer of club promotions (ah, to be young and from Long Island, like myself) takes up a lot of his schedule.

My hope for Vinny is that he and Izzy can rekindle their relationship post-Paradise. What’s that thing about absence making the heart grow fonder? If they got back together, the next obstacle in their relationship would be Vinny’s mother. Proud Italian mother she is, she made an appearance on JoJo’s After The Finale Rose special to tell JoJo that she made a mistake not picking her son. You know that Izzy has to win over Vinny’s mom’s favor if she’s going to date her son. Izzy is a delightful gal, so I’m sure it won’t be a problem. Then these two can live happily ever after.