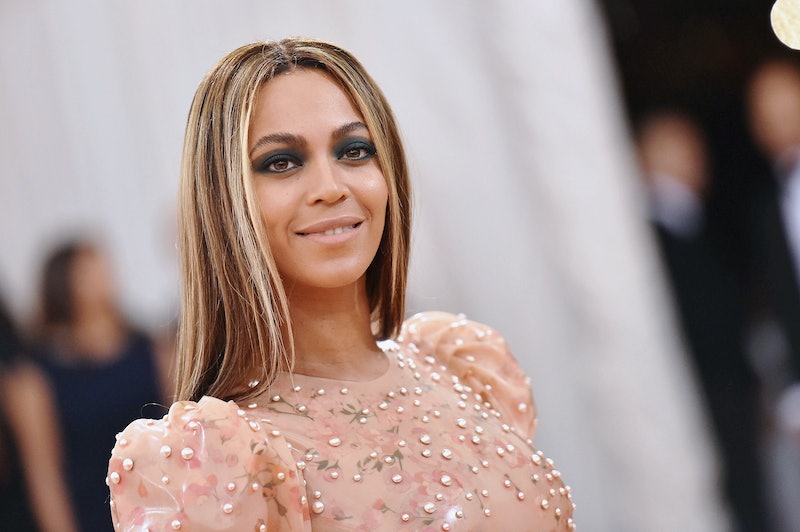 It's been a full four months since we were graced with a splash of Lemonade , Beyoncé's sixth studio and second visual album, and, in the light of that anniversary, we've been blessed with a gift from our queen. Very recently a slew of unreleased behind-the-scenes Lemonade photos made their way onto Beyoncé's website, giving us a second serving of the masterwork. See, these aren't your typical covert off-duty shots. These new Lemonade pictures reflect on Beyoncé's flawless reputation and image... in a mainly positive way.

Right now, the way the Lemonade shots are set up right now are divided by songs and enforced by a dictionary definition of some key words: "Intuition," "Denial," "Anger," "Apathy," "Reformation," "Forgiveness," "Resurrection," "Hope," and "Redemption" all make the cut. It's beautifully curated, without question. But it's these candids — or the not-so-candid on-set shots, at least — that take center stage and show another highly aesthetic angle to the singer. Not a single picture looks less than iconic. Beyoncé shines just as bright looking like a Goddess of Embers as she does mid-bath. And we've come to expect her to put out nothing less than that: the Beyoncé image is built upon utterly impeccable. It elevates her to true levels of artistry, because you know she's fine-tuning every little aspect of her life.

Of course, there can be a slight fault in that need to be impeccable. Take, for example, how the performer tried to shut down the Unflattering Beyoncé meme before it truly took flight. When less-than-glamorous shots of Beyoncé at the Super Bowl appeared in the Buzzfeed listicle "The 33 Fiercest Moments From Beyoncé's Halftime Show," Beyoncé's publicist sent an e-mail asking for some of the more unsavory shots to be removed. Suffice to say that this worked against Beyoncé's reputation and launched a thousand Photoshopped disasters. That kind of maintenance of appearance, to the point of not just enjoying the fierceness of her reputation (she was performing at the Super Bowl, no jacked up expression should undermine that accomplishment), is not a good look.

However, most of the time Beyoncé's Queenlike disposition works for her, and, in this venue, it plays especially well. I have a deep appreciation for Beyoncé's stunningly arranged photos here, because they work to highlight the impressiveness of her craft. And While the the implied Jay-Z cheating drama and interweaves of poetry are, you know, just as important to why Lemonade was a huge triumph, it is first a foremost as visual album. The visuals have to be captivating, colorful, and strong. They can't be grainy shots that you and I could've taken on the sly for Instagram. Beyoncé understands that, and thusly delivered us true beauty.

There is one particular photo that strikes a neat balance between Beyoncé's drive for perfection and it's subsequent positive affect. One shot shows the singer in full, yellow ruffled "Hold Up" garb. She's flaunting a "Boycott Beyoncé" sign and donning some basic black Uggs underneath her frock. Even joking around between takes Beyoncé looks exciting, gorgeous, boasting the best hair in the game. But take a gander at the girl in the little poofy jacket behind her; she serves as a reminder that Beyoncé existing in the public eye in such a grand way is important.

Staged or not, Beyonce's image matters to those of us who want to summon our inner queen, even if our own behind-the-scenes shots are far less glamorous. Feel free to check out the full set on Beyonce's official website.