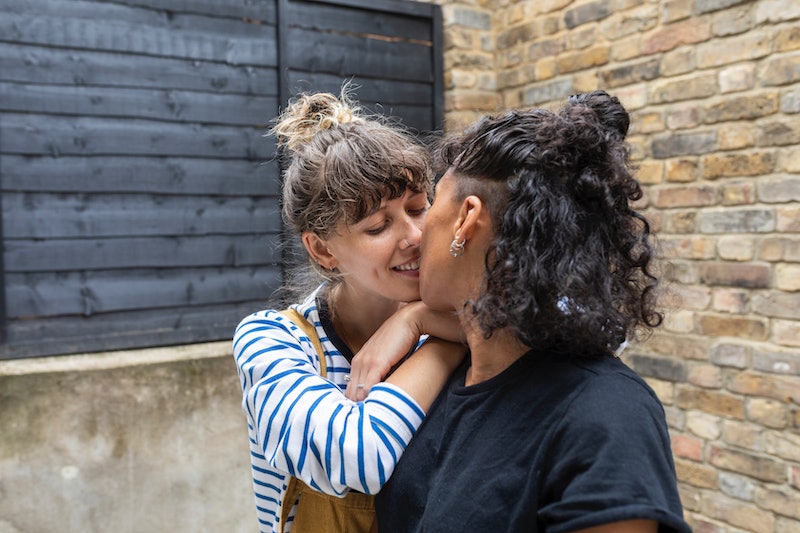 As stressful as it is, fighting with your SO can actually be a good thing. That's what the experts say, at least — they report that the happiest relationships involve a healthy amount of arguing, but it's the quality of these fights, not the quantity, that matters most. "Productive fights are ones in which the couple 'fights fair,' and focuses on solving the problem at hand," Susan Pease Gadoua, therapist and co-author of The New I Do: Reshaping Marriage for Skeptics, Realists and Rebels, told Mic. The flip side of this is that other kinds of fights aren't really worth your time — but knowing that doesn't mean you and your SO will never again have a ridiculous fight over something unimportant.

In fact, since no relationship is perfect (well, other than John Legend and Chrissy Teigen, probably), it's only a matter of time before you and your partner find yourselves fighting about something so dumb that you're embarrassed to tell your friends about it the next day. It's those moments when it's important to realize you're wasting time and energy fighting about something unimportant, throw in the towel and lock lips — because there are more important things to argue about than which movie to watch on Netflix on a lazy Sunday afternoon. If you can't find a good enough reason to give up on your latest squabble, keep in mind that today, August 25, is Kiss and Make Up Day. Yes, that's a holiday, and yes, it's a great excuse for make up sex.

Here are 13 times you should just kiss and make up.

1. When You’re Arguing About Where To Go To Dinner

You’re about to go on a date. There’s really no need to pull out the scorecards and figure out who got to pick which restaurant you went to last time. Just give in, hug each other, and agree that pizza solves everything.

2. When They Forgot To Pick Up Something You Needed At The Store

I understand that it can be infuriating when you ask your partner to pick up one simple thing, and they conveniently lose their short term memory immediately after your conversation. But at the end of the day, it’s just not worth all the stress it takes to lecture each other about all the times you’ve let one another down. Have a nice cuddle and go buy yourselves some razors tomorrow.

3. When You’re Fighting About Which Family To Spend The Holidays With

Both of you have families, you say? Really annoying, overbearing families? Well, you're the lucky ones. Not everyone is fortunate enough to have a clan of nosy individuals who will do anything in the world to spend Thanksgiving with them. Count your blessings and just draw straws to choose whose family will get the privilege of driving you crazy you this holiday season.

4. When Your Dog Poops On The Floor And Neither Of You Wants To Clean It Up

You have an adorable, fluffy dog. What could you possibly have to complain about, people?! Furry cuddles trump everything.

5. When One Of You Gets Jealous For No Reason

You and your SO are sexy individuals who attract a lot of attention from other people. You knew that going into the relationship. If you guys are solid in your love for each other, there’s really nothing you have to worry about, no matter how pretty that girl is in your partner's yoga class is.

6. When You're Mad Because One Of You Is Running Late

If one of you is punctual and the other likes to cruise their way through life, you'll misalign at some point and piss each other off. Yelling and screaming will get you nowhere, though, if you're trying to get somewhere. Give each other a big smooch instead of shoving each other out the door.

7. When You Don't Like The Music The Other Is Playing In The Car

This may be one of the most common, most ridiculous fights every couple has at one point. If it's really becoming a problem, turn the damn radio off and actually talk to each other about what's happening in your lives.

8. When You Disagree About The Identity Of Becky With The Good Hair

Was it an actual person? Was it someone famous that we all know? Did Jay-Z ever cheat in the first place?! The two of you still can't come to an agreement on this riveting subject, so instead of getting riled up enough to where you slam doors, be grateful that your love life isn't splattered all over the tabloids.

9. When You Can't Decide Which Sleeping Position Suits You Both

This is something that couples actually have blow-out fights over. It may be perfectly normal, but it's outrageous all the same — I mean, you're fighting over how affectionate you're being to one another. It's silly. Decide on the fact that arguing isn't meant for the bedroom.

10. When They Took Your Spot On The Couch While You Were In The Bathroom

"But that's my spot!" is such a satisfying thing to scream at someone who has just robbed you of comfort. If they don't move, it can feel like the final nail in the coffin of your now-ending relationship. Rather than smother them with the pillow, though, surprise them by climbing in for a cuddle and a big kiss.

11. When You're Bickering About What Bed Sheets To Buy

Making choices about the state of your abode can be a surprisingly stressful thing to endure as a couple. Know that going in and you might save yourself a few quarrels. Commit to finding a compromise, rather than gunning for your way or the highway.

When you're boxed in a small car together for an extended period of time, it's all too easy to infuriate each other over the smallest things. If you lose your track along the way, so what? It just means you get to spend more time together — so embrace it and save the scolding for another time.

13. When You Can’t Even Remember What You’re Fighting About In The First Place

If you've been fighting for the whole evening and can't even recall how it all started, take that as a sign. It's time to make up and start fresh, because there are very few things worth arguing about when you're head over heels for each other.