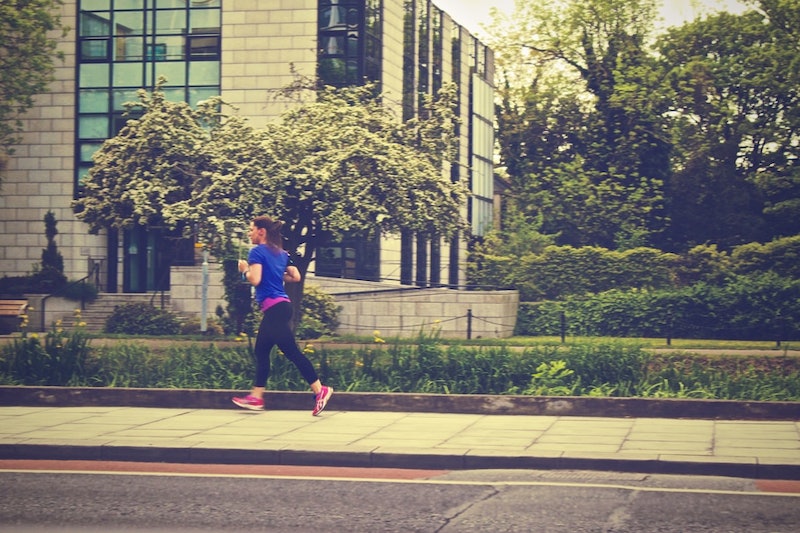 Ever since I was a little kid I loved the idea of running at night. I liked the aloneness and the mystery of it, the quiet making you feel like the only person in the world. When you grow up reading about kids roaming the Hogwarts grounds at night and watching the Spy Kids take on secret evils, you start to think you're invincible, too. But as fate would have it, I grew up in the real world, and would come to understand very quickly that there would be no running around after dark. That there were, in fact, a whole host of rules about running that I didn't know about yet, rules that will apply to me throughout my running career — but these rules had nothing to do with running, and everything to do with the fact that I am a woman.

Every woman who works out knows these "rules," whether explicitly or implicitly; where boys growing up are warned about stress fractures and hydration and the regular things athletes have to worry about, girls are taught about that and so much more — how we should dress, when we should be out, how we should learn to defend ourselves to be a woman who works out in the world. It's so ingrained in us now that it is almost an unconscious burden, one that as an adult I consider an annoyance but no longer have the time to waste being annoyed by. After all, there is only a limited time of day I'm supposed to be outside — sometimes I'm so busy trying to make the most of that time that I don't have any extra left to question why.

But every now and then, there comes an incident that reminds us just how very real these "rules" are for women. We all know the story about that one woman in our area who was assaulted on a run in the woods, or stalked in the gym parking lot, or disappeared jogging at dusk. We all know these cautionary tales because they're told by people who love us, people who want to protect us, and to do that they are obligated to scare us by reminding us just how easily it could be us, if we're not careful. But in the last month alone, three women have been murdered in public and broad daylight while out on runs; even the rules that we are held responsible for upholding evidently cannot protect us from the fact that being a woman is dangerous, and being a woman who works out only exacerbates that danger.

It isn't lost on any of us the especially bitter crux of it — that working out, one of the few joyful, selfish things women do to take care of themselves, is still fraught with danger from men. That something as basic as going outside comes with a dozen different worst case scenarios that we are held responsible for anticipating and even preventing. The truth is, men working out will never be able to truly fathom the depth of the things women have to worry about working out, because for them, these dangers are virtually nonexistent:

Going Out At The "Wrong Time"

I have an experiment for you. Go out right now and tell a friend — any friend, any age or gender, it doesn't matter who — about one of those three women murdered while running in the past month. Then count to ten. If they haven't asked, "What time was she out?" in those first ten seconds, then I'll eat my own hand.

It's not that it's the person's intention to victim blame (well, most of the time it isn't, anyway). It's that we've been so conditioned from the moment we were first mobile to think that women shouldn't be out at a certain hour, and certainly not by themselves, that we assume if something bad happens, that "rule" has been broken. In fact, it's comforting to us — we want to hear she was out at night. We want to hear that it was a secluded area. We want to hear that because the fact that it can happen in broad daylight in a public space is horrific. We want to assign blame to her, however unfairly, because that brings some semblance of logic into a thing that is unthinkable, but that's being a woman in the world — worrying about these kinds of unthinkable things every day.

Working Out In The "Wrong Kind Of Place"

If this isn't the first question someone asks when a woman working out is compromised in some way, this is the second. Whereas men are generally free to roam most public spaces, be it a gym in a certain neighborhood, or a running or biking route, with women there is always a clear set of rules. When a woman goes out on a run, part of her weighs which path will be the most effective for their workout, or the most scenic — while also weighing, however consciously or unconsciously, how far it is from a public space. Whether they're likely to encounter other runners there or if they'll be secluded. Whether or not, if it came down to it, anyone would hear them scream. For women who work out, it is a rare if not impossible moment that she walks out the door without accounting for all of this and more. Especially considering one of the biggest kickers female athletes have to deal with ...

As a woman, you certainly don't need to be an athlete to be subjected to the victim-blaming culture surrounding what women wear. From an early age it's reinforced with dress codes to "stop boys from being distracted," with questions in rape cases about "what she was wearing," with comments from family, friends, and even strangers about "the kind of message your clothes are sending."

But workout clothes have their own special hell to deal with, because the ones that allow athletes the most functionality are tight and made of material that wick away sweat, and designed to withstand the sometimes extreme heat athletes are performing in. Because of this, these clothes are subject to even more of the already unfair scrutiny of women's clothing choices, and often used as an excuse for harassment. And that harassment comes in all forms; as a woman getting dressed for a workout, you're constantly wondering: Will someone shout something nasty at me if I wear this? If I run in a sports bra, will someone follow me? If I find myself in a situation where I'm alone, just how easy would it be for someone to rip these off if I couldn't get away?

Because it can and will come into play, should something ever happen. Even in high school I was getting forwarded emails about how women can ensure their safety by knowing what rapists look for in a target. Namely, women in ponytails and spandex clothes that are easy to remove. And yes, I am grateful for that knowledge because as a woman, you do have to know what you're up against in this world, however unfair it is. But at the same time the fact that those emails had to exist is a larger testament to just how warped the narrative surrounding female victims has always been.

Oddly, nobody was forwarding any emails to the boys in high school about how to not harass and assault women.

Not Working Out With A "Buddy"

Last week I posted an essay about how I don't post about my workouts for fun, but rather because I'm scared when I go out and want people to know where I am in case something happens to me. And while I usually avoid the comments section, I couldn't help but graze over one that told me to "just get a dog" to run with me.

This is, unsurprisingly, something women are told all the time. If you want to go run on that trail, bring a guy friend! If you want to go hiking alone, bring your dog! But "solutions" like this are just a band-aid on the bullet wound that is the larger issue: the fact that women can't go out alone in the first place without expecting trouble. Women don't want a dog, or a friend, or a boyfriend to go work out with them. We want the ability to work out on our own like the human beings with basic rights that we are. Unfortunately, whether or not you're an athlete as a woman, the world just isn't there yet.

Making Sure You Are Prepared For The Worst Case Scenario

Make sure your phone is fully charged before you leave. Carry pepper spray in your pocket. Wear leggings with a double-knotted drawstring. Carry your keys between your fingers. If someone grabs you from behind, kick up, or stomp on their foot with your heel. The most sensitive places to attack if you need to defend yourself are the nose and the groin.mIf someone tries to drag you, go limp to make it more difficult. If someone attacks, make as much noise as possible, and keep on making noise, because statistically speaking, the attacker is more likely to run away. But if they have a gun, don't struggle. Download an app that automatically calls 911 or calls your friend if you don't deactivate it.

The cycle is almost laughably awful: we're told all the ways we're supposed to prepare, and held accountable for it, and then when we do everything we're "supposed" to, we're accused of being "dramatic" or "paranoid" for all of our efforts. There is no middle ground — either you're fully prepared and treated like a ridiculous person for doing it, or you're seemingly not fully prepared, and there is a wide open invitation for people to victim blame if something does happen to you. When you're trying to ensure your safety as a female athlete, the situation is always a lose-lose.

More like this
How To Fight For Reproductive Rights, Based On How Much Time You Have
By Courtney Young
The Music Industry Continues To Fail Black Women
By Precious Adesina
Experts Say These 23 Things Won't Happen In A Strong Relationship
By Carolyn Steber
17 Genius Things You Can Do With Old Clothes That You Can't Donate
By Brittany Bennett and Dominique Norman
Get Even More From Bustle — Sign Up For The Newsletter