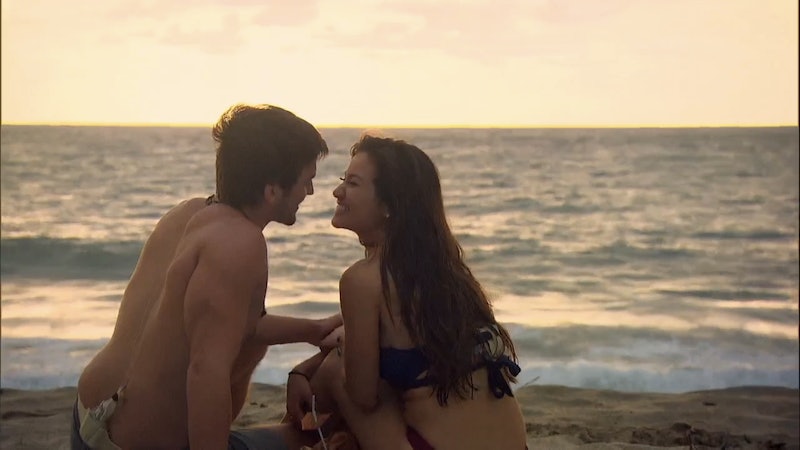 I have no problem admitting that I've dedicated an alarming amount of time to The Bachelor franchise. I also have no problem admitting that, up until Bachelor of Paradise, I watched with extreme skepticism. But, the franchise's paradisal spin-off has led me to become more hopeful. Because when you really look at the situation and think about it — sure, keeping in mind it's still reality television — Bachelor in Paradise is the best place to fall in love.

When a season of The Bachelor wrapped up, I'd assume that the two just-engaged people on my TV screen declaring their love for each other were destined to break up. Even if they seemed ecstatic. I know that sounds pessimistic, but look at the odds. Look at the concept of the show. How can one person find ever lasting love with another person when they've barely spent more than a few days alone in total with them? Now, of course, I'm not speaking from a place of experience (though I am free next summer, so get at me Fleiss). I'm speaking from a place of noticing what ways Bachelor in Paradise works where The Bachelor/ette doesn't.

Bachelor in Paradise centers around the premise that a group of attractive 20 and 30something people with an endless supply of margaritas and not much else to do other than talk to each other can find love. Yeah, it's a controlled environment, but, in a lot of ways, this set up mimics the way people date in real life.

At this point you may be thinking "Real life?! How does this mimic real life?" And you're right, most if it doesn't. Not all single people get to spend a few weeks in Mexico with a group of other single people, all with the hope of falling in love and (maybe) getting engaged at the end. However, a lot of single people that are in the dating game do date in this way. They meet people that are part of their social circle through networking and other friends. They might go on a date with a person they like a few times, and then when someone else they deem more compatible comes along, they go on a date with them instead. Sounds simple when it's broken down like that, but, at the end of the day, the way everyone tries to connect on Bachelor in Paradise is kind of the way everyone tries to connect outside in the real world too.

However, the biggest reason why Bachelor in Paradise works is time. The contestants on Bachelor in Paradise get to spend so much time together: every waking minute if they so desire. Which means that these people actually get to know each other. In fact, they are forced to get to know each other. What else are they going to do? Outside of BiP, daters aren't afforded this luxury. They have jobs and other friends and family obligations and even finding an hour or two to grab coffee with someone else can feel like a daunting task.

Unlike The Bachelor/ette where only one side of the couple has an idea of the other's personality traits beforehand, there's familiarity with the contestants on BiP. Most of the time, someone comes in with a wish list of who they'd like to pursue, based on either having met them in the past, what they were like on their respective season, or both. This means that the pairings aren't just a total stab in the dark. Everyone's already thought about compatibility here.

Then, there's the environment. It's paradise after all. It's beautiful, it's warm, it's relaxing. There's a reason people honeymoon in tropical destinations. They are romantic. They offer a safe space for intimacy and opening up. Everything's so much more casual, and there aren't as many elaborate dates. Instead, the contestants are offered "days out" and "dinners" and a lot of the time they just end up planning things for themselves.

Take for instance, the "date" Daniel planned for Sarah on this season. He set up one of the daybeds with chocolate-covered strawberries and champagne, and then proceeded to tell Sarah how he felt. It was a romantic gesture that felt organic to Daniel, and something he would have never felt comfortable doing on The Bachelorette, where there's so much more pressure. You know why? Because there's so much less time to make an impression.

As we know that this season of BiP will end in three engagements, I don't think it's too optimistic of me to assume that these couples will have a shot outside of the show. Like I said, Bachelor in Paradise is the best place to fall in love, right?