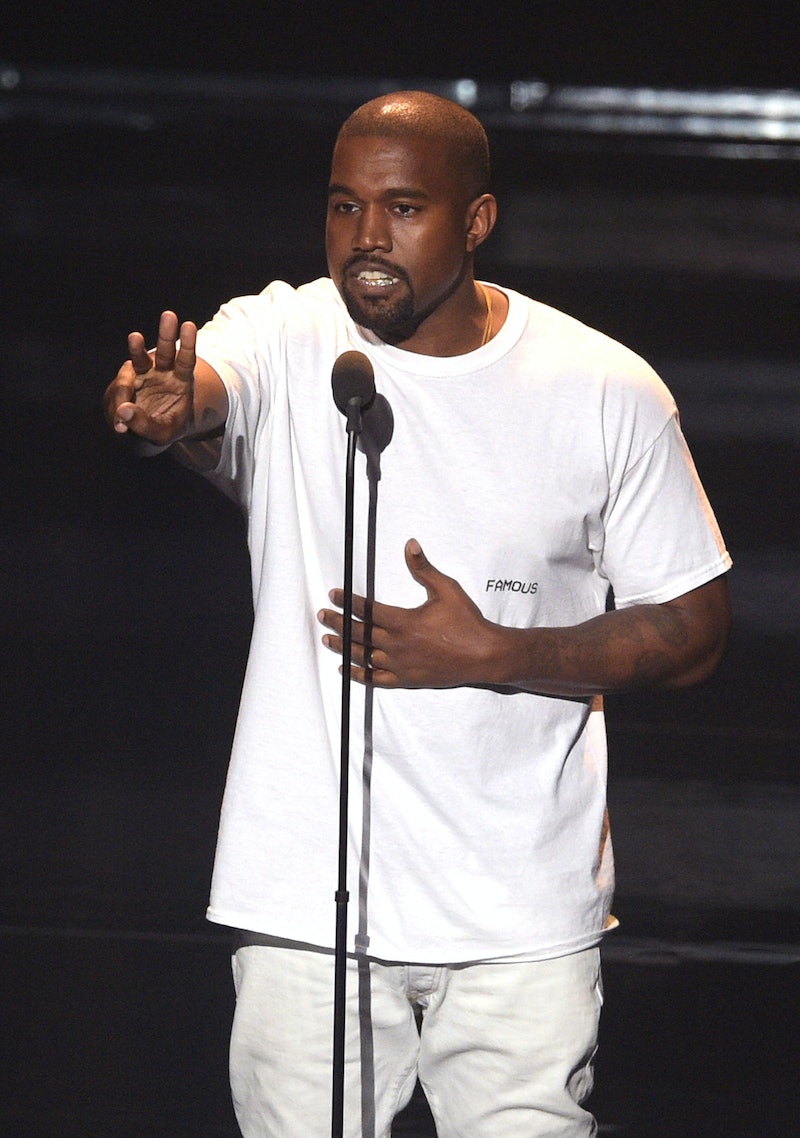 Leave it to Kanye West to post the most cryptic tweets possible, especially when it comes to T. Swift. It seems like Kanye West is supporting Taylor Swift on Twitter, based on a tweet the rapper shared Monday. Alongside a photo showcasing a mashup of the album covers of Swift's 1989 and West's My Beautiful Dark Twisted Fantasy printed on a white t-shirt, he simply wrote, "unity love." The tweet could have several meanings (this is Kanye West after all), and potential explanation is West trying to show his support for Swift and put all of their drama behind them. Unity is so important, especially if you want to make an impact, which just might be what the 39-year-old artist is saying.

Ever since Kim Kardashian shared Swift and West's phone call about his song "Famous" on Snapchat in July, the drama between the trio has been unreal. Granted, it's died down a bit, but all anyone can think when these three names are mentioned or they may attend the same event together is, "Do you think they'll speak?" There's a good chance West is past all of the ridiculousness, which is he why he's tweeting about "unity love." The fact that he didn't really call out Swift during his 2016 MTV VMAs speech just might be further proof that he is ready to move in a more positive direction with the 26-year-old singer.

Plus, this isn't the first time West has discussed how everyone needs to come together as one, rather than being on opposite sides. During a May appearance on The Ellen DeGeneres Show, he went on an extremely long rant, but it was filled with meaning. He said:

"Don’t tell me about being likable. We’ve got 100 years here. We’re one race. The human race. One civilization. We’re a blip in the existence of the universe, and we’re constantly trying to pull each other down. Not doing things to help each other. That’s my point. I’m shaking, talking about it. I know it’s daytime TV, but I feel I can make a difference while I’m here. I feel I can make things better through my skill-set. I’m an artist."

Twitter could be West's way of not only trying to reach out to Swift and say, "Hey, let's move past all of this," but also showing his fans that he wants to unite with Swift, so everyone else needs to forget about their negative history. It's about coming together as one now, instead of taking sides in a celebrity feud.

If he isn't showing Swift love, then maybe this is West's way of teasing something much bigger and unexpected. A side-by-side image of their album covers could very well be a clue that West and Swift have already reached "unity love" and are now collaborating together. Can you imagine?

There's no way to know for sure when it comes to West, but let's just hope this is his way of saying the so-called feud with Swift is in the past and only positive things are to come.