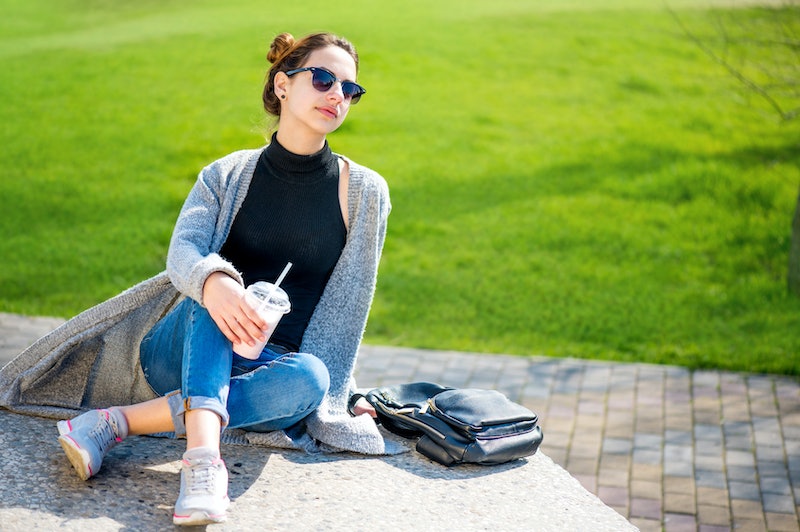 No matter how many years it's been since I graduated, Labor Day gets me reminiscing about buying overpriced textbooks, making awkward conversation at dorm parties, and scoping campus for crushable classmates. It also gets me thinking about student sex tips I wish I was given back in the day, because college is nothing if not boot camp for dating and sexing in the "real world."

My university sex life was pretty underwhelming. I spent the first semester focusing on my studies and learning how to drink as much as possible, had some decent sexual experimentation thrown in during winter break, and then went and got into a relationship for the next three years. My friends and family kept telling me that I was too young to get too serious with anyone, but what did they know? (Everything, it turns out. Everything.)

Outside of relationship advice, however, what I really missed out on was sexual advice, because my college relationship just didn't cut it in that department. Then again, everyone lives life at a different sexual pace and who said the road to enlightenment was supposed to be quick and easy? Still, the fact remains: however amazing or awful your relationships and/or hookups are, if you know yourself and your body a little bit better, your sexual experiences can only get better.

These are seven sex tips I wish I knew in college:

2. Use Lube Early And Often

I once thought lube was only for older women who couldn't get as juiced as they could years before. Little did I know that sometimes there are physical and mental reasons you aren't all Niagara Falls, and using a little liquid helper to prevent tearing and pain and increase arousal can solve many a sexual quandary.

Patriarchal narratives suggest that a woman is a "prude," or "uptight" if she isn't in the mood. Consent culture, however, has shown us that is patently untrue, and in fact, asserting your desire for sex is sexy AF. Forced or coerced sex isn't cool. It's rape. Nobody should be convinced to have sex, end of story.

Virginity is a social construct that says a woman is somehow forever changed by a penis entering her vaginal canal. I call bull! It's the same as thinking that sex is P in V or it didn't happen. This underestimates the beauty of all the wonderful iterations of sex that don't have to be penetrative to be pleasurable — and which are just as much "sex" as any other kind of heteronormative action out there.

5. Your Sexuality Can Be In Flux Well Past Your Teens

You don't necessarily enter college with your sexuality set in stone, and neither do you have to graduate with a permanent idea of who you like to bed, either. For some folks, sexual experimentation is a lifelong exploration. It's not a phase you go through, and it might not ever reach an end point of a simple gay or straight.

6. There's No Shame In Being Inexperienced

Slut-shaming is terrible, but prude-shaming is equally wrong. No one's worth should be based upon their sexual experience or inexperience. And besides, having more sex doesn't always mean having more good sex.