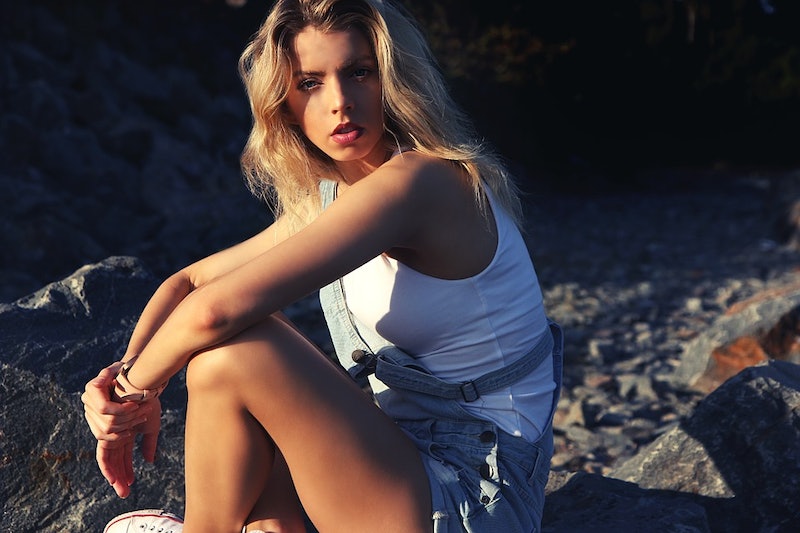 While leaving the home without perfume on is one thing, eating stinky foods that can release odors through your skin's pores is quite another. Knowing which foods can make you smell bad and how best to eat them, depending on situation and company, could help prevent a few embarrassing stories and awkward hugs (the worst, right?). Debra Jailman, a dermatologist, and author of Skin Rules: Trade Secrets From a Top Dermatologist, in interview with Men's Fitness, said that the odor can affect you within two hours of consumption, and it can last for a few hours at a time. Take note of what your day or evening plans entail before chomping down on such hazardous foods.

As a certified health coach, I work with clients on feeling comfortable and confident in their own skin, and unfortunately a mal odor can definitely interfere with abilities to feel radiant and fresh. Another disappointing fact is that many of these foods that produce smells are actually incredibly nutritious, and should still remain a great addition to a clean, healthy diet, packed with whole foods and colorful ingredients. Instead of getting rid of these foods from the diet, work on taking care of portion sizes and timing of eating. For instance, if you're going on a date and might be spending the night, perhaps go for a different menu item; yet, if your date will only last two hours before you part ways, you'll be out of clear by the time you get home (and then you can take a shower or be smelly by yourself, without judgment). Here are 11 foods that can make you smell bad.

Over email with Bustle, Susie Lemmer, running coach and personal trainer, says that spicy foods can create odors that can come out through your skin after consumption. Lemmer says, "the odor leaves your body through the pores in your skin." So, take it easy on the tabasco sauce, chili peppers and other heated sauces and ingredients when due.

According to certified healthy lifestyle coach, Liz Traines, over email with Bustle, "asparagus can create an odor through your urine." Ever notice when your pee smells kind of funky after eating asparagus? It's due to the mercaptan content that can transform into sulfur, and such smells can be "rotten" and radiate for a few hours, Traines explains.

Lemmer says that foods that are "high in oil content" can create smelly odors, and some examples include processed foods that are high in bad fats, as well as healthy fats, like "omega 3's found in fish." However, don't stop eating fish, as it's a great food item for health benefits; just be wary of timing of consumption and whomever you might be dining with.

Traines warns to be wary of garlic, as "it can make you smell bad and come off through your skin." To complement her advice, I can share a personal tip: if you want to see just how connected your skin and digestion are, you can stick a clove of garlic in your sock and walk around for the day. In a few hours, you'll notice the taste of garlic in your mouth! (I've tried it; it's real.)

Experts at MayoClinic said that onions can create bad odors following consumption, as when they are digested, they release sulfur compounds, which can pervade through your body's pores and might be noticeable to others. While onions are healthy and add tons of flavor, be careful of portion sizes and of the timing of your meal.

Justyna Trzesniowski, registered nurse, and former coffee barista told Medical Daily in interview that the "dry mouth" experience that appears after drinking coffee (due to dehydration, as well) can release bad odors that can come off through our breath and skin. Reason enough to ditch coffee? I don't know, but that's your call.

Due to sulfur compounds, vegetables in the cruciferous family, such as Brussels sprouts, broccoli, cauliflower and bok choy, among others, can create foul smells that can last for a few hours; however, a 2010 study in the Journal of Food Science found that drinking milk after consuming these foods could counter the effects.

According to a 2006 study published in the journal Chemical Senses, men were seen as more attractive when they did not consume red meat, as opposed to those who did, by female participants. So, before ordering the steak for dinner, consider opting for vegetarian meals or poultry, instead, if you have somewhere important to be or want to make a great (and great smelling) impression.

Kristine Clark, director of sports nutrition at Penn State University, said over interview with msn that eating a diet too low in carbohydrates and fiber can create a "sour" taste and odor that can be emitted from the mouth, leading to a stench that can permeate the air. Clark recommends eating fruits, vegetables, whole grains, beans, and legumes for relief.

Lemmer says that spices in particular, instead of merely just hot, spicy foods and seasonings, can also create bad odors, and curry is one particular offender that can be harsh and easy to detect. Curry is found in many dishes, such as tikka marsala and much of Indian cuisine, and while it's delicious, these effects can be consequential. Be mindful when eating Indian-influenced cuisine.

Having alcohol can make your body smell, so be wary when you go to your office's next happy hour. Choosing to leave two hours in might be smart, as that's the amount of time taken for the odor to start to settle in, as explained earlier by Jailman. Be mindful of how much you are drinking and when it might be time to say goodbye and head on home.

While many of these foods can be healthy, they can also release foul odors and should thus be consumed with caution. Knowing which situations might be better or worse for these offenders is important, and keeping things in moderation is always a great way to go regarding consequential foods and lifestyle habits.