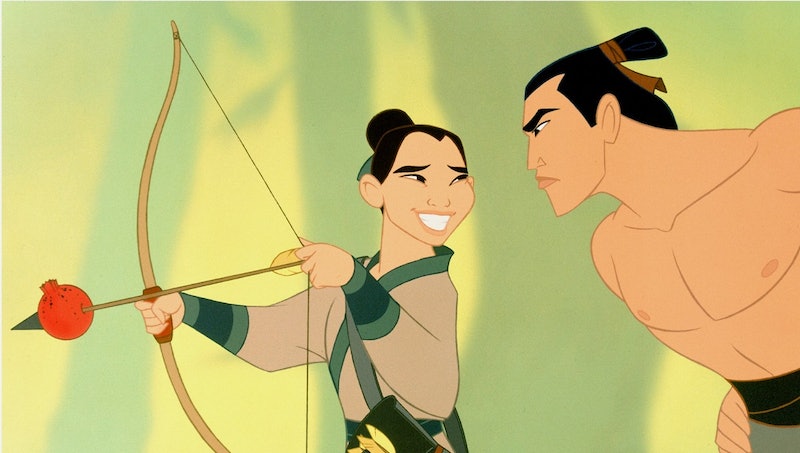 It's not exactly a secret that a lot of classic Disney movies were inspired by books. But what a lot of people don't know is that many of our favorite childhood movies have some pretty gruesome origins. The Brothers Grimm story of Cinderella read more like a horror tale than a children's tale, and let's just say that Hans Christian Andersen's "Little Mermaid" doesn't have the happy ending that Ariel was lucky enough to experience. Essentially, it's a bad idea to read the books that inspired Disney movies if you want to escape with untarnished childhood memories.

Still, I couldn't help but be curious as to the story behind my favorite Disney movie, Mulan. Even as an adult, I have an intense love for this movie thanks to its awesome musical numbers, beautiful animation, and of course, its inspiring eponymous character. Many Disney princess stories had a bit of a "damsel in distress" thing going on, so it would make sense that their original stories contained a bit of tragedy. But not Mulan. From the moment she appears on the screen, it's clear that she's there to kick ass and chew gum, and she runs out of gum pretty quickly. Surely a movie about a woman who saves China couldn't be based on anything too terrible, right?

Mulan's story can be traced all the way back to sixth century CE, when a poem called The Ballad of Mulan was written. As far as historians can tell, its subject, Mulan, wasn't a real person, but she ended up becoming a popular figure of Chinese folklore all the same. Because her story has been around for so long, there have been countless retellings of her tale. I opted to read a version that was retold by Song Nan Zhang and included some seriously beautiful illustrations.

The first thing I noticed upon opening this story was that I wasn't going to be busy for very long. Mulan's tale is a short one, and I expected there wasn't going to be a lot of room for tiny talking dragons or songs about making a man out of you. From the very start, though, there are similarities between the written version and the movie. Although Mulan is weaving at her loom instead of preparing to meet the matchmaker, it's still clear that she's much more of a young lady than a tough soldier. She becomes concerned when news of war starts making the rounds, and although this version of her has a sister and a younger brother, neither of them are able to take her aging father's place in the army. So she does just what we'd expect Mulan to do: she disguises herself as a man, saddles up, and goes off to kick some Hunny buns.

Well, not quite. The terrifying Shan Yu isn't a part of this story. In fact, the army Mulan helps fight against isn't specified, but historically speaking, it definitely wasn't the Huns. During the time The Ballad of Mulan was written, northern China was under pretty steady attack from foreign tribes during a time when the nation was going through countless troubles, including civil war. Mulan likely wasn't worried about one group of invaders, but many... and this time, she didn't have a lucky cricket to help her out.

Like the Disneyfied version, the original Mulan remained a family woman even during her time learning to become a badass. She spends a few lines of the poem being homesick and thinking she hears her parents' voices in the sounds of the river and neighing horses. But soon enough, it's time for battle. Aw, yeah. I was so pumped to see the OG Chinese heroine slay bodies. Even if they weren't Shan Yu's band of gray-skinned, greasy-haired minions, I still wanted to hear about how my girl was destroying them with her sword and rockets and martial art skills.

Unfortunately, that was probably a bit too much detail to include in a single poem. Mulan's battle experience is summed up pretty quickly with the sentence, "Mulan rode ten thousand miles to fight a hundred battles." First of all, what is she feeding that horse? And second of all... that's it? No epic avalanche? No blowing people up with fireworks? No seducing the bad guys before smashing their heads in with fruit? OK, maybe all that Disney magic set my expectations a little too high, but I expected a little more than one sentence to describe Mulan's adventures in butt-whooping. The rest of her time at war reads a bit like a flashback from an old TV episode: The war raged on. Battles were fought. Good people died. Mulan continued to be awesome.

My disappointment in the lack of detail was soon replaced by excitement, though. Unlike in the movie, in which Mulan is injured, revealed to be a woman, and brings dishonor upon herself and her cow, the first Mulan spent a whopping ten years keeping up her facade. By the time she's finished, she's been promoted to a general, and no one except her family knows that she's actually a woman. The emperor heaps praise upon her and offers her anything she wants, but her greatest desire is simply to return home to her family. Sound familiar?

As soon as Mulan gets home, she gets right back to her ladylike ways. After she changes into a dress, does her hair, and puts a little makeup on, she walks out to find her comrades standing there expecting to see their manly general still looking manly. When they see Mulan in all her glorious femininity, they're amazed rather than repulsed. They ask how they fought beside her for so long without realizing who she truly was, and she replies with this bit of wisdom that I kind of want printed and hung above my bed: "They say the male rabbit likes to hop and leap, while the female rabbit prefers to sit still. But in times of danger, when the two rabbits scurry by, who can tell male from female?" PREACH, sister.

The Ballad of Mulan and the Disney version might have plenty of differences, but at their cores, they're both empowering stories of a brave young woman who selflessly risked her life to protect her family and country. Both versions of this iconic warrior are symbols of girl power, showing that women can be feminine and tough at the same time. I still prefer the movie's take on the story, mainly because I love action and talking animals and watching Mulan ruin the matchmaker's day, but it was fascinating to read the story that inspired the creation of one of my all-time favorite films. Most of all, I was relieved that the original Mulan's tale had a happy ending. Given the way the stories of so many of yesteryear's heroines ended, I was glad to know that Mulan didn't end up getting beheaded or exiled for pretending to be a man. In fact, her comrades were way more progressive in their thinking than Shang was in the movie... and as far as the story tells us, none of them tried to pull a 180 and start hitting on her when they found out she was actually a woman.

Now that I've finally read this legendary story, I feel like I can appreciate the movie even more than I did before. Whether you lived hundreds of years ago or were around in 1998, Mulan is truly an unforgettable character who leaves you no choice but to feel like you're a woman who can conquer the world.

More like this
Rupert Grint Just Shared A *Major* Update About Ron Weasley’s Future
By El Hunt
Anne Hathaway Shared A "Thrilling" 'Princess Diaries 3' Update
By Darshita Goyal
Netflix Shut Down 'Bridgerton' S3 Rumours About A “Very Dark” Storyline
By Bustle
Jessica Simpson On The Time She Was Pursued By A Backstreet Boy & An *NSYNC Member
By The Editors
Get Even More From Bustle — Sign Up For The Newsletter
From hair trends to relationship advice, our daily newsletter has everything you need to sound like a person who’s on TikTok, even if you aren’t.