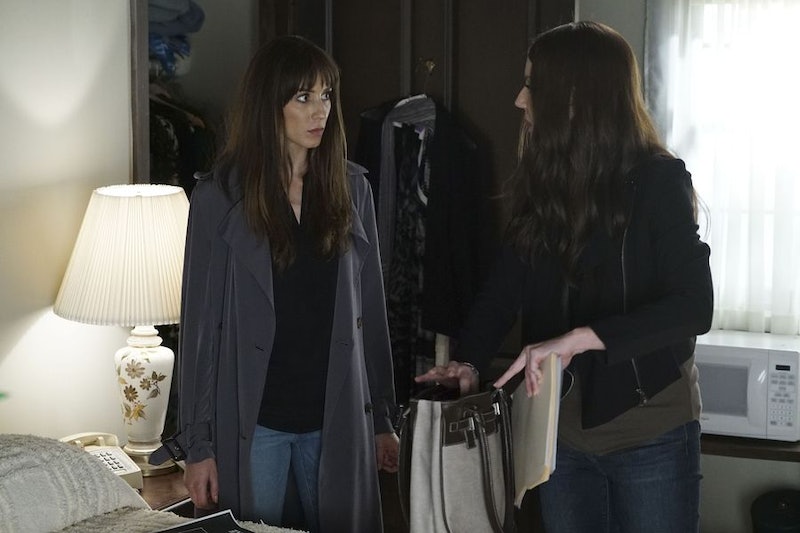 Have you recovered from that deadly showdown in the Pretty Little Liars Season 7A finale? Yeah, me either — because, at this point, the body count remains unknown. It's safe to say that Noel Kahn is a goner (I mean, the guy was literally decapitated) and the lives of Toby and Yvonne hang in the balance. But, most importantly, our beloved Spencer was shot and fighting for her life as the finale came to a close. As if that wasn't shocking enough, Mary Drake told Spencer that she's her mother on Pretty Little Liars. Although I'd take anything Mary says with heaps of salt, it's hard to deny that clues from past seasons indicate Spencer is Mary's daughter.

I know, I know — it's probably not going to be that simple. In fact, I. Marlene King told Entertainment Weekly that we won't learn the identity of Mary's second child until Season 7B. So, what gives? Bustle's Kaitlin Reilly theorizes that Mary was Veronica Hastings' surrogate, which would explain why she displayed maternal instincts towards Spencer in the finale's last scene. This theory would mean that Mary and Spencer share a mother-daughter connection, despite the fact that Mary isn't technically Spencer's biological mom. And, it would also mean that Mary still has another biological child out there somewhere who will be revealed in Season 7B.

Regardless of how Spencer came to be, I think it's clear that Mary was involved in some way. And, despite King's comments, I'm not ready to rule out the possibility that Mary is truly Spencer's biological mom. The clues about Mary and Spencer's connection go back several seasons — in fact, we may have been given hints about Spencer's parentage before we even met Mary Drake. Let's take a look at clues from past seasons that we missed — because, you know, we didn't know that Mary existed.

In this creepy Season 4 scene, viewers saw Jessica DiLaurentis creep up behind Spencer as she looked out her window. When Spencer turned around, Veronica was standing there asking if Spencer was OK. Revisiting this scene, it seems like the woman behind Spencer must have been Mary Drake — and the sudden switch from Mary/Jessica to Veronica indicates that Spencer and Mary have a maternal connection.

In Season 5, Spencer entered A's vault and a masked individual (who was later identified as Charlotte) appeared behind her. She later told the Liars that the presence felt familiar — like a "cousin" or a person she knew from a long time ago. The person behind Spencer was Charlotte, so that comment makes a ton of sense — the two are either sisters or half-sisters.

Then there's the matter of the video in the vault, which takes place at Campbell's farm. Jessica tells Charlotte and Jason to "kiss their little sister." I originally assumed that Jessica was holding baby Ali in her arms — but what if Jessica was behind the camera? In that scenario, Mary was holding Spencer as Jason and Charlotte said goodbye to her before she was taken in by the Hastings family.

3. Everything Comes Back To Radley (Season 6)

This show's tagline should probably be "everything comes back to Radley." We know that Peter Hastings had an affair with Jessica, but it's not that far-fetched to theorize that he also engaged in a relationship with Mary while she was a patient at Radley. This could definitely explain why he was so hellbent on shutting down the institution before any more family secrets emerged.

And, I keep coming back to Spencer's haunting dream sequence that takes place at Radley. The scene featured only Spencer and a character credited as "Creepy Dancer" (played by Maddie Ziegler). Rewatching the scene with Mary in mind, it seems like Ziegler's character could be a young version of Mary Drake.

She clutched her stomach, which implied pregnancy, and there was no background music — just screams and cries that sounded like childbirth and a newborn baby. The room in this sequence was almost definitely Radley's "delivery room" — when Ziegler's character exited the scene, Spencer looked down and saw a pair of slippers that read "C. DiLaurentis." Were Charlotte and Spencer born in the same room? I definitely wouldn't rule it out.

Is Mary Spencer's biological mom, her surrogate, or is this entire plotline a major red herring? We'll have to wait until April 2017 to find out.

More like this
Everything To Know About A Million Little Things' Reported Final Season
By Brad Witter
Kaley Cuoco & Tom Pelphrey Just Made Their First Public Appearance As A Couple
By Hugh McIntyre
'Ghost In The Shell: SAC_2045' Was Only Supposed To Last Two Seasons
By Kadin Burnett
What’s New On Netflix: 'Stranger Things' & 'Somebody Feed Phil' Return
By Arya Roshanian
Get Even More From Bustle — Sign Up For The Newsletter