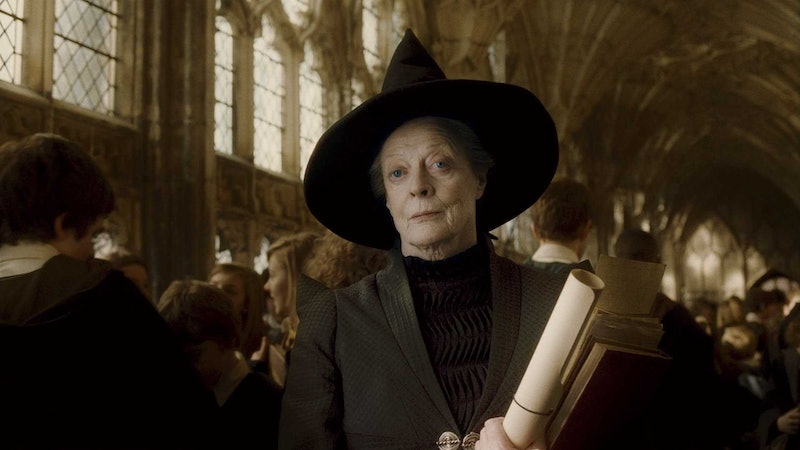 All the Potterheads were clearly born under lucky stars, because 2016 is the magical year that just keeps on giving. Hot on the heels of the release of the script version of Harry Potter and the Cursed Child , J.K. Rowling released even more Potter news with the launch of three new shorts about Hogwarts. Like any fan, you're probably wondering what's new in the Harry Potter eBook shorts. After all, if you're not fully informed, how else will you continue to clean house at Harry Potter trivia nights all up and down the island of Manhattan while blatantly ignoring your adult responsiblities? (Sorry not sorry, y'all.)

The eBooks are actually a unique situation for J.K. Rowling, because while some of the content is brand new, a lot of it is actually preexisting on Pottermore. Eagle-eyed fans who have been keeping up to date with the website after its relaunch in 2015 might recognize a lot of the information in the new eBooks, put together in single, easy-to-access narratives for the first time. The books, titled Hogwarts: An Incomplete And Unreliable Guide; Short Stories from Hogwarts of Heroism, Hardship and Dangerous Hobbies; and Short Stories from Hogwarts of Power, Politics and Pesky Poltergeists all have interweaving stories and facts about characters we love, characters we barely met, and the histories of landmarks from our favorite series. So if you truly want to be the Harry Potter aficionado you still shamelessly claim to be in adulthood, you might want to get #learnt by heading to Pottermore, where the books are on sale for $2.99 each.

So what exactly can you expect in terms of ~new content~ in these books? Here's a preview of the kind of content you can expect in these eBook shorts.

Someone's Finally Hustling For Us Hufflepuffs

You know how everyone's like, "Lol, those Huffepuffs, they're good at finding stuff and their dorms are near the kitchens"? Well friends, we are so much more than that. We are Cedric's ridiculous mane of hair, we are Tonks' tenacity and strength, and now, thanks to these eBooks, we are also indisputably the Hogwarts House with the coolest common room. And if you don't believe it after reading, then we'll just go ahead and douse you with vinegar. (No, seriously, guys. Read it. We will.)

Among the backstories we visit in these texts is that of the OG Badass Witch, Minerva McGonagall herself. Pottermore has already gone into some of McGonagall's past to give her the major street cred she deserves (girlfriend endured three generations of Potters, for Peeves' sake), but the eBooks shed some major light on them. Apparently she is so powerful that she showed her first signs of being magically-inclined within hours of her birth, already summoning stuff to her crib. The rest of us didn't even have the wherewithal to open our dumb baby eyes for the camera. Pfft, us. But seriously, if you want to catch up on the life and times of everyone's fiercest role model, this is the place to do it.

Remus Lupin's Backstory Will (Duh) Tear You To Pieces

Every time I think I'm done crying over Remus Lupin, J.K. Rowling is like, "Ahaha, NO YOU'RE NOT." As promised, the eBooks explain more about Lupin's past, including a confirmation to readers that his werewolf condition was, as a lot of people suspected, meant as a metaphor for HIV and AIDS in the real world. The eBooks go into much further depth of Lupin's past with a short story explaining his family's history and how he ended up becoming a werewolf in the first place (not-spoilery spoiler: it will cause you a lot of sad-motions).

The eBooks have so much more than that to offer, though, including all sorts of trivia about Hogwarts, insights into characters old and new, and explanations for the origins of a lot of J.K. Rowling's ideas for the Wizarding World. Whether you're here for the feels or here to nerd out hard, you're going to be glad you gave these a read!

More like this
The 'Hocus Pocus' Sequel Finally Has A Release Date & It Makes Total Sense
By Shannon Barbour and Radhika Menon
16 Novels That Paint A Realistic Portrait Of Abortion
By K.W. Colyard
Lauren Rae Is Bringing Back The Sex And The City Vibes In Her New Memoir
By Shahed Ezaydi
“The Door Is Always Open” For Another 'Breaking Bad' Spin-Off, Says AMC Boss
By El Hunt
Get Even More From Bustle — Sign Up For The Newsletter