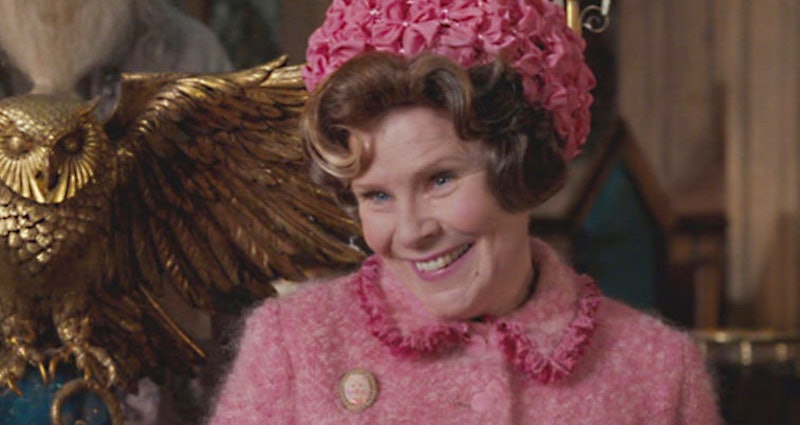 There are characters you love. There are characters you love to hate. And then there is Dolores Umbridge from the Harry Potter series, quite possibly the most hated character in all of fiction. Yes, she's technically not as bad as Voldemort or Bellatrix Lestrange. Technically. But Umbridge is a much more realistic breed of evil: the cruel, saccharine, racist teacher who gaslights her students and wears too much pink. So here are some revolting facts about Dolores Jane Umbridge.

Unless you've been living under a rock for the past few months, you've probably heard about the three new Harry Potter books that just arrived from Candlewick Press. The Pottermore Presents series is a mash-up of Pottermore content along with brand new stories, facts, and insights from J.K. herself. This is great news for all Potterheads, especially the people like me who are a little too lazy/confused to figure out how to unlock content on Pottermore.com.

Along with all the fun stuff, Rowling is also throwing us some new info on our favorite least favorite teacher, Professor Umbridge. Did you ever wonder about Umbridge's family life? Or if she ever had a real cat beyond those cutesy kitten accessories? No? Well get ready to find out anyway, because here are some of the most interesting, distasteful Umbridge facts:

1. Her mother was a Muggle

Umbridge loved to talk up her "pureblood" wizard heritage, but her mother was, in fact, a Muggle named Ellen Cracknell. Whoops. Young Umbridge resented her mother for "muddying" her family tree, and when she was fifteen her parents split up, and she went to live with her wizard father.

2. Her father was a janitor

Her father was a wizard... but not a very impressive one. Orford Umbridge worked in the Department of Magical Maintenance at the Ministry of Magic for his whole life, and was never promoted. Even though Dolores chose him over her mother, she hated his lack of ambition. Umbridge convinced her father to take an early retirement when she started working at the Ministry. She then denied being related to the Umbridge who used to sweep the floors, if anyone asked.

3. She has a Squib brother

Fan theory that Filch is secretly Umbridge's long-lost brother? Or Uncle Vernon? OK, so probably not. But Umbridge did have a brother who was a Squib, and couldn't do magic. She and her father blamed her Muggle mother for this, and Ellen Cracknell took her son with her when she left Orford. Dolores never saw her brother again (and she was pretty much fine with that).

...but not for lack of trying. As Umbridge clawed her way up the ranks of the Ministry, she tried to catch the eye of one of her superiors. Any superior. She was hoping for a powerful husband to raise her status, but anyone who got close to her soon realized that she was a prejudiced, sadistic witch.

5. She only likes decorative kittens... not real kittens

Her Patronus might be a Persian Cat, but Umbridge only likes decorative kittens. She finds the real thing "inconveniently messy." And the higher her rank, the more she would deck out her office with frills and sickly-sweet kitten decor.

6. She has a phobia of half-humans

You probably figured this one out from the books, but Umbridge hates semi-humans like Centaurs, Merpeople and Half-Giants. She has an irrational fear of these magical creatures, and lobbies against their rights. She also hates anyone who attempts to challenge her bigoted worldview.

7. She’s one of two people to leave a scar on Harry

...and the other is Lord Voldemort. So maybe she is almost as bad as Voldy. Umbridge's "detentions" left Harry with a permanent scar on his hand reading "I must not tell lies." Side note: that quill that carves words into people's flesh can't possibly be a legal teaching aid, even in the Wizarding World. Isn't Umbridge supposed to be all about following the rules??

8. She was convicted of the torture and death of several Muggle-borns

GOOD. Apparently, after the events of The Deathly Hallows, Umbridge was tried and convicted of torturing and imprisoning Muggle-borns unfairly during Voldemort's regime... and not all of those Muggle-borns survived Azkaban. Glad to hear that Auror Harry didn't have to run into Umbridge at work all the time.

9. Her name means sorrow and offense

Dolores means "sorrow," from the Latin world "dolor." Umbridge is Rowling's play on the word "umbrage." To "take umbrage" means to be offended, and Dolores Umbridge is easily offended by anyone who doesn't agree with her narrow-minded thinking.

10. She’s based on a real teacher that J.K. Rowling had

Rowling, being the class act that she is, doesn't specify which teacher was the inspiration for Professor Umbridge. But she does say that Umbridge is loosely based on a former teacher who disliked her instantly, and who wore a sickly-yellow bow in her hair. Rowling also drew inspiration from a former co-worker who decorated her desk with pictures of cuddly kittens, and who was a spiteful, intense advocate for the death penalty. Delightful.