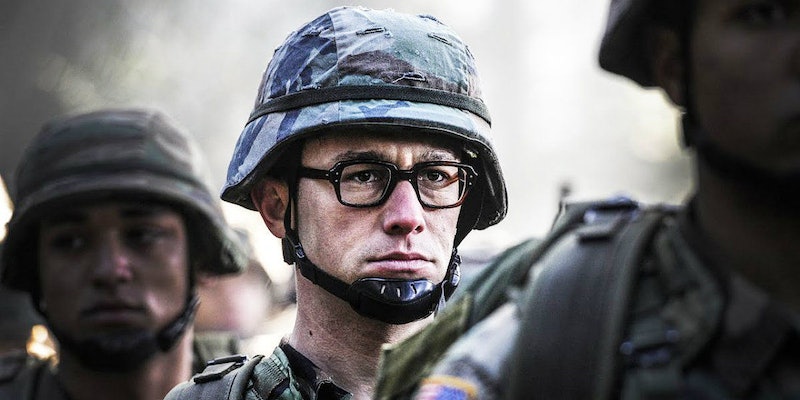 The most controversial film of the year has arrived. Oliver Stone's Snowden will definitely have people talking, since the movie is a biopic about the life of one of today's most polarizing figures: Edward Snowden. To some, the alleged NSA leaker is a hero for putting himself at risk by exposing the U.S. government's illegal spying on its citizens. To others, he's a traitor to his country and a puppet of foreign interests. But in telling his story, one must strip away any opinions on Edward Snowden and leave only the facts. So how accurate is Snowden ?

According to the man himself, it's pretty accurate. Snowden made a surprise appearance, via livestream, directly after a screening of the film at this year's Comic Con. Director Stone was in attendance as well, and both participated in a brief Q&A with the audience. Naturally, someone asked Snowden how accurate the movie was compared to what actually happened in his life, and according to IndieWire's Liz Shannon Miller, he said, "In terms of the actual issues, it's pretty on the money." However, not everything in the film is fact. Like most movies based on true stories, some details of the story were changed for dramatic effect.

For one, Snowden's real NSA boss didn't actually share a name with the villain from George Orwell's 1984 . That was Stone's less-than-subtle nod to the big brother aspect of the government agency. "We made [actor] Rhys Ifans the composite of [people] who were in senior positions of authority," Stone told CNET's Laura Hautala. "Ifans, who we called [Corbin] O'Brian after the character in 1984, intervenes into Snowden's life very personally. The surveillance state comes home to roost."

Another Hollywood touch comes when Snowden breaks both of his legs during basic army training. The film depicts this event by having him jump from his top bunk and breaking both legs upon landing. The actual breakage occurred while doing something far less mundane, as Snowden told The Guardian he broke his legs during a training exercise.

Perhaps the movie's most famous fib comes in the form of a Rubik's Cube. In the trailer, quite dramatically, Snowden is seen sneaking out the NSA files hidden inside the plastic puzzle, and casually tossing it to a security guard on his way out of the building as he passes through a metal detector. In real life, Snowden has never revealed his actual method of smuggling information, but Stone revealed that the Rubik's Cube idea did come from Snowden. "It was a good idea. Thanks, Ed," Stone said at Comic Con, according to IndieWire.

So even though some characters and events are embellished here and there, it appears that the movie is mostly true. It depicts Snowden's time before working for the NSA; his stealing information, fleeing the country, and leaking of said information to journalists Glenn Greenwald, Laura Poitras, and Ewan MacAskill; and even his relationship with girlfriend Lindsay Mills. So overall, I'd say Snowden does a pretty good job of presenting the facts of Edward Snowden's story... something even Edward Snowden himself has said.

More like this
Olivia Rodrigo’s Song Dedication To 5 SCOTUS Justices Sent A Strong Message
By Grace Wehniainen
'Criminal Record' Is The 'Doctor Who' Reunion We’ve All Been Waiting For
By El Hunt
Jurnee Smollett’s Heart Is Healing
By Rebecca Carroll
What Is Miles Teller's Net Worth? How The 'Top Gun: Maverick' Star Made His Millions
By Meg Walters
Get Even More From Bustle — Sign Up For The Newsletter