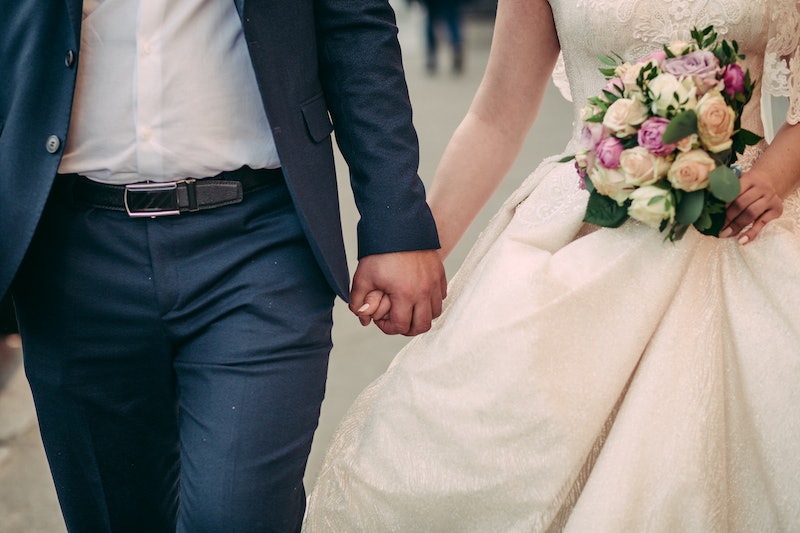 In a quest to find the happiest state (my home state New Hampshire came in at number 11, thank you very much), Wallet Hub studied data from the U.S. Census Bureau, Bureau of Labor Statistics, Council for Community and Economic Research, Centers for Disease Control and Prevention, and more. One of the factors that they looked at was divorce rates in the U.S. — and there was a big range.

So where is the area with the highest divorce rate? Washington DC, with a 31 percent rate divorce rate. That's nearly one in three. The lowest was Utah, which at 15.97 percent, was almost half of DC's rate. Utah also came out as number one for the happiest state to live in. So how do you make those marriages work?

Firstly, let me just say that not everyone wants to get married and that's OK, and it's something society (and science) tends to forget. "I think that anything that is disrespectful should always be refrained from expressing," zen psychotherapist and neuromarketing strategist Michele Paiva tells Bustle. "Live and let live."

And you know what? I don't think divorce is the worst thing in the world. As much as you should stick with your partner through tough times, if you genuinely aren't good for each other, you're better off having a family happily divorced than unhappily married one.

But obviously, if you're married, ideally you stay happily married. So what's the best way to stay together? Here's some advice from the experts:

A lot of times relationships break down because you fall out of love, but it's more complicated than that. "I think the idea of falling out of love is a bit more multilayered than it sounds at first glance. Relationships take work. The idea of two people falling blissfully in love and always being exactly attuned to what the other needs is very unrealistic." relationship therapist Aimee Hartstein, LCSW tells Bustle. "... However, one of the best predictors of a good relationship is how hard both parties are willing to work at things."

Every relationship, no mater how strong, takes work sometimes— you have to be prepared to do it.

One of the reasons a lot of people break up is that they buy too far into the 'fantasy' version of their partner and don't really look at the reality. “Many people break up around the one-year mark because they tend to realize that they are simply not as into their mate as they thought they were,”author and relationship expert Alexis Nicole White tells Bustle. “For instance, we know that around the three-to-four-month mark, we know that the representative [image] typically fades away.”

You need to give yourself time to get over the honeymoon phase and settle into the more comfortable phase. It may be that you genuinely fall out of love or it might be that you're just disappointed that it's no longer the early days. Make sure you take the time to realize which it is.

A study from University of Georgia looked at 468 married couples and found that showing gratitude was a good predictor of marriage quality. How do you do it? Well, there's the obvious saying "Thank you", but you can make it more special than that. "Do something for them that they do not like to do without asking," Dr. Ramani Durvasula, a licensed clinical psychologist and author of Should I Stay or Should I Go: Surviving a Relationship With a Narcissist tells Bustle. "But do it without making lots of noise about it. For example, take the car in for an oil change, clean the toilets, or weed the garden."

Just to do something to show that you're glad they're there.