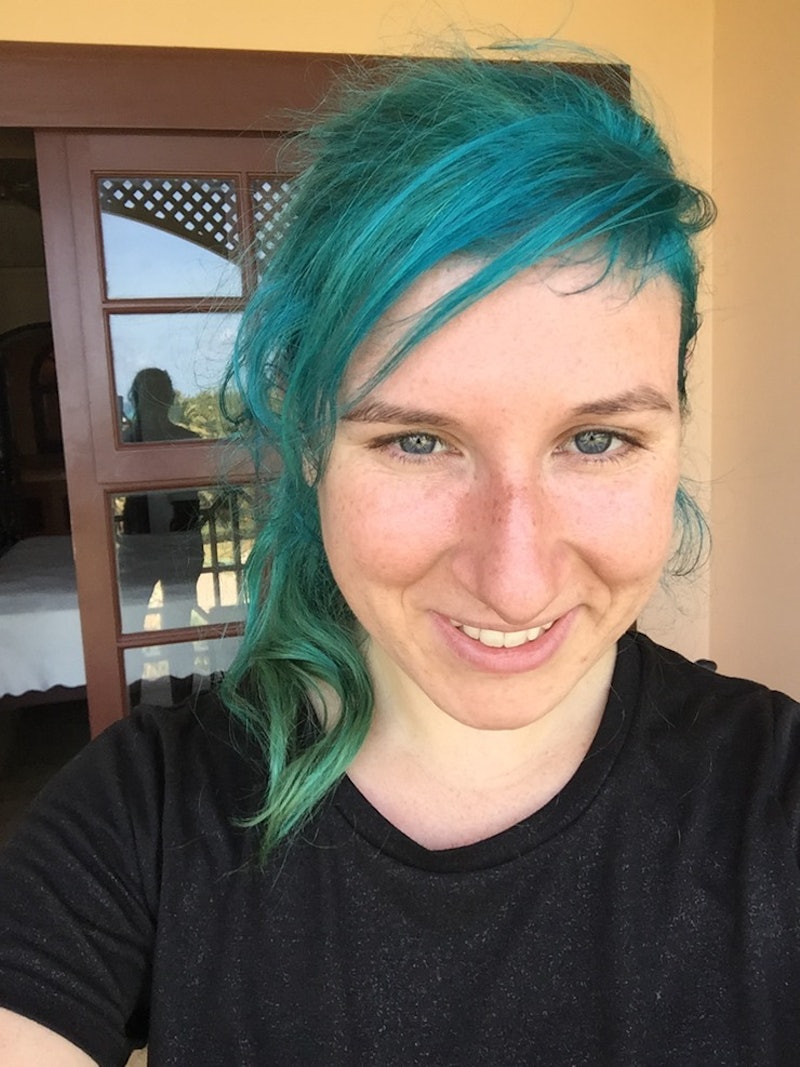 For years, I had this fantasy that one day, when I was grown up and self-actualized, I would have blue hair. But dyeing it always seemed like an act reserved for an older, braver version of myself. I wondered how people would treat me differently with colored hair that was a shade not found in nature.

But this summer, I decided that the haters were not my problem. I was going to do it and not pay attention what anyone thought — except, that is, for the purpose of an experiment: I would document how my hair color affected the way people treated me.

For such a big decision, I honestly didn’t put all that much thought into it. I googled “blue hair” and browsed the image results until I found one I loved, which faded from turquoise at the top to green at the bottom. I decided to go to Posh in San Francisco at a friend’s recommendation, showed the photo to their colorist Whitney, and put the fate of my hair into her hands.

I had a brief mid-appointment freakout when I saw myself blonde, and then another one when I learned they had to cut off several inches to avoid damage. (Bleaching kind of destroys your hair, so the ends don’t always hold up.) But afterward, I looked in the mirror and for the first time, I thought I looked like myself. Ironic, I know, since I looked as different from the way I was born as possible. But I finally felt I had hair as unique and colorful as I was.

From the moment I stopped out of that salon, people were already treating me differently. Here are some of the biggest changes I noticed.

On my way home from the salon, I received three comments from men standing on the street. One yelled “nice hair,” another shouted “I like your hair,” and another stopped me to interrogate me about exactly what color it was. Suddenly, I couldn’t tell if I was being genuinely complimented or catcalled. The usual “hey beautiful” leaves no doubt, but the first two comments were totally ambiguous. Someone could’ve said that with no interest in dating me.

Regardless, whether his intentions were sexual or not, the last one demonstrated an entitlement to my time characteristic of street harassment. Some people with tattoos have observed this as well: When you have an unusual physical feature, people tend to take it as an excuse to demand your time and violate your privacy.

It could’ve been a coincidence, but on my way to San Francisco, when I still had brown hair, I didn’t get caught for bringing an extra carry-on bag onto the plane. But on my way back to New York, they stopped me at security and I had to consolidate two bags into one. It was when I took a trip to Barbados, though, that things really got interesting.

While I was walking along the beach, a guy came up to me to sell me a drink, and one of the first things he asked was which drugs I was into. “You seem like the type of person who’s kind of crazy,” he said. We ended up talking for a few hours, and we ran into each other again a few days later. “Are you going to dye your hair back?” he asked me. “No. Why?” I asked.

I went out with a friend to a bar in New York, and we chatted with a few other customers. A few of them complimented my hair, which I’d gotten used to — it's a nice conversation-starter — but I wasn’t used to this: “I have a feeling the carpet doesn’t match the drapes, if you know what I’m saying,” one guy told me. Apparently, when your hair is blue, people suddenly feel licensed to talk about your “carpet.” Maybe it ties back into the whole sex-party stereotype.

I have pretty accepting, mind-their-own-business parents. They let me make my own decisions in peace. And, by the time they saw my hair, I'd only received compliments about it. So, I didn’t think it would be an issue with them.

But when I visited home, it was all they could talk about — and not in a good way. For the entirely of the two days I spent in their house, I received a deluge of questions and comments: “Why did you dye your hair?” “Have people been asking you why you dyed your hair?” “That’s not permanent, is it?” “Will you be able to change it?” “Were you trying to be really artistic or creative or something? “People have been complimenting you?” “Please don’t get blue shoes — it’ll just give you an incentive to keep your hair blue.”

I was shocked that the same people who had supported me when I decided to major in gender and sexuality studies, move across the country twice, and jetted off to Ibiza at a moment's notice had such strong opinions about something so personal and so unimportant. What was it about my hair that set them off?

Maybe, due to the same stereotypes that led to Barbados guy's drug and sex-party comments, they didn’t want to be seen as the parents of the blue-haired girl. Maybe these stereotypes shattered the image they had of their innocent, classy, goody-two-shoes brunette. Maybe it expressed a side of myself that I don’t normally show them, and they felt a little like they didn’t know me. Either way, their comments reflect the same idea the guys on the street and in the bar had: that fantasy hair is an invitation to comment on someone’s looks.

I hate to admit that despite my feminist ideals — heck, I refuse to shave my legs regardless of what anyone thinks — I was still worried about what my partner would think of my hair. Could he suddenly lose his attraction to me? The night before my appointment, I sent him the picture I was going to base the color job on, and to my relief, he liked it.

When I told an acquaintance that, she said something to the effect of, “Oh, good, so you have his permission.” The word “permission” irked me, mainly because I realized that’s how I’d been thinking about it too, even though I knew that anyone who would dump me because I had blue hair would be totally superficial. I suppose I’d internalized the belief that it was my duty to be aesthetically pleasing to men, even at the cost of my own autonomy.

My partner’s positive reaction to my hair was a relief for a deeper reason, though: His nonchalant acceptance of my blue hair reaffirmed that he knew me. My parents were probably didn’t think of me as the kind of person who would dye their hair blue, but he got it — which showed me he got me. Getting an email from him with the subject line “Hello beautiful woman with blue hair” made me feel seen for who I truly am.

When I was 14, I bought a shirt from Abercrombie that read, “It’s better to be brunette. Brunettes have beauty and brains.” Well, I’ve officially excluded myself from the Brainy Brunette Club, and I’m glad — because its rules are full of internalized misogyny. They’re the same rules stating that women with blue hair do lots of drugs, have lots of casual sex, aren’t desirable as daughters, and can be spoken to inappropriately in public.

In many ways, I identify with the fantasy-hair stereotype. I have an eccentric personality, I’m adventurous, and I love to go clubbing. The fact that people view me this way at first glance, rather than having an inaccurate or incomplete idea of me before they talk to me, is probably why I love my hair so much and feel so at ease with it. When people ask me why I did it, I tell them, “I was tired of hiding how outrageous I am.”

Since I can't do much about hair color stereotypes, I'm using them to my advantage by adopting the one that coincides with my personality. But that doesn't mean they should exist in the first place. You can be a blue-haired bookworm, beauty queen, engineer, or whatever. And, of course, you should be able to keep the hair you were born with without being labeled a dumb blonde or fierce redhead or shy brunette.

I didn't change when I dyed my hair blue, but the way people treated me did — and that means we have a long way to go before we stop judging people by their hair.