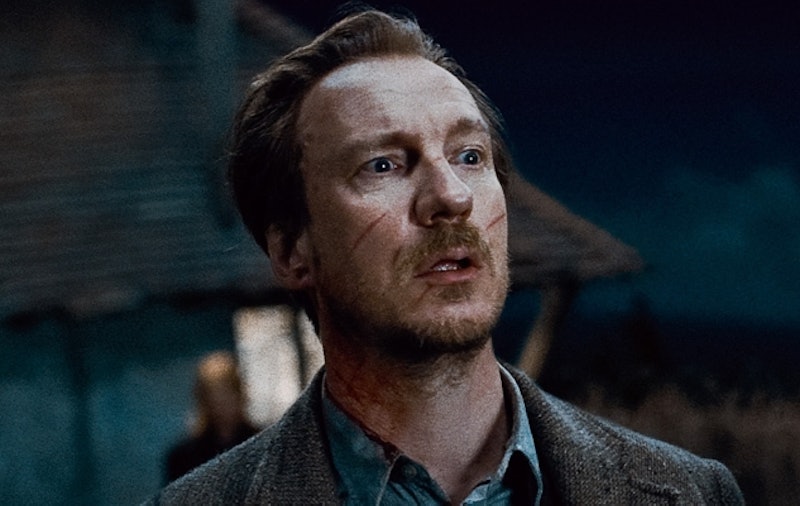 Everyone has their Harry Potter crush. There are Potterheads who go nuts for Hermione, or Viktor Krum, or Malfoy, or even Harry himself (I've never met anyone with a crush on Harry because that kid's a hot mess, but it's theoretically possible?). But when it comes to scruffy, older werewolf-teachers, there's only one wizard who owns all of our hearts. And that's the sad, sexy Professor Lupin. So here are just a few of the times you fell in love with Remus Lupin.

I mean, yes, I know that Lupin had his faults. He didn't tell Harry the full story during Prisoner of Azkaban. He's a disaster with the ladies (if you like Tonks just date her, Lupin, stop being so dramatic). He let his friends bully baby Snape. He came very close to abandoning his infant son. But he's also one of the kindest, most even-tempered characters in the Potter-verse. He's a talented teacher, an adept wizard, and a loyal friend. Plus, he's so sad and sickly and dangerous, and I want to sit on the couch and eat take out with him while he tells me all about fun monsters.

So if you're looking to reminisce about everyone's favorite werewolf, here are some of the moments that made you fall hard for Remus Lupin:

1. When he was all gross and sleeping on that train

Poor, shabby Lupin. The Golden Trio first comes across him sleeping on the Hogwarts Express, with his threadbare robes and his stubbly face. Later on we learn exactly why he's such a mess, and why he can't hold down a job, but in that first scene we just want to give him a hot bowl of soup and maybe some soap.

2. When you realized he carries chocolate with him at all times

There are three things I look for in a man: handsomeness, ability to transform in a monster that can kill me, and how much chocolate he is carrying on his body. And Lupin always seems to be carrying chocolate. From the moment he hands Harry a bar of chocolate to counteract the symptoms of a Dementor attack, we know that Lupin is going to be our new favorite Hogwarts teacher. I don't know how he can afford an infinite supply of high-quality chocolate when he can't afford new robes, and I don't care.

3. When his teenage self insulted Snape through that map

Lupin is entirely civil to Snape (probably because Snape keeps him in Wolfsbane Potion). But we do get a glimpse of bad-boy teenage Lupin when Moony insults Snape through the Marauder's Map: "Mr. Moony presents his compliments to Professor Snape, and begs him to keep his abnormally large nose out of other people's business." And then adult Lupin has to just stand there and pretend not to understand what's going on.

4. When he had lots of complicated feelings about Sirius

Lupin, you sweet, beautiful idiot. Lupin had spent years believing that his best friend Sirius killed his other best friend, James. He lost all of his friends in one fell swoop during the First Wizarding War, and then had to deal with years of discrimination and unemployment. So when he finally reunited with Sirius, we all wanted to give him a big hug (slash maybe just a little bit watch them kiss?).

5. When he was the best teacher Harry ever had

Remus Lupin was the best Defense Against the Dark Arts teacher that Harry ever had... which isn't saying much. Still, he seemed like someone who genuinely enjoyed teaching. And when we realized that Lupin was not only a brave, chocolate-carrying wizard, but a fun teacher with a hands-on curriculum? We fell in love all over again.

6. When he taught us all about Patronuses

Without Patronuses, we'd have only half as many online Harry Potter quizzes. Lupin taught Harry how to cast the Patronus spell, but he also taught us all an invaluable lesson: summon your courage in the face of fear. And then a magical glowing animal will rescue you. It's definitely his finest moment as a teacher. It's also adorable because he's trying to protect his dead friend's son. Lupin is so cute and sad.

7. When he was so much more reasonable than the other Marauders

Fine, so he sat idly by and let his friends bully Snape in high school. That's not great. But Lupin is by far the most reasonable one of the group, and nothing is sexier than responsibility. When Harry sees teen wolf Lupin in the Pensieve, Lupin is very clearly the friend who tries not to instigate trouble. He'd make a great son-in-law.

8. When he stopped being a tool and married Tonks

No one plays hard to get like Remus Lupin. He made a big deal about being "too old" and "too poor" and "too much of a werewolf" for Tonks. But he got over himself eventually, and married her. And we all completely swooned, even though Lupin is just a little bit the worst.

9. When he stopped being a tool and accepted fatherhood

Lupin's lowest moment is easily when he goes running to join Harry and co because he's terrified of fatherhood. Oh, Lupin. He brands himself as so responsible, and then runs screaming at the first hint of responsibility. But when he owned up to his mistake and went back to Tonks and the unborn Teddy Lupin, we all forgave him. He's so handsome when he's being a neglectful father.

Nothing makes you fall for a character faster than their untimely death. Lupin died far too soon, leaving behind an orphan son. I mean... I guess I get what J.K. was going for with the next gen orphan thing. But it's just not fair. We miss you, Lupin.