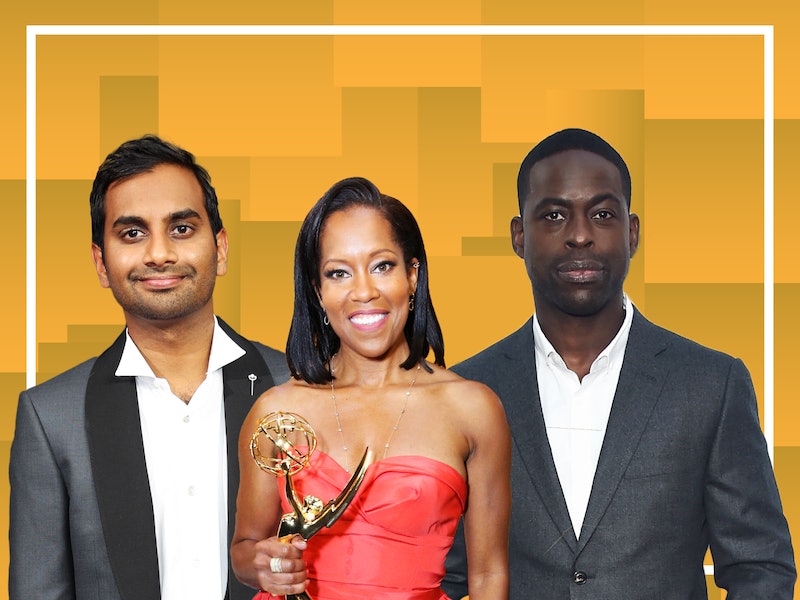 For two years now, I, and other people of color, have been forced to watch as actors of color were shut out of the main categories of the Oscars, proving that, despite the prevalence of movements like #OscarsSoWhite, outrage and protests don't equal immediate change. The Emmys stood on the exact opposite end of the spectrum, particularly in 2016, when not only were the nominees more diverse than they've ever been — people of color were nominated for Emmys in every leading acting category for the first time in 68 years — but the broadcast spent a considerable amount of time bringing diversity to the forefront. Between Jimmy Kimmel's diversity jokes, the numerous acceptance speeches that called for giving more visibility to actors of color and transgender actors, and the frequent sly references to the fact that the Emmys are beating the Oscars in the diversity game, you would be forgiven for thinking that, as far as television is concerned, the battle for diversity is basically won.

However, acting as though this fight is over will only serve to stagnate the progress that has been made and prevent us from moving forward even further. And we really, really need to move forward.

As Kimmel himself joked during his opening monologue for the ceremony, "In Hollywood, the only thing we value more than diversity is congratulating ourselves on how much we value diversity." Ironically, that was made very clear during the Emmys, when numerous jokes and statements were made about the whiteness of the Oscars. This ignores the reality that, despite the fact that this year's Emmys are incredibly diverse, "diverse" still means only 18 of the 73 nominees were people of color. I repeat: 25 percent of the nominees being people of color is what we're celebrating as the most diverse Emmys ever. That's not OK. It's an improvement, yes, and it's a great start, yes, but it's nowhere near a good picture of a truly inclusive television landscape.

It gets even worse when you consider the specifics of the spread of nominees. In the Limited Series or Movie categories, for example, the nominations were spread among cast members of the same show: The People v. O.J. Simpson: American Crime Story . So, of the 18 nominations that went to people of color, that does not mean that 18 individual shows had people of color being recognized for their talents. With only a quarter of the nominations overall going to just a handful of shows out there starring people of color, the phrase "most diverse Emmys ever" sounds less like something to be victorious about and more like something to be confused about. In 2016, our idea of being diverse is a quarter of the nominees and a handful of shows? There's so much work to do if that's where we're at right now.

Now, I don't want to devalue the Emmys for what they've achieved. I'm glad to be able to say that there has been an increase — by only two, but still an increase — in the number of people of color being recognized with a nomination at the ceremony between 2016 and 2015. I hope that number only continues to increase as we go forward, and hopefully by more than two. But I'm also wary about patting ourselves on the back about television being more diverse than movies, and thus the Emmys more diverse than the Oscars, when there's still such a long way to go. One small thing like having 18 nominees instead of 16 isn't going to be enough to make television as inclusive as it should be, especially when there are still whole shows on television with not a single person of color in the main cast — while the opposite can't be said for many shows with predominantly POC casts.

It's OK to congratulate ourselves on the progress we've made so far. As Kimmel said, Hollywood does love to do that, even more so than they love making any real change. But we can't let ourselves get so caught up in congratulating our progress that we don't immediately look to how we can make more.

We need to look to the future, a future in which a show without a POC in the main cast will be a rarity and not something that's still common place. We need to keep moving forward before we can really stop to pat ourselves on the back for how much has been accomplished. Because, the truth is, diversifying television isn't something revolutionary or something to be praised. It's something that should be as normal as breathing, that we shouldn't need to still think or talk about. As optimistic as that might be, that's the kind of future I want to live in.

More like this
Watch The 'Heartstopper' Cast Joyfully Dance To Whitney Houston at Pride
By El Hunt
Viktor Hargreeves’ Coming Out Scenes Are The Sweetest Part Of Umbrella Academy Season 3
By Gretchen Smail
What’s New On Netflix: Lana Condor’s Ghostly Comedy & A Sexy Reality Series
By Arya Roshanian
Here’s Everything Coming To & Leaving Netflix In July
By Grace Wehniainen
Get Even More From Bustle — Sign Up For The Newsletter