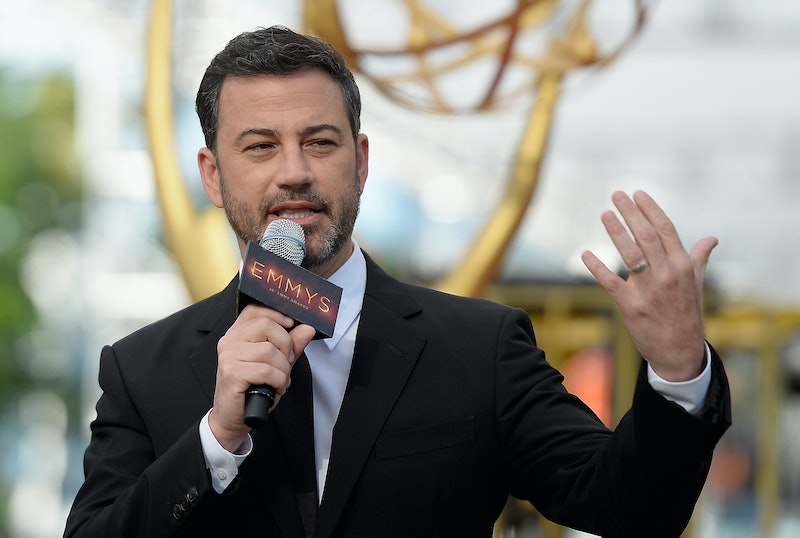 Expectations are high whenever a Jimmy is slated to host the Emmys. Both Fallon and Kimmel are happy-go-lucky dudes who we can depend on to toe the line with only slightly provocative jokes that make the crowd chuckle, along with some big stunts (see this year's dragon ride and Jeb Bush-as-limo driver bit). This year, however, Jimmy Kimmel joked about diversity at the Emmys, stepping a bit outside his usual comfort zone. But, seriously, only a bit.

As Kimmel went through the laundry list of topics to cover as he hosts the Emmys (Jeffrey Tambor's automatic win, Game of Thrones' automatic win, American Crime Story's automatic wins, Maggie Smith's automatic win that she inevitably won't be present for), he made his way to diversity of the guests and nominees, but he kept his joke brief and to the point,

Fortunately, for everyone in this room there are more parts and more roles than ever before, and more diversity than ever before. This year's nominees are the most diverse ever. And in Hollywood, the only thing we value more than diversity is congratulating ourselves on how much we value diversity.

The moment was capped off by Aziz Ansari turning around to hug Ty Burrell and drive the joke on home. It wasn't a very hard-hitting joke, certainly not a show-stopper, but it was hilariously on-point. In today's TV landscape, it can sometimes feel like we're doing a lot more talking about the importance of diversity than we are actually taking steps to create a more inclusive landscape.

Nowhere is that more obvious than when it came to the Oscars, which received criticism for having all-white nominees in the major acting categories in 2015 and, despite numerous assurances that measures were being taken to improve, repeated that very same thing in 2016. Kimmel alluded to this as well when he joked, "The Emmys, I'll tell you, the Emmys are so diverse this year, the Oscars are now telling people that we're one of their closest friends. We're not, by the way."

In that sense, Kimmel's joke is funny because it's so true. It sometimes feels like there are a lot more congratulations being handed out on showing even the slightest amount of diversity than there is actual change being made. Having a lot of shows coming out in Fall 2016 with female protagonists or feminist themes seems like a landmark moment as opposed to something that should be happening naturally and frequently, considering the fact that women make up over half of the world's population. Having shows like black-ish and Fresh Off The Boat on TV at the same time as shows like Empire, Power, and Atlanta seems like a victory, despite the fact that it shouldn't have taken until now to have multiple successful shows with a cast made up of predominantly people of color.

When are we going to get to the point on valuing diversity more than we value even the smallest hint of it in our media? It shouldn't be a victory; it should be our reality. That's the point that Kimmel is only hinting at with his joke, but one that resonates very deeply with me all things considered. Maybe one day this joke will be a joke that's funny because of how outdated it is rather than how real it is. But, for right now, I'll just keep laughing and keep hoping that diversity becomes less of a goal to strive toward and more of a real result that future generations can benefit from.

More like this
How Lady Gaga & Adele Are Closer To The EGOT All Of A Sudden
By Jake Viswanath
At 14, Tatiana Maslany Was Obsessing Over Tamagotchis & The Spice Girls
By Gabrielle Bondi
Naomi Osaka & Emma Raducanu’s Experiences Have Inspired A New Amazon Show
By El Hunt
Beyoncé & Madonna’s “Break My Soul” Remix Honors A Group Of Black Icons
By Stephanie Topacio Long
Get Even More From Bustle — Sign Up For The Newsletter