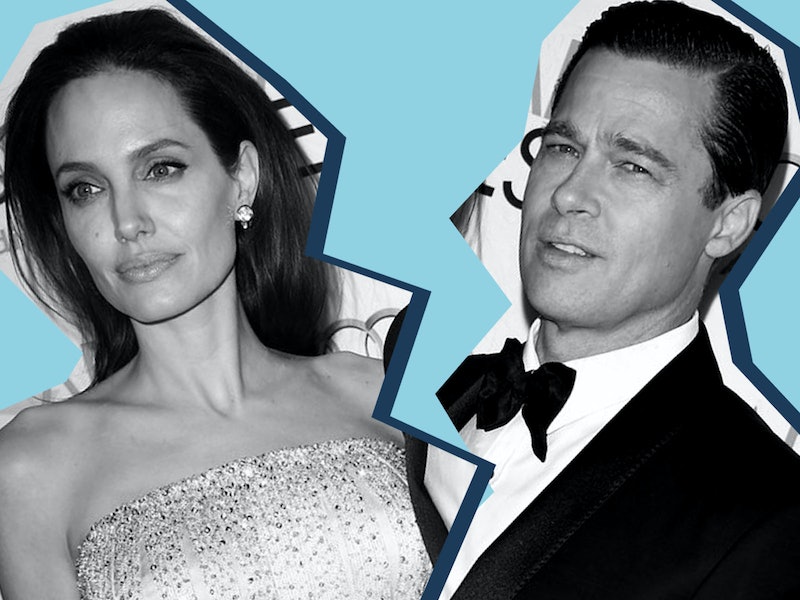 It's sad, but officially true: Angelina Jolie and Brad Pitt are getting a divorce. Jolie allegedly filed for divorce from Pitt on September 19, citing irreconcilable differences after two years of marriage and more than a decade together. Both Jolie and Pitt have both confirmed the divorce, releasing statements that put the focus on their six children. With that confirmation, the internet is now grieving over the fact that Hollywood's most glamorous couple is calling it quits and will never walk the red carpet together again. To cope, some are creating hilarious memes to cope with Pitt and Jolie's split, while others are just left wondering, does real love even exist between two huge movie stars anymore? But, despite Brangelina's love story being over, their romance will certainly not be forgotten...

...Thanks in large part to years of tabloids covering their every single move. Because you don't have time to research every moment of their love story, I've compiled a timeline of some of their most memorable moments. From Jolie and Pitt's controversial get-together to their unexpected end, and every wedding and birth in between, it's all here for you to peruse. A way to look back at the couple that, it turns out, were just too beautiful for this world.

Rumors start brewing that the co-stars are falling in love on the set of the movie Mr. and Mrs. Smith, which has the two playing a couple who turn out to be assassins hired to kill one another. Back then, the two denied the rumors, saying they were just friends. However, in 2006 Jolie would confirm to Vogue that the two fell in love on set, despite the fact that they weren't looking for a relationship:

Because of the film, we ended up being brought together to do all these crazy things, and I think we found this strange friendship and partnership that kind of just suddenly happened. I think a few months in I realized, 'God, I can't wait to get to work.' ...Anything we had to do with each other, we just found a lot of joy in it together and a lot of real teamwork. We just became kind of a pair.

Some were upset over Jolie's reveal, considering that, at the time of the filming of the movie, Pitt was married to Jennifer Aniston.

The two were photographed on a beach in Kenya with Jolie's son Maddox, all but confirming their relationship.

It was a 60-page photo spread in W Magazine that hinted at the domesticity Jolie and Pitt would enjoy later. The two posed as a 1950s couple in a spread dubbed "Domestic Bliss," which was seen as controversial since the photos were taken in March, around the same time Aniston filed for divorce. The Friends actress would famously tell Vanity Fair in September 2005 that Pitt had a "sensitivity chip that’s missing." She would then say of the photo spread, “Is it odd timing? Yeah. But it’s not my life. He makes his choices. He can do — whatever. We’re divorced, and you can see why.”

Jolie confirms that she is pregnant with her first biological child with Pitt, who had legally adopted Jolie's children, Maddox and Zahara. She didn't make the announcement to a magazine, but, according to People, instead told a charity aid worker in Santo Domingo, Dominican Republic, "Yes, I'm pregnant." Though it was her first biological child, Jolie was already mother to Maddox, whom she adopted from Cambodia, and Zahara, adopted from Ethiopia in July 2005.

According to the New York Daily News, Pitt legally adopted Jolie's children on January 19, changing their last names to Jolie-Pitt.

Jolie and Pitt give a press conference in Namibia days after welcoming their daughter, Shiloh, born May 17, to explain why they decided to have their child in Africa. In the video, she says they "wanted to find a place that was a beautiful place that our other children would enjoy. And they have, they've had an amazing adventure." She also said they had an important connection to the continent. "We just love this part of the world," she said. "Our other daughter was born in Africa and so this is a special continent for us."

On June 19, Shiloh would make her debut in People. According to the New York Daily News, Jolie sold the first baby photos of Shiloh to Getty Images so that she could keep the paparazzi away. It's been reported that People paid $4.1 million for them, and Jolie donated that money to an undisclosed charity.

The couple adopt a 3-year-old boy from Vietnam, who they named Pax Thien Jolie-Pitt. They are now the parents of four children, something Jolie told Hello! she was very proud of: "I have four children and caring for them is the most important thing for me at the moment. I am very proud and happy to be their mother."

After the birth of their twins Knox and Vivienne on July 12, the couple reveal their first photos of the newborns in Hello! and People. They were reportedly bought for $14 million, making them the most expensive celebrity pictures ever. Jolie and Pitt donated the money to charity.

In an interview with People, Jolie talked about what it was like to have six kids, saying, "It is chaos, but we are managing it and having a wonderful time. While Pitt simply said it was "still a cuckoos nest."

The usually private stars gave fans a look into their lives in another spread for W Magazine. This one was of Jolie, photographed by Pitt, displaying a week in her life at home with their children. The magazine's creative director said, "I wasn’t prepared for the beauty and intimacy of the images he made of Angelina and the children.”

After seven years together, the couple announced that they were engaged. It was surprising, considering how many times the couple implied they would never get married. But Pitt's manager confirmed the engagement to People saying, "It is a promise for the future, and their kids are very happy."

In an op-ed for the New York Times , Jolie revealed she had underwent a preventative double mastectomy, but also thanked Pitt for being "so loving and supportive." She wrote then, "We managed to find moments to laugh together. We knew this was the right thing to do for our family and that it would bring us closer. And it has." In March 2015, Jolie would reveal that she had her fallopian tubes and ovaries removed, too.

After a two-year engagement, the Brangelina tied the knot in a secret ceremony in Southern France. The couple would announce the nuptials to the Associated Press in a short but sweet statement that gave just the facts of the ceremony:

The representative, who spoke on the condition of anonymity because she was not authorized to be quoted by name, said Jolie and Pitt exchanged vows in a small chapel at the Chateau Miraval in the Provence hamlet of Correns.

While few details were shared about the wedding, what Jolie wore was revealed: a veil, which featured drawings from her kids. Jolie would also reveal a year later that they actually got married twice, once in the States and then again in France.

The stars famously met on the set of the 2005 movie Mr. and Mrs. Smith, but their next joint project on the big screen was not so lovey dovey. By the Sea, directed by Jolie, features the two playing an unhappy couple struggling to keep it together. It was ironic since they filmed the movie while on their honeymoon.

But, throughout promotion of the film, which hit theaters in the U.S. on November 5, Jolie was quick to say the couple in the film is not based on her own life. In an interview with Vogue for its November issue, Jolie said, “Brad and I have our issues, but, if the characters’ were even remotely close to our problems, we couldn’t have made the film.”

Jolie and Pitt's last interview together had the two celebrating their one-year anniversary while promoting By The Sea. The Today interview displayed a couple who seemed madly in love, holding hands and making jokes. At one point, interviewer Tom Brokaw called the couple's marriage "one of the most secure marriages in Hollywood" and, at the time, Jolie and Pitt agreed.

In a move that shocked the world, Jolie and Pitt both confirmed in statements that they were getting a divorce after the news was broken by TMZ. "This decision was made for the health of the family. She will not be commenting, and asks that the family be given its privacy at this time," read the statement to Reuters from Jolie's attorney, Robert Offer. Pitt released his own statement to People, which read, "I am very saddened by this, but what matters most now is the well-being of our kids. I kindly ask the press to give them the space they deserve during this challenging time." The internet handled it about as well as you might expect.

Breaking up is hard to do, especially when you're in the public eye. But, as fans, let's not forget about all the good times had with Brangelina.

More like this
Hilary Duff's Husband Matthew Koma Has Her Name Tattooed On His Butt
By Jake Viswanath and Stephanie Downs
Megan Mullally & Nick Offerman’s Relationship Includes Several Collaborations
By Caitlin Gallagher and Brad Witter
Gemma Atkinson & Gorka Márquez Are Strictly The Sweetest Couple
By El Hunt
John Corbett's Wife Bo Derek Once Revealed If She's Team Aidan Or Team Big
By Alyssa Lapid
Get Even More From Bustle — Sign Up For The Newsletter
From hair trends to relationship advice, our daily newsletter has everything you need to sound like a person who’s on TikTok, even if you aren’t.