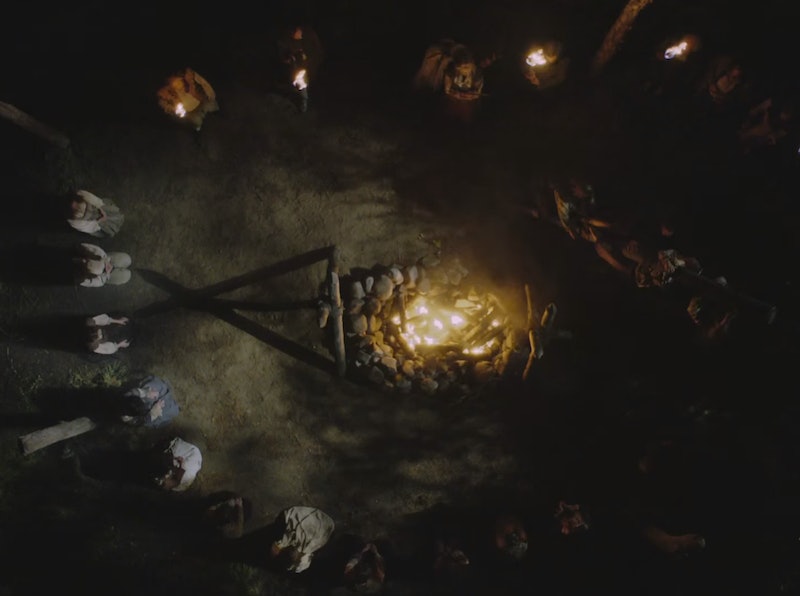 Although the Lost Colony of Roanoke has been intriguing people for centuries, a slew of TV fans are going to be newly into the mystery, thanks to mastermind Ryan Murphy. American Horror Story Season 6 is about Roanoke and although the series will most likely be heavily blending truth with fiction, the real-life story of Roanoke from the 1500s is utterly fascinating and scary even without Murphy's patented spin on it. And if you're craving to know more about the historical event that is inspiring the terrors of American Horror Story this season, then you should check out the Croatoan projects that have researched the lost Roanoke Colony and what happened there all those years ago.

If you're unfamiliar with the story of Roanoke, the brief history lesson is that the first British colony to settle in America did so on the North Carolina island of Roanoke. In 1587, the leader of the colony — John White — left to return to England for more supplies, leaving the rest of the more than 100 colonists there. A British war with the Spanish made it impossible for White to return to the New World immediately, so when he did come back three years later in 1590, he found the colony abandoned. The only clue to where the colonists possibly went to was that the word "Croatoan" was carved into a post and "CRO" was carved into a nearby tree.

On History's page about the incident, it says,"'Croatoan' was the name of an island south of Roanoke that was home to a Native American tribe of the same name." Because of that, some people have theorized that the colonists either were captured and killed by the American Indians or that the colonists went to live with the Croatoans. However, even four centuries later, no one knows what actually happened to the Lost Colony of Roanoke — and that's where these Croatoan projects come in.

The first project to use the name of the only message left by the colonists was formed in 1998, according to Encyclopedia Britannica. This Croatoan Project "provided archaeological evidence to back up the theory that the colonists moved to be with, or at least interacted with, the Hatteras tribe." The name for Croatoan Island is now Hatteras Island, Encyclopedia Britannica noted, since the name of the American Indians who lived on the island was actually the Hatteras Indians. This 1998 Croatoan Project researched the idea that the colonists had known the American Indians, which would make sense since the colonists were lacking the necessary supplies to continue on their own in Roanoke. (This lack of supplies might also explain why Kathy Bates is looking so rough in the previews for American Horror Story Season 6.)

When looking into if this Croatoan Project is still active, I found that Encyclopedia Britannica is probably referring to the Croatan [sic] archaeological project by East Carolina University in the 1990s. Led by Dr. David Phelps, this site collection at Cape Creek — which was the capital town of Croatoan at the time of the colony's disappearance — led to the discovery of a ring that dates back to the 16th century and was most likely owned by the British Kendall family.

Although members of the Kendall family were not part of the 1587 Lost Colony, the Kendalls were part of the earlier colonists who tried to settle in Roanoke. (The infamous Lost Colony was actually the third British colony to travel there, National Geographic reported.) While the ring doesn't prove that the Hatteras Indians had any interactions with the missing colonists, East Carolina University's library wrote, "The main importance of the ring is that it confirms Cape Creek as the site of Croatan during the period of the Roanoke Voyages and its interaction with at least the 1585-1586 colony."

Since that dig in 1998, other researchers have investigated the area, including the First Colony Foundation. But one other project with the name Croatoan has been created — the Croatoan Archaeological Society, Inc. — which formed in 2009. As National Geographic wrote, the Croatoan Archaeological Society sponsors annual digs at Cape Creek, which are supervised by Mark Horton, an archaeologist at Britain's Bristol University. Although East Carolina University may no longer be involved, volunteers keep searching for clues on Hatteras Island with the society stating on its website that, "The purpose of this project is to learn as much as possible about the history of Croatoan, modern day Hatteras Island, and the inhabitants of said island, via the scientific methods of archaeology."

While I doubt that Murphy's My Roanoke Nightmare is going to be anywhere near as scientific as these archaeological digs have been, the writers could use some of the artifacts that the Croatoan projects have discovered. And though archaeology may never successfully unearth the mystery of the Lost Colony of Roanoke, American Horror Story is sure to provide its own very non-scientific, but very entertaining, explanation.

More like this
Why Sadie Sink Is Hopeful Max Will Return In Stranger Things Season 5
By Brad Witter
6 Mind-Blowing Fan Theories About How Stranger Things Will End
By Kadin Burnett
What Working At Marvel Is Really Like, According To A 'Ms. Marvel' Co-Creator
By Gretchen Smail
'Friends' Creator Marta Kauffman Opened Up About Misgendering A Guest Character
By Grace Wehniainen
Get Even More From Bustle — Sign Up For The Newsletter