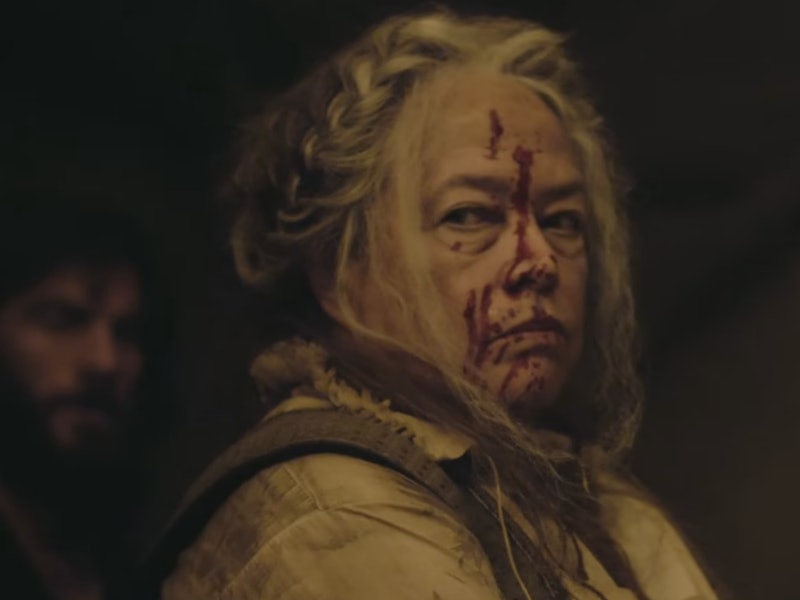 While every season of American Horror Story has layered story lines to follow, Season 6 might prove to be the most confounding. Not only was the theme kept top secret until Season 6 premiered, but after the first episode aired it wasn't entirely clear what time period American Horror Story is taking place in. With the seemingly modern couple of Shelby and Matt moving to North Carolina and the subtitle being My Roanoke Nightmare, I feel pretty safe in assuming that the series is going to show viewers the historical events surrounding the disappearance of the Roanoke colony in the 1500s. So even though the series hasn't shown viewers any flashbacks to the 16th century yet, this season should have multiple time periods. And offering glimpses of the present and the past is something that has been done in many seasons of American Horror Story before.

Jumping to and from different time periods is nothing new for the AHS franchise and Variety reported that in January, long before Season 6 premiered, FX CEO John Landgraf spoke about the new season's time period at the Television Critics Association press tour. "It's set in the present although with echoes of the past," Landgraf said. "It's set in two time periods . . . but principally in the present." So just like Season 1's Murder House and Season 5's Hotel dealt primarily with a story set in modern times, Season 6 will probably highlight moments from the past that haunt the present. Gosh, it's like Shelby and Matt have never even seen an episode of American Horror Story, otherwise they would have known not to move into a creepy house.

With only one episode of Season 6 airing so far, Landgraf's statement has appeared to be true. (Although, I must warn to not be too surprised if he's duping fans since Landgraf previously admitted the trailers for AHS Season 6 were intentionally misleading.) If I take Landgraf's comments to be the truth though, then Matt and Shelby's story is taking place in the present, with the dramatic reenactments presumably showing what happened a few years earlier, and the past element would go all the way to the 16th century to show what happened to the Roanoke colonists who went missing back in 1590.

As American Horror Story has shown viewers time and time again, ghosts can really negatively impact the land of the living and Kathy Bates in her colonial garb seems like she'll be terrorizing the modern characters. But if you take it even further, maybe the modern characters will actually be transported to the past, to the time of the Roanoke colony. Reddit user Jhudson1525 proposed this idea of time travel by noting that the ground shook during the Season 6 premiere on Sept. 14 and Paulson's character became lost in the woods. That shaking could have been Paulson's character traveling in time, especially since clips from the latest preview show Shelby seeing a human sacrifice in the woods, led by the old school-looking Bates.

The lighting on Paulson's Shelby when she calls out for Matt while watching the human sacrifice makes her look otherworldly and leads me to think that she might not be specifically time traveling, but more glimpsing into the past. It could be like she's seeing an echo of the past (as Landgraf had referenced), although I am totally willing to admit it could not be a magical aura and just be the blaze of the fire on her face. Whether or not Paulson's Shelby goes back in time or sees back in time, Bates' character should be making her way to the present since Angela Bassett's character Lee discovers a colonial bonnet in the home in the new trailer . . . unless that ground shaking transported the entire home into the past, but I don't think my poor mind can handle that theory right now.

While the laws of American Horror Story have proven that ghosts from different generations can stick around, I do like the idea of the modern characters actually being transported to the past. It would be an exciting take on the mythology of American Horror Story, but however Season 6 handles the mix of the modern people with the New World colonists, be prepared for multiple time periods to be shown and for your mind to be blown.