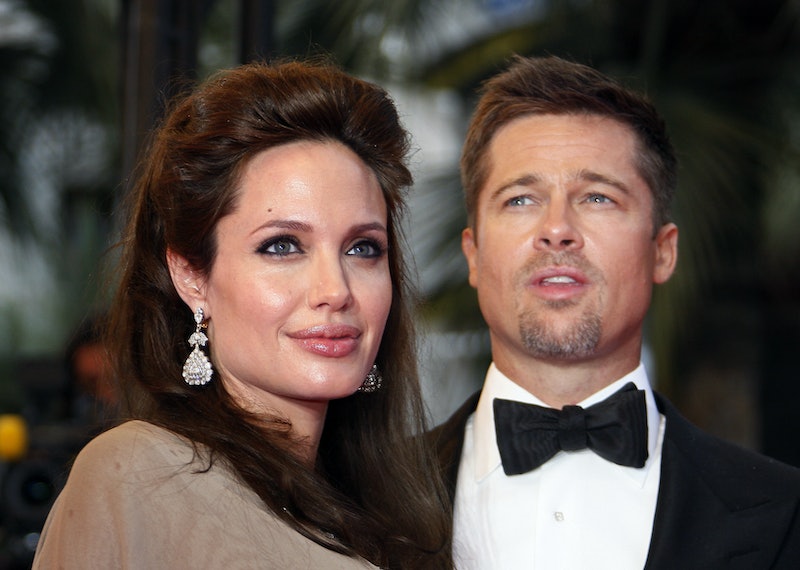 Ever since news of Angelina Jolie and Brad Pitt's divorce broke, updates have continued to come out and now there are some serious allegations against Pitt. On Thursday, TMZ reported that Pitt is being investigated by the FBI for allegations of child abuse. Bustle has reached out to the FBI and to a rep for Pitt for comment, but has not yet received a response. While Pitt hasn't yet spoken out himself, a source claiming to be close to the actor denied the abuse claims to The Independent. And while it's wrong to take the allegations against Pitt as fact, it's also damaging to blame Jolie or assume that she's lying. Seriously, that's the worst response to have amidst this uncertainty.

Update: The FBI released the following statement to Bustle: “In response to your inquiry regarding allegations within the special aircraft jurisdiction of the United States; specifically, an aircraft carrying Mr. Brad Pitt and his children, the FBI is continuing to gather facts and will evaluate whether an investigation at the federal level will be pursued.”

Earlier: It's worth noting that it was reportedly not Jolie who contacted the authorities. According to TMZ, an anonymous witness contacted L.A. County Department of Children and Family Services after Pitt allegedly was "wasted" and allegedly verbally abusive towards and physical with his children on a flight. Because the incident occurred while aboard a private jet from France to the U.S., TMZ reports that the case was passed over to the FBI. TMZ sources speculate that this may be what led to Jolie filing for divorce. (Bustle has reached out to a rep for Jolie regarding this claim, but has not yet heard back.)

By blaming Jolie or instantly assuming the story is fabricated, it puts Pitt on a pedestal and, in turn, takes away agency from the alleged victims — which in this case would be the couple's kids. This is similar to what happened when Amber Heard filed for a restraining order from ex Johnny Depp. People called the star a "gold digger" and didn't believe anything she said. They claimed she was only after his money. It was as if Depp's reputation was unbreakable and people would rather bash an alleged victim than tarnish their perspective of a championed actor. In the end, Heard and Depp settled matters, but she did not take his money. Instead, she proved people wrong and donated the funds to two charities. While no one has gone as far as to call Jolie a "gold digger," the situations are similar because instead of taking the allegations seriously, it's easy for some fans to dismiss them because the accused is a popular famous figure.

It's a dangerous trend to automatically fault the women and keep the male celebrities on a pedestal. Why is it easier to think they're lying than hear out the other side? Of course, such accusations are serious and could damage someone's reputation, and everyone is "innocent until proven guilty." But it does not mean that just because a man is a famous actor, he is incapable of doing anything wrong. When it comes to Pitt and Depp, these are completely separate alleged crimes, but they should not be automatically dismissed, simply because the men are some of Hollywood's elite.

Instead of jumping to conclusions, it's best to wait for the facts. And please, leave Jolie out of it. It's not her fault if Pitt is being investigated. Let's let the authorities do their job, instead of pretending to play detective ourselves.