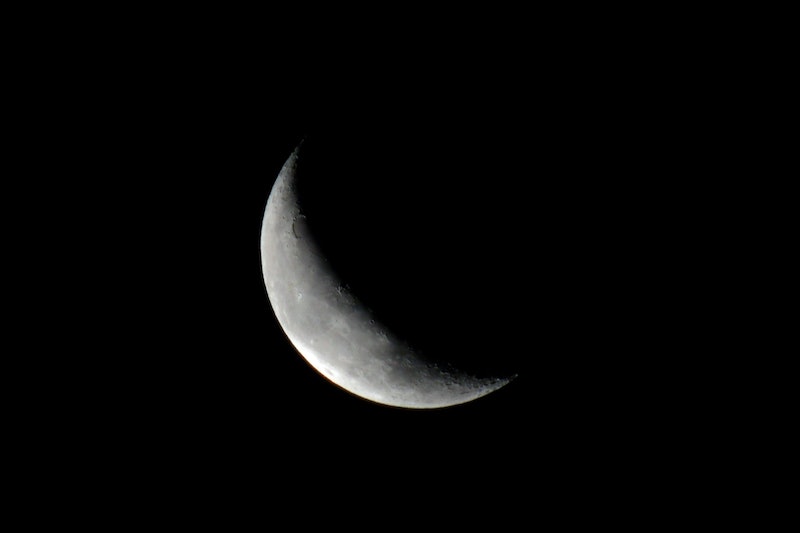 So you've probably heard all about this mysterious Black Moon that's supposed to "appear" on Sept. 30. You may, however, also have heard that you might not be able to actually see it. And if you've been wondering why you can't see the black moon, I can't blame you; personally, there have been many times when everyone scrambled to admire the latest lunar eclipse or meteor shower, but then I'd go outside and see nothing. (The only exception was when I got to see the Blood Moon last year, and that was pretty literally out-of-this-world awesome, I must admit.) True to its name, the Black Moon is something else entirely — and there's actually very good reason why literally no one will be able to see it. Ever.

The Black Moon, besides sounding like the name of a dark wave industrial rock band that could give Evanescence a run for their money, is basically a new moon, or the moon in its first phase. Think back to when you first learned about the four moon phases in elementary school. The moon doesn't actually generate any light of its own; what we call "moonlight" is actually the sunlight reflecting off of the moon's surface. As the moon orbits the Earth, the amount of surface area visible to us changes, resulting in the moon appearing to wax and wane. Eventually, all moons go dark — that's the phase known as the new moon. But wait, there's more: Not all new moons become Black Moons — it's only called a Black Moon if it's the second new moon to occur within just one calendar month.

Here's the thing with both the Black Moon specifically and new moons in general: Unlike twinkling meteor showers and other astronomical events, the reason why you can't see it doesn't have anything to do with, for instance, being located in a brightly lit area, or not being positioned in the area of the globe that has a clear view of it. The Black Moon, believe it or not, is not actually meant to be visible. The reason for this is that when there's a new moon — and, by extension, a Black Moon — the side of the moon that faces our lovely planet Earth is totally dark and buried in shadow. This is because the moon is positioned between the sun and the Earth; in this position, the face of the moon that's able to reflect that light just sends it right back toward the sun. Take a look at the image on the left hand side of this diagram:

So, more likely than not, you'll go outside and realize you won't be able to find the moon. Kinda spooky, huh? If you ask me, fall seems to be the perfect time for an event like this (ya know, what with Halloween right around the corner). But moon-lovers, fret not: The moon will eventually start to reappear in the shape of a fingernail, a sliver. The more it waxes, the more visible it will become. Science is cool.

More like this
13 Summer Solstice Quotes To Celebrate The Longest Day Of The Year
By Sadie Trombetta
The Summer Solstice Spiritual Meaning, Explained
By Jessica Booth and Brittany Beringer
The 7 Best Waterproof Sprays For Shoes
By Marshall Bright
How To Fight For Reproductive Rights, Based On How Much Time You Have
By Courtney Young
Get Even More From Bustle — Sign Up For The Newsletter