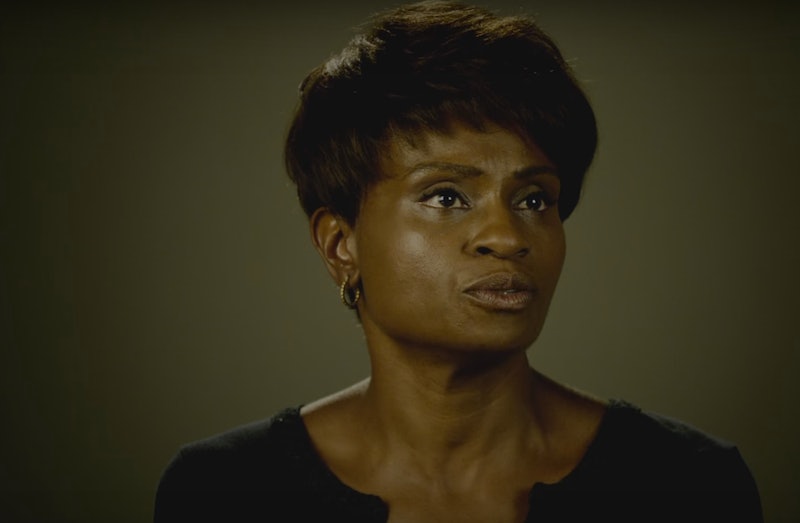 If you still haven't gotten used to the show-within-a-show format that American Horror Story is doing for Season 6, you aren't alone. Something seems super sketchy, but My Roanoke Nightmare finally gave some clue into what's going on when Lee spoke to the TV producer on American Horror Story during "Chapter 3." While I started the season being suspicious about the "real" people doing the on-camera interviews, Adina Porter's passion and outrage as Lee gave some credence that the actual people might be able to be believed. That means it may be time to turn my skeptical eye to those reenactment actors now, but either way, something is definitely fishy about the entire premise of American Horror Story: Roanoke, and I intend to get to the bottom of it.

So far only three characters have two actors portraying them: Porter and Angela Bassett as Lee, Lily Rabe and Sarah Paulson as Shelby, and André Holland and Cuba Gooding Jr. as Matt. In "Chapter 1," there was a stark contrast of how Rabe was conveying her emotions as the real Shelby (she was more cool, calm, and collected) and Paulson's interpretation of the events as the reenactment actor Shelby (she more rattled with more emotional depth). This led to fans thinking Paulson's Shelby was the real person and that Rabe's Shelby was the actor, but "Chapter 3" put a little dent in that theory.

When the TV producer of My Roanoke Nightmare (presumably Cheyenne Jackson) pushed Porter's Lee to reveal that she had another daughter before Flora, she was shaken up and ordered that they turn off the cameras. Even as Lee was still recovering from her secret past being unveiled for a TV show, the cameras were back on her and rolling. While I am concerned that any version of Lee isn't a very reliable narrator because of her previous drug addiction, her breaking her sobriety, and the fact that this is American Horror Story, the real Lee's emotions have been the most raw of any of the talking head interviewees. Does this mean that Lee is the only genuine real person? Is she suffering a manic break from all the trauma she had experienced in her life and Roanoke is really the story of her being at her losing her mind? Or am I totally just being tricked by Porter's performance and her (sort of) breaking the fourth wall?

It's easy to forget that everyone in the reenactment scenes should technically be an actor — and I think that's intentional to help you not only become emotionally invested in the story, but to further blur the lines of what's real and what's fake. Yet, while there are police officers, ghosts, a manic Denis O'Hare, a psychic, mountain people neighbors, and the three main characters in the reenactment scenes, only Shelby, Matt, and Lee are the only ones being interviewed. That indicates something is not on the up-and-up — whether that means the "real" people are tricking viewers or vice versa.

Since the curtain was dropped a tiny bit during the Sept. 28 episode, here's hoping that American Horror Story will continue to reveal what the deal is with the documentary format. I am predicting that the series will show Jackson and his fellow TV show creators (Billie Dean Howard perhaps?) in a behind-the-scenes look at the making of My Roanoke Nightmare, but even if that does happen, while Season 6's theme is Roanoke, I prefer to think of it as, "Trust no one."