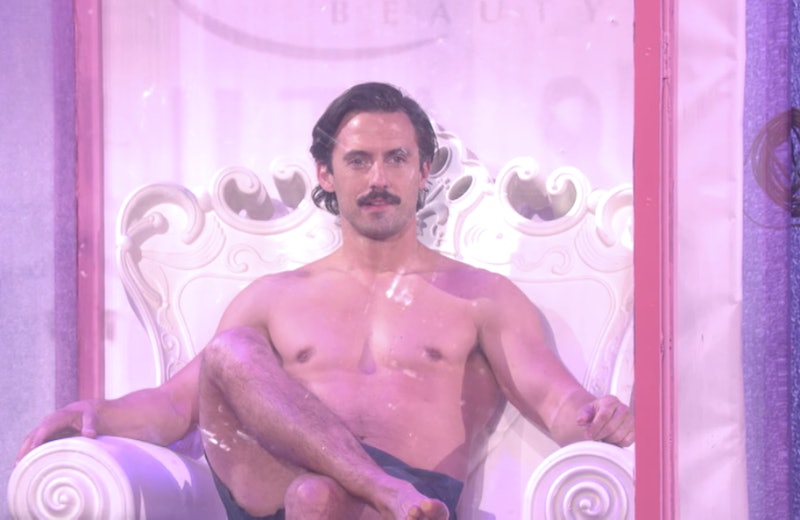 Just in case you were thinking that maybe, somehow miraculously, Jess Mariano had stayed the same puny and brooding boy that he was for almost all seven season of the Gilmore Girls, I am here to officially confirm that he has, in fact, grown up. The face behind the bad boy, Milo Ventimiglia, went topless for charity on The Ellen DeGeneres Show, and it was just another wonderful and welcome reminder that our favorite teenage crush has definitely become an admirable young man.

Ventimiglia made all of our bookish dreams come true when he presented Rory Gilmore with a copy of Howl by Allen Ginsberg, marked up with marginal notes, on an episode of the Gilmore Girls. But it turns out that he still has the power to set all of our hearts a'flutter, even though we’re grown up and so much less susceptible to that kind of nonsense... right?

Um, wrong. Because when Ventimiglia appeared on The Ellen DeGeneres Show and stripped down for charity, I just about lost my mind. Thankfully for fans of the actor — and for fans of hot men in general — this isn’t the first time lately that he’s shown off more than any of us could have ever hoped to see. In the premiere episode of This Is Us, Ventimiglia showed off his top and bottom half, making former Gilmore Girls all over the country incredibly jealous of the fictional Rory Gilmore. Again.

This time, however, the nudity was for a good cause. Partnering with ULTA Beauty to raise money and awareness for breast cancer research, Ventimiglia willingly stepped into the splash tank and let guest host Miley Cyrus throw balls at a target until he was soaking wet. And thank god that girl can aim, because I can’t imagine what would have happened with that audience if she hadn’t hit the mark. (For the record, if I had been there and she had missed, I would have stormed the stage and hit that target myself.)

It's one of those TV moments that you have to see to believe. And then see again. And again. And again. And — where was I? Oh, right. Jess Mariano may have been your bad boy teen crush, but Milo Ventimiglia is your philanthropic adult love. Gilmore Girls really is the gift that keeps on giving, you guys.

More like this
Netflix Reveals First Look At Wednesday In The 'Addams Family' Spinoff Series
By Bustle Editors
The New Grey's Anatomy Interns Have Fans Feeling So Nostalgic For Season 1
By Brad Witter
The Best 'Grey's Anatomy' Intern Moments, From MAGIC to Glasses
By Grace Wehniainen
24 Years Ago, 'Friends' Dropped Its Most Underrated Ross & Rachel Episode
By Grace Wehniainen
Get Even More From Bustle — Sign Up For The Newsletter