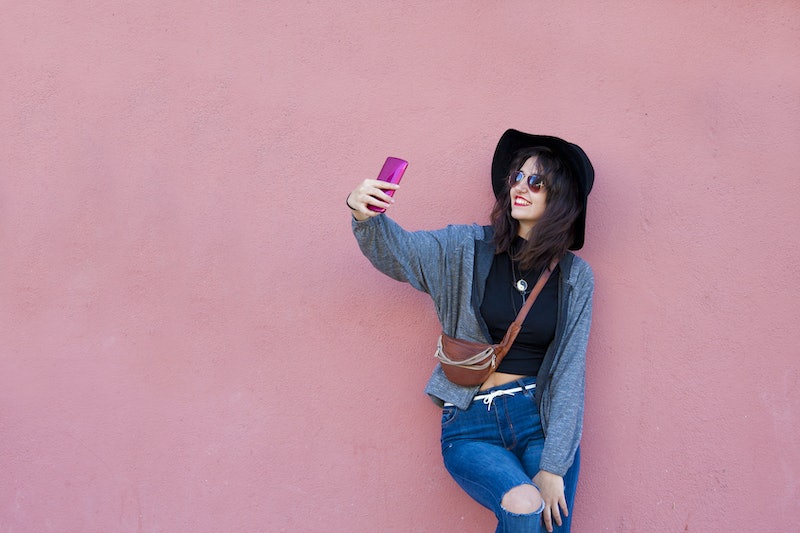 In case you forgot to mark it on your calendar, World Smile Day is Oct. 7! Harvey Ball, an artist from Worcester, Massachusetts, and the man behind that iconic yellow smiley face that was created in 1963, decided that the world needed more good will and smiles — which was his original intent with his smiley face. But as years went by, he feared that his intention was being lost, so in 1999, he declared that every first Friday of October would be World Smile Day forever and ever. And, I think we can all agree, if there was ever a year that needed a few extra smiles, this one just might be it. According to science, smiling actually makes us feel better. I think we might need some of that stat.

Smiling can also win over a potential date. “A smile says that you are a positive, open person,” relationship coach Melinda Carver tells Bustle. “It's a signal to others that you are friendly."

Because smiling is so important when it comes to finding ~the one~, dating app Coffee Meets Bagel, in honor of World Smile Day, analyzed the profile photos of roughly 300 of their members to see which types of smiles garnered the most “likes.” What they found was that not only does smiling in your profile photo make a huge difference, but how you smile also plays in your favor (or against it), too. Here are six findings from Coffee Meets Bagel “smile data.”

1. Women Who Tilt Their Head When They Smile Are Most Desirable

Although I feel like I look terribly confused and befuddled by the world when I tilt my head and smile, according to the findings, women who smile while tilting their head to the side are really raking in the “likes.” Of those who are “liked” more than 50 percent of the time, 71 percent of them are smiling with their heads tilted.

2. Men Who Keep Their Heads Straight Will Have Better Luck

While tilted heads are all the rage (a combo of words I never thought I’d write) for women, when men try this move, it’s far less appealing. In fact, of the men who get the most "likes" on Coffee Meets Bagel, only 26 percent of them are tilting their heads.

3. Your Fellow Singles Want To Know You Have Teeth

So… maybe I don’t know for sure that singles want to make sure their potential date is rocking a mouth of pearly whites, but according to the data, big toothy smiles are winners for both men and women. Of the men who are "liked" more than 50 percent of the time, 79 percent are showing their teeth when they smile, while the percentage for women is 58. Can you imagine if a woman smiled and tilted her head?! Minds would be blown everywhere!

4. Women Can Pull Off The Closed Mouth Grin Better Than Men

To be honest, the closed mouth grin is a tricky one. It can make someone look anywhere from annoyed to constipated to a thousand other feelings in between. However, despite the closed grin being so hard to read, of the single women who get the most "likes" on Coffee Meets Bagel, 24 percent of them have a closed mouth grin in their profile photo, whereas only 5 percent of the most "liked" men are getting any sort of attention with this look. (See? Constipated.)

5. Seriousness Is Actually An OK Look

Similar to the closed mouth grin, no smile at all forces people to come up with their own interpretation of the type of person you are, which, according to these stats, seems to be a cool with some singles. Of the most popular single women and men on the app, 17 percent of women and 16 percent of men find themselves being "liked" despite not smiling at all in their profile photo. It must have something to do with the mystery of it all.

6. No One Wants To See You Laughing

First of all, I just want to say I look best when I’m mid-laugh, but since this isn’t about me, I’ll digress. According to “smile data,” of the single women who are "liked" more than 50 percent of the time, only 2 percent of them are laughing in their profile photo. As for the guys? Well, they got a whopping 0 percent. So as much as we all say we want to date someone who makes us laugh, we don’t want to see them laughing in their dating profile photo? I’m confused... which means I'm tilting my head and smiling while I write this.

More like this
50 Valentine’s Day Instagram Captions To Post If You’re Single
By Jessica Booth, Lexi Inks and Carolyn Steber
12 Active Date Ideas That'll Get You & Your Boo Outside
By Lexi Inks
18 Hinge Prompt Answers To Try If You’re Looking For Something Casual
By Lexi Inks
Here’s What TikTok's "Mascara” Trend Is *Really* About
By El Hunt
Get Even More From Bustle — Sign Up For The Newsletter
From hair trends to relationship advice, our daily newsletter has everything you need to sound like a person who’s on TikTok, even if you aren’t.