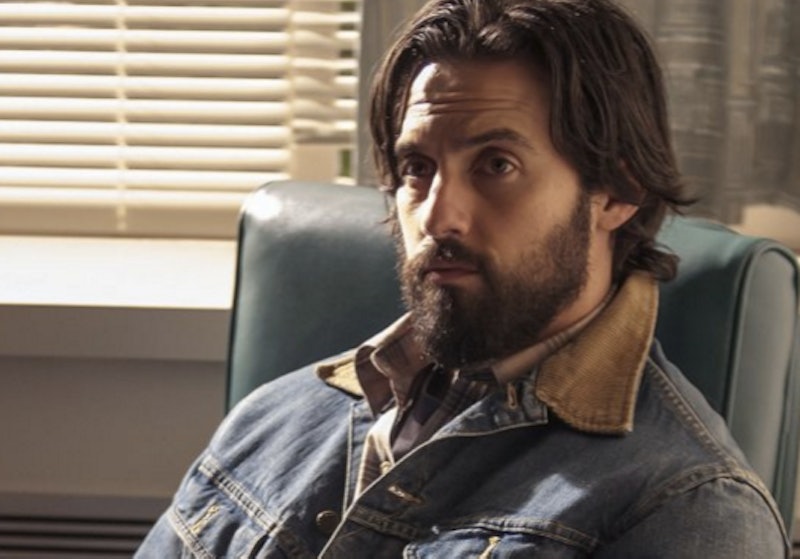 There are many reasons to watch the new NBC show This Is Us but, arguably, the most important one is that Milo Ventimiglia is in it. If you're a fan of Gilmore Girls, and are currently waiting with bated breath to find out who Rory will end up with, then you should watch This Is Us immediately — if only to spend time with Ventimiglia's lovely face. While I would love to see Rory end up with Jess, and I'm sure you would too, I'm just glad that the actor is back on our screens. Milo Ventimiglia is nothing like Jess in This Is Us , but that's not a bad thing. The difference between the two characters allows Ventimiglia to show his incredibly range as an entertainer.

His character Jack is dad to The Big Three, and husband to Mandy Moore's Rebecca. Despite only being two episodes into the first season, Jack has already dealt with a plethora of emotions, from full-on crying to marital strife to fatherly pride to alcohol-induced regret. It's awesome to see the Gilmore Girls actor take on a role that spans decades, and requires him to explore facets of a character that is already so different from book-loving Jess Mariano.

One of the qualities that made Jess so endlessly lovable was the fact that he was always aloof and unassuming. His brand of cool revolved around the fact that he seemed laid back, while clearly being incredibly smart and quietly intense. The fact that he wrote notes in the margins of books for Rory was basically the pinnacle of romance, and total #relationshipgoals. To some, Ventimiglia's character in This Is Us will come as a bit of a shock, mainly because Jess's sense of cool is largely gone, along with his artistic nature and burgeoning future. While Jack in This Is Us has an incredible family that he's proud of, it feels as though he's innately lost and, as such, at risk of losing everything he loves.

It's the differences between Jess in Gilmore Girls and Jack in This Is Us that prove what a talent Ventimiglia is. Gone is the hopefulness that Jess seemed to have, the ability to throw himself into new ventures and reinvent himself with ease. Instead, Jack appears to have the life he planned for, with a wife and three children, but he's still unhappy. He drinks excessively every night after work, and spends less and less time with his family.

Ventimiglia has clearly thrown himself into his new role completely, as his new disheveled style and labored facial expressions represent a character far removed from Jess Mariano and Stars Hollow. Jack is on a dark path, and it's heartbreaking to follow the Gilmore Girls actor on this journey.

This Is Us is definitely worth watching, if only to see Ventimiglia grow as an actor and explore the darker aspects of his personality. The show promises an emotional first season, and it'll be exciting to see what the former-Jess Mariano does next.