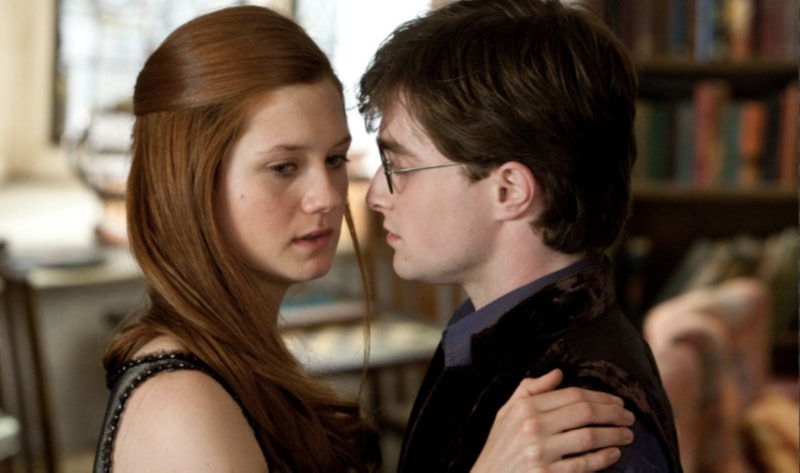 If you're in the mood for a righteous bummer, then gather round, fellow Potterheads, and examine a fan theory that is actually far from a new one: the idea that Ginny Weasley gave Harry Potter a love potion, tricking him into falling in love with her during Harry Potter and the Half-Blood Prince. The idea can be traced back to a Reddit thread back in 2013, inviting users to share the craziest fan theories they'd heard in the fandom. Other users, including colmshan1990, expounded on the theory, saying it made sense within a narrative suddenly hyper-focused on love potions, and a narrative where Harry seemed to fall in love with Ginny so suddenly.

I've written on Bustle before about my distaste for the thematic involvement of love potions in Harry Potter , so my opinion on this is pretty obvious. But let's entertain this theory for just a moment and try to consider when and how exactly Ginny would have managed this (entirely out of character) feat. By her fifth year, she was distinguished as a student with potential, slaying on the Gryffindor Quidditch team, attending Slughorn's parties, and taking care of her adorable pygmy puff, Arnold — not to mention dealing with the impending threat of Voldemort and his followers (oh, right). When exactly would she have the time to concoct a long-lasting, powerful love potion to trick Harry into falling for her? And more to the point, how do we explain the fact that he was still in love with her even in all the time they were apart in the seventh book?

Logistics and basic logic aside, though, here are all the reasons we can safely debunk the "Ginny gave Harry a love potion theory":

If Anything, Rowling Makes It Clear That Harry Used A Potion To Break Up Ginny's Relationship

In some much-needed comedic relief, it appeared very much as though Ginny and Dean's already crumbling relationship was given its final blow when Ginny snapped at him for helping her through the portrait out of the Gryffindor Common Room, unaware that it was actually Harry under the Invisibility Cloak who nudged her. This wouldn't be all that remarkable if it weren't for the fact that Harry was under the influence of Felix Felicis, a good luck potion, at the time, heavily implying that his not-so-unconscious desire for Ginny to be out of a relationship with Dean was one of the factors the potion was addressing for him. So really ... who's messing with whom here?

The proponents of this theory seem to be pointing to the fact that Harry seemed to like Ginny ~out of nowhere~, but really, Rowling dropped all kinds of adorable hints. He smells Ginny's shampoo in the Amortentia, he's upset about her being with Dean without knowing why, he is in constant awe of her on the Quidditch pitch and spends time talking to her at length — if anything, it seems like it "came out of nowhere" because Rowling was making a point of how adorably clueless Harry was to his own feelings until he was making out with Ginny in the common room, which is the most aggressively high school scene in all of these books combined.

Ginny Would Never, Ever, EVER Give ANYONE A Love Potion

Let's talk about Ginevra Weasley, y'all. Let's talk about how this pint-sized little nugget yapped at none other than Lucius Malfoy at the age of 11 because he was badmouthing her fave. Let's talk about how she was manipulated and nearly killed in her first year at Hogwarts after being a madman's puppet, and later had explicit conversations with Harry about how she understood better than anyone what it was like to lose her autonomy — the very thing a love potion compromises. Let's talk about how sweet, gentle, and simultaneously fierce AF Ginny spent every day after that happened to her sticking up for everyone around her, standing up for herself, and blossoming into a beautiful young woman with zero chill. Ginny Weasley wouldn't just be completely and utterly morally opposed to the idea of giving someone a love potion; she is far too proud to accept any kind of love that isn't the real freaking deal. Case in point? She gave up on Harry. She loved him for years, and when it seemed that he would never reciprocate, she dropped it, content to be his friend. Why? Because Ginny. Is a person. Who KNOWS. HER WORTH. And a person who knows their worth is not someone who would ever feel the need to go shoving love potions down people's throats.

Woof. Wow. Anybody have a Gatorade? I didn't mean to get so salty and now I need the extra electrolytes.

In conclusion, Ginny Weasley is queen, and love potions are the worst. May this theory officially draw its last breath, and all hail Book Ginny, forever may she reign.

More like this
Alan Rickman's Diary Reveals Why He Considered Leaving 'Harry Potter'
By Darshita Goyal
This Episode 6 Moment Foreshadows Viserys' Fate On 'House Of The Dragon'
By Grace Wehniainen
Nicola Coughlan Shared A Lady Whistledown Excerpt From ‘Bridgerton’ Season 3
By Grace Wehniainen, Alyssa Lapid and Sam Ramsden
Read The First Pages Of Emma Rosenblum’s Highly Anticipated Debut, 'Bad Summer People'
By Samantha Leach
Get Even More From Bustle — Sign Up For The Newsletter