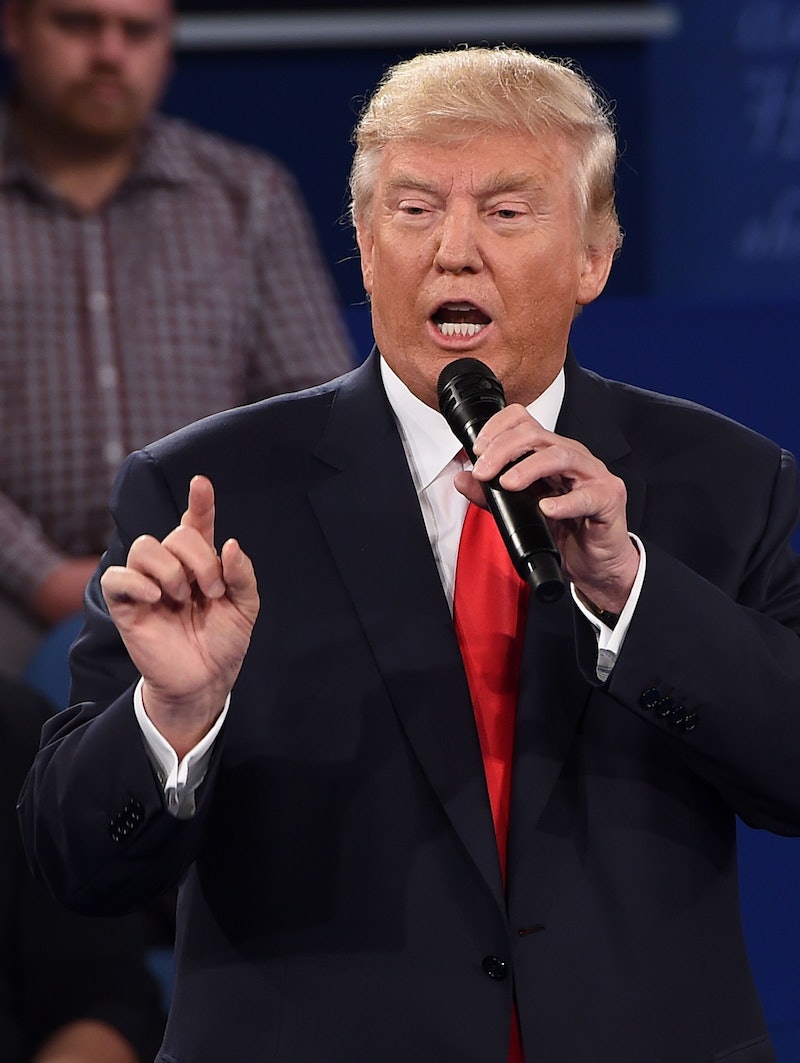 It's possible you were shocked when Donald Trump, alleged patriot and person who's definitely not a loser, put his famous eloquence on display Sunday night during the second presidential debate to ask this jarring yet oddly thought-provoking question: "How stupid is our country?" One might think that a man who has invested so much time and money into becoming the next president of the United States would think twice before climbing up on a national stage and, you know, insulting the very voters he's tried so hard to win over. But, if we've learned anything while watching Trump's campaign veer wildly off course and into the land of "this can't possibly be happening," it's to expect the unexpected. And as ridiculous as Trump's question may sound, he's not the first person to wonder at the merit, intellect, and potential of our country. In fact, our nation's presidents have been asked to answer the very same question for centuries — how great is America, really? Unlike Trump, however, they've arrived at slightly more sparkling conclusions.

For what it's worth, Trump wasn't actually referring to the character of all American people when he let slip this gem of a quote — he was talking about U.S. strategy in Syria. But it isn't exactly heartening to hear a man so bent on taking over the Oval Office refer to America as being nothing but a nation full of idiots.

So just how stupid is our country? Thankfully for Trump, there is a whole legacy of galvanizing, unifying, and inspiring American leaders who have thought carefully about this nation's awesomeness pretty much since America first became a thing, and they would like to chime in. To help answer your question, Mr. Trump, here's what 12 former American presidents have to say about the matter.

"There is nothing wrong with America that faith, love of freedom, intelligence, and energy of her citizens cannot cure." — Dwight D. Eisenhower

"The overwhelming majority of Americans are possessed of two great qualities: a sense of humor and a sense of proportion." — Franklin D. Roosevelt

"I am a firm believer in the people. If given the truth, they can be depended upon to meet any national crisis. The great point is to bring them the real facts." — Abraham Lincoln

"There is nothing wrong with America that cannot be cured with what is right in America." — Bill Clinton

"No other people have a government more worthy of their respect and love or a land so magnificent in extent, so pleasant to look upon, and so full of generous suggestion to enterprise and labor." — Benjamin Harrison

"America is the student who defies the odds to become the first in a family to go to college; the citizen who defies the cynics and goes out there and votes; the young person who comes out of the shadows to demand the right to dream. That's what America is about." — Barack Obama

"America, with the same voice which spoke herself into existence as a nation, proclaimed to mankind the inextinguishable rights of human nature, and the only lawful foundations of government." — John Quincy Adams

"If anyone tells you that America's best days are behind her, they're looking the wrong way." — George W. Bush

"Unlike any other nation, here the people rule, and their will is the supreme law. It is sometimes sneeringly said by those who do not like free government, that here we count heads. True, heads are counted, but brains also ..." — William McKinley

"America was not built on fear. America was built on courage, on imagination and an unbeatable determination to do the job at hand." — Harry S. Truman

"The American, by nature, is optimistic. He is experimental, an inventor and a builder who builds best when called upon to build greatly." — John F. Kennedy