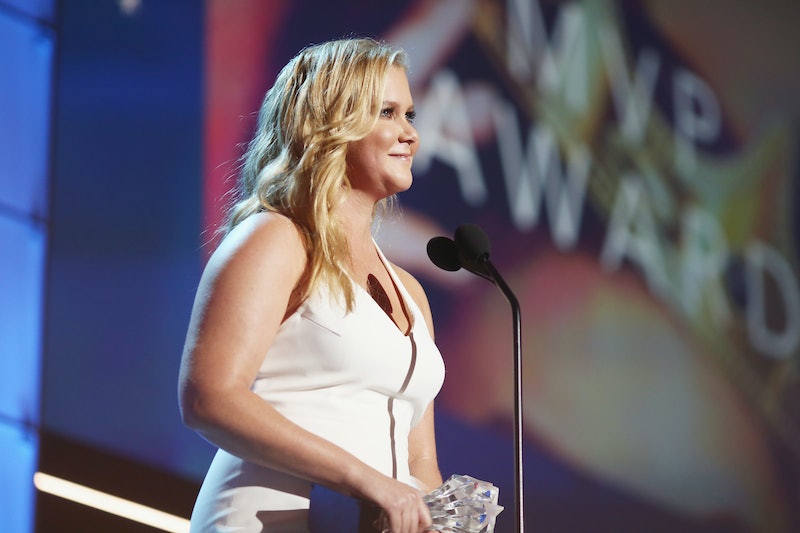 Amy Schumer has a lot of famous friends, but that didn't make it any less exciting when Schumer showed up on Dancing with the Stars to give some insight about her friend and contestant Amber Rose. Dancing with the Stars likes to tap into their stars' celeb friends for the video packages before performances and Schumer did just that for the Oct. 10 episode. Rose was performing a dance with her partner Maksim Chmerkovskiy that was dedicated to her Most Memorable Year of 2013 for when her son was born. As Rose wanted her samba to be a "celebration of women," the feminist queen Schumer was the perfect person to speak about Rose.

Although Schumer's appearance was brief and she unfortunately wasn't at the live show to cheer her friend on, she did offer a personal perspective on Rose's personality in the pre-taped segment. "Amber's a girl's girl and I think people maybe would be surprised to find that out," Schumer said in her interview. "But she doesn't let ego drive her, she really is who she claims to be."

Rose's Most Memorable Year dance was for her super adorable son Sebastian, but it also focused on girl power since Rose said, "I want my son to look at me like superwoman." That femininity that Schumer mentioned was on display not only in Rose's ridiculously awesome bedazzled leotard, but also when she danced with a crew of other fierce women in the style of Beyoncé, judge Julianne Hough noted. Her dance truly was a celebration of women and moms and Rose's friend Schumer (the comedy patron saint of women) appearing on the show to support Rose was just the cherry on top of the pro-woman sundae. Or should I say the cherry on top of the "Milk Milk Lemonade"?