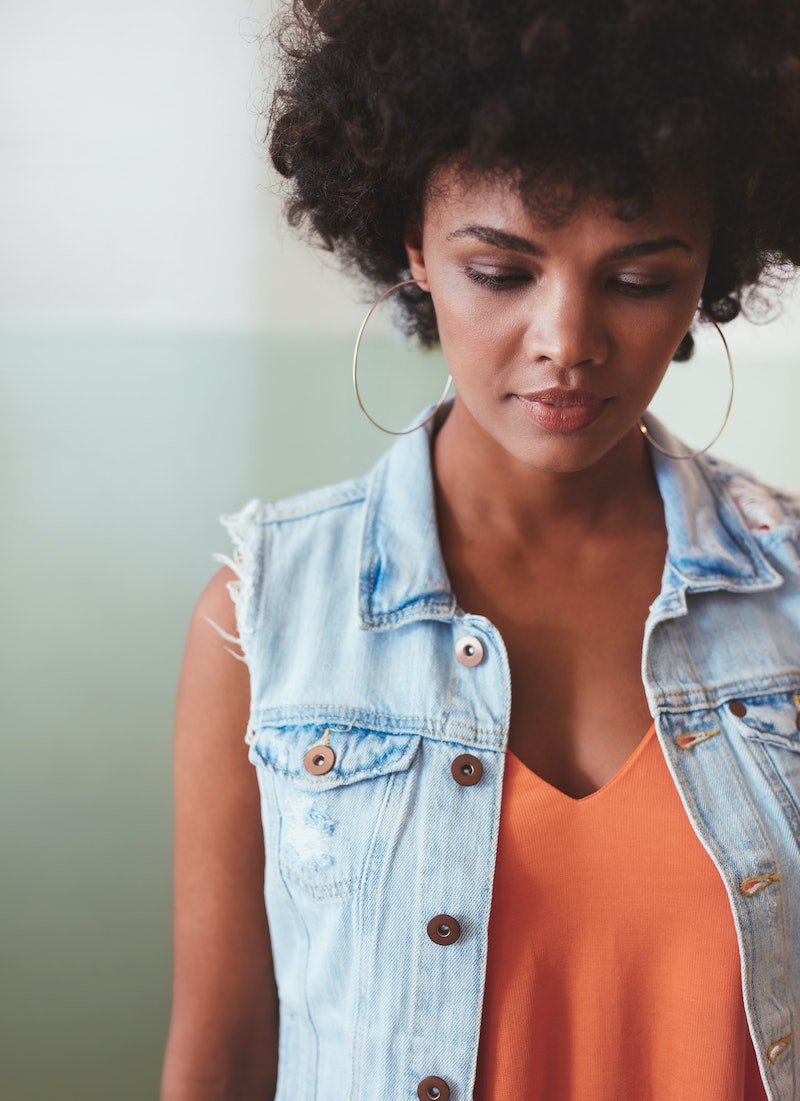 Not all that long ago (in the grand scheme of the universe), men were trading their daughters' hands in marriage for a couple of goats. We've come a long way since then in terms of gender equality, but there's still a lot of pressure on women to get married. Many little girls fantasize about their eventual wedding days, and a lot of the reason for that is because we're taught to look forward to marriage as the apex of our lives. There's nothing wrong with a girl wanting a fulfilling, lifelong relationship, but more often than not, the fantasy is really about some big wedding, not a union of two equal partners. And let's be real: we don't teach young boys that their wedding day is something to daydream about.

"Unfortunately, both the direct and implicit messages women receive from an early age is that our self-worth is attached to our attractiveness and our dating life," says Barbara DiGangi, a Licensed Master Social Worker and gender expert. "Women tend to be perceived by their peers in how they are valued by men. We see women all the time referred to as 'so-and-so's wife'. We are held to expectations that one of the greatest things to be celebrated in life is a wedding. These messages are harmful because they imply that we are defined by who we date and our marital status instead of our unique definition of who we are."

Sure, you might assume that an unmarried, older man is lonely, but it's not seen as weird for guys to "choose the bachelor lifestyle." There's a big difference in how we view unmarried women — we often think of them as spinsters who just couldn't find someone to settle down with. We often don't consider the reality that some women don't believe in marriage and others make an active choice not to get married for a separate (but no less valid) reason.

"The messages we receive result in the idea that there must be something wrong with single women (i.e. too [insert comment on physical appearance], too picky, "crazy" etc.) — fueling shame and eroding their self-worth," DiGangi says. "Many women feel the need to defend why they're single when it can very much be a choice or "I know what I want and I just haven't found it." Perhaps as a society we should be focusing on how men can treat women better instead of how women "should" or can alter themselves to attract men."

Here are 10 things people might (wrongly) assume about a woman, no matter her age, who's as-yet-unmarried — and it should go without saying, but these stereotypes seriously need to be put to rest.

1. They Secretly Want To Be Married

Marriage is a cool thing. You get the promise of forever, plus all that neat stuff about joining your finances and taxes and whatnot. But the fact of the matter is that marriage is not for everyone. Any person, regardless of gender, can decide that they simply don't see marriage in their future (like Samantha Jones of Sex and the City). It doesn't mean they can't have fulfilling long-term and/or monogamous relationships — it just means they don't particularly care for the idea of marriage, for whatever reason. The only important thing? That reason is none of your business.

Disclaimer: I really love cats. I'm also single. And I'm damn tired of the 'cat lady' trope (mostly because I don't even own a cat right now, which seriously pains me). An unmarried woman isn't obligated by law to have hordes of felines, and cats are not a sad symbol for loneliness. End of story.

News flash: thanks to modern science (and, ya know, adoption), you don't need a partner to have a baby — you can do it all by yourself. Just because a woman is unmarried doesn't mean she doesn't want to have children someday. It's also totally OK for a married woman to be childfree — there's no right or wrong choice, as long as you do what's right for you.

Being single doesn't mean you sit around crying and eating ice cream while you wait for a Love Actually-style proposal. "This [loneliness] stereotype fuels the idea that happiness is an outside job when it's really an inside job," DiGangi says. "Our happiness isn't contingent on whether or not we are dating someone. This is harmful, especially in an age of social media, because it can keep women in unhealthy relationships — striving to be perceived as happy and whole while sacrificing their self-worth and wellness."

Again, this stereotype is borne from the notion that marriage is the central focus of a woman's life, and that all things build up to that big moment. Obviously, that's simply not true for many women, and there's also research to prove that single women can find fulfillment in so many other areas besides their relationships: having a kickass career, working towards goals, spending time volunteering, or starting a side hustle. Don't assume a woman is unhappy and unfulfilled just because she happens to be single.

6. They're Too Focused On Their Career

Is there such a thing as being too dedicated to your work? Sure, being a workaholic may not be good for you, but not all single women are type-A, super serious business ladies. There are tons of reasons a woman may choose (notice I said choose) to remain unmarried — a fulfilling and demanding career is just one of those reasons. And being invested in your career doesn't mean you can't also have a satisfying relationship, because it's totally possible to balance both.

This stereotype is probably most often applied to older single women, thanks to the BS idea that women are less sexy (and therefore less desirable) the more they age. Fortunately, a healthy sex life doesn't end the moment you enter your 40s — in fact, studies have shown that sex actually gets better as you age. So even if you're single at 70, you can still have a hot and heavy sex life.

8. They're Totally Against Marriage

Not every unmarried woman has a vendetta against marriage as an institution. Like with anything, you can decide something isn't right for you, while respecting other people's ability to decide for themselves what they want to do.

Another shitty thing about being single? Worrying that people will think you're rude or stuck-up (or worse) when you reject someone. "More often than not, no matter how nicely a woman rejects a man, the response is crude — potentially contributing to having a reputation as a 'bitch' when all she is doing is exercising her right to live the way she wants to," DiGangi says. "This is harmful because it implies that if women exercise their voice or don't live the way society tells them to, they're undesirable."

This stereotype is really more about other people's insecurities than a woman's own shortcomings, TBH. Someone might be intimidated by an unmarried woman, because they assume she has her shit seriously together in other aspects of her life. "Women are encouraged to not be too successful, too accomplished or showcase their accomplishments if they want to attract men" DiGangi says. "This is harmful because it results in women unconsciously feeling they have to shrink themselves, their ambition or their image in order to be more desirable. A woman's ambition and accomplishments should be celebrated instead of seen as something that is a violation of a male's territory."

These things are just plain rude to assume about someone, no matter their age or gender. Let's cut it out.