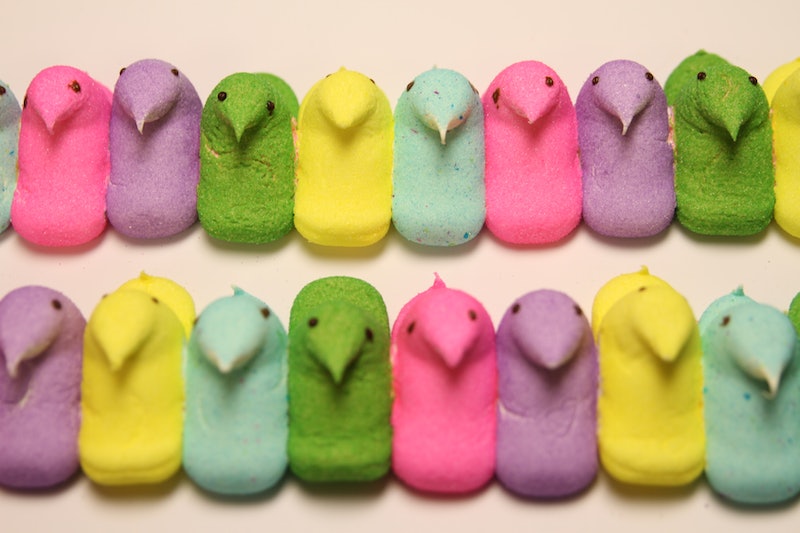 I thought we'd seen it all when Swedish fish-flavored Oreos came out earlier this year, but apparently not: There's a rumor floating around that Peeps-flavored Oreos will be hitting the cookie market in March 2017, just in time for Easter. I can hardly believe that we're already talking about spring holidays when Halloween hasn't even passed yet, but that's how holiday creep works, I guess. The flavor hasn't been confirmed, though; Bustle has reached out to Mondelez and Just Born for comment and will update this post if or when we hear back.

Update: According to an email received by Bustle, Mondelez as no comment at this time.

Earlier: The chatter began after food blogger Eric Huang, who runs the site Junk Food Guy and tweets under the same name, tweeted an image of what looks like limited edition Oreo packaging. In this case, the package is bright pink and yellow — what many of us think of as Easter colors — instead of the deep blue shade we've come to associate with Oreos.

Huang has been regularly reviewing and reporting on the latest junk food for at least five years; his Twitter account regularly features photos of the foods he's spotted in the wild, as well as those which he's actually tried. According to Huang, here's what Peeps-flavored Oreo packaging looks like:

Huang tells Bustle via Twitter that he has a source at a retailer HQ, which is how he learned about this potential new development (although again, it's worth noting that the flavor hasn't been confirmed by any official channels yet). If it does come to pass, though, the packaging seen here suggests that these Easter treats will be comprised of Golden Oreo cookies with pink frosting. Since Peeps are made out of marshmallows, I would guess that Peeps-flavored Oreos would be stuffed with marshmallow cream, which honestly sounds delicious to me. (Who else remembers eating peanut butter and marshmallow fluff sandwiches in elementary school? Please tell me I'm not alone on this.) Huang predicts this as well in another tweet:

I have to admit, the pink Peeps bird is pretty cute. Maybe Peeps Oreos will come in pastel blue and green, too? One can only hope!

As is the case whenever Oreo comes out with a new flavor, it seems there are a lot of mixed feelings. Some are a little less than thrilled:

While others are over the proverbial moon about them:

And some just appreciate them for the mystery that they are:

Oreos are no strangers to interesting flavor mashups; in the past, Oreo churros, Red Velvet Oreos, and so many other experiments have jazzed up "milk's favorite cookie."

I especially hope the rumor is true just so vloggers will bring the Oreo eating challenge back on YouTube. Yep, you guessed it: The Oreo eating challenge is all about trying out different flavors of Oreos and watching people's reactions on video. I've included one of my favorite Oreo eating videos below, so you can see what I'm talking about. I can't wait to see what YouTubers make of these Peeps-flavored Oreos, if they do end up hitting stores next year.

Is it too early for me to say out loud, welcome to the Oreo family?