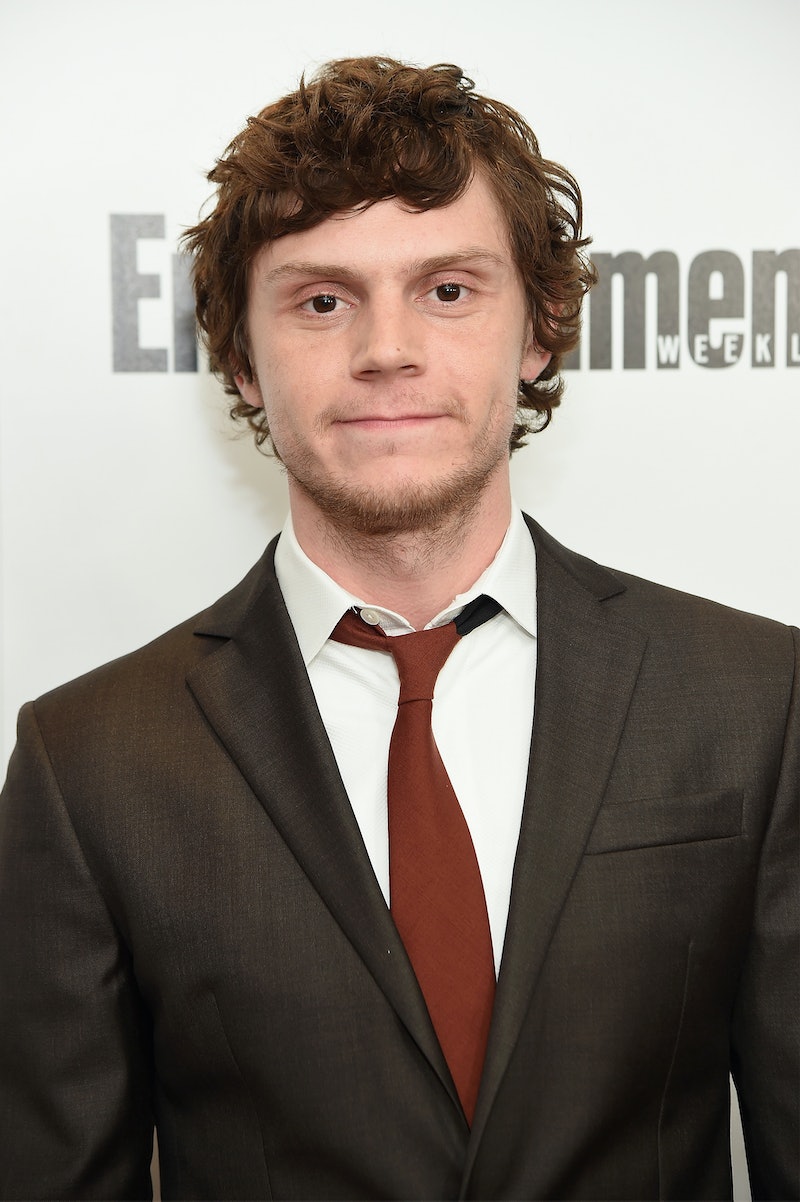 Is Evan Peters OK? Does he need our help? It's been four episodes and despite being listed among the main cast members, American Horror Story mainstay Evan Peters has yet to show his face in Season 6. Peters fans are living their own Roanoke Nightmare as they wait for his introduction to the season. The show is almost halfway through its first season, and supposedly has a massive twist coming in Episode 6 that will turn the whole season on its side. Is Evan Peters part of the big twist? Is the twist that he's already been on the show? Who is Evan Peters playing on AHS: Roanoke?

Evan's casting may seem simple right now — the show is pretty clearly a "real" story told by survivors of a horrific ordeal communicated through dramatic reenactments. Surely Peters will play a character in the re-enactment much like Sarah Paulson or Kathy Bates, right? But, who's to say he won't turn up in the "real" world and end up being interviewed like Lily Rabe or André Holland? Furthermore, it's entirely possible that Evan Peters could be a camera operator or even the director of My Roanoke Nightmare, the show within the show! With so many possibilities, here's a roundup of the most likely roles Evan Peters could fill when he makes his much-awaited return to AHS.

One of the most popular online theories states that Evan Peters is the terrifying Pig Man that has been terrorizing Matt and Shelby, meaning that Evan Peters has been on screen the whole season. Certain evidence points to similarity in shoulder shape, but until that Pig Head comes off there's no way to know for sure if it's truly Evan Peters. Here's hoping it comes off soon, because wearing that can not be comfortable.

It seemed that the show would stick to interviewing only three characters — Shelby, Matt, and Lee. However, Episode 4 revealed that the show is willing to reach out to others involved even if they're just an Uber driver who was involved in the events of the season for only a few moments. Evan Peters may be playing a character that manages to survive the ordeal but simply hasn't been interviewed yet.

Another popular theory states that Evan Peters could be the person interviewing the subjects of My Roanoke Nightmare . The series has briefly shown the people behind the camera during Episode 3, and perhaps the behind-the-scenes world will start to bleed into the reenactments, with the Interviewer involved in the action.

With a big twist on the horizon, there's a chance that Peters is playing a character who won't become important until the twist is revealed. One possible twist may be for the action to move from the show-within-the-show to the filming of the reenactment — with the real horror falling upon the actors who intended to fake their way through the terrors. Peters could be the director of My Roanoke Nightmare who gets more than he signed up for.

Ryan Murphy promised Entertainment Weekly that AHS: Roanoke would dive into the history of AHS: Freak Show character Dandy Mott and the rest of the Mott Empire that was first introduced in Season 4. It's entirely possible that Evan Peters could be playing an important figure that connects the Mott family to AHS: Roanoke.

Evan Peters could be playing Ryan Murphy, showrunner of American Horror Story, in American Horror Story. Hear me out. While AHS: Roanoke does deal with history and hauntings, it's also dealing with the television industry. While AHS: Roanoke has only shown the show-within-the-show so far, if that breaks and fans get to peek behind the curtain, they may find Evan Peters. But what would be more exciting than seeing the behind-the-scenes members of My Roanoke Nightmare succumbing to horror? The cast members of American Horror Story becoming victim to the terrors of Roanoke, of course. It's a long-shot, but Ryan Murphy deals almost exclusively with narrative long-shots.

Unfortunately, just like every other part of American Horror Story: Roanoke, there is nary an answer to be found about the season. All that we know is that Evan Peters will be in the show at some point. As who or for how long won't be revealed until he shows his face. Until then, fans will continue to keep a sharp eye out for any signs of Peters and hope that Ryan Murphy doesn't get any ideas to withhold him from fans any longer than necessary. Please, just give us Evan Peters. We miss him so, so much.

More like this
Who Could Die In The Stranger Things Season 4 Finale?
By Kadin Burnett
Hayden Panettiere Admits "Addiction" To Alcohol & Opioids Before Going Sober
By Jake Viswanath
The Star Of 'Ms. Marvel' Has A Legendary Letterboxd
By Gretchen Smail
Everything To Know About The 'Pretty Little Liars' Reboot On HBO Max
By Mary Kate McGrath, Jack Irvin and Radhika Menon
Get Even More From Bustle — Sign Up For The Newsletter