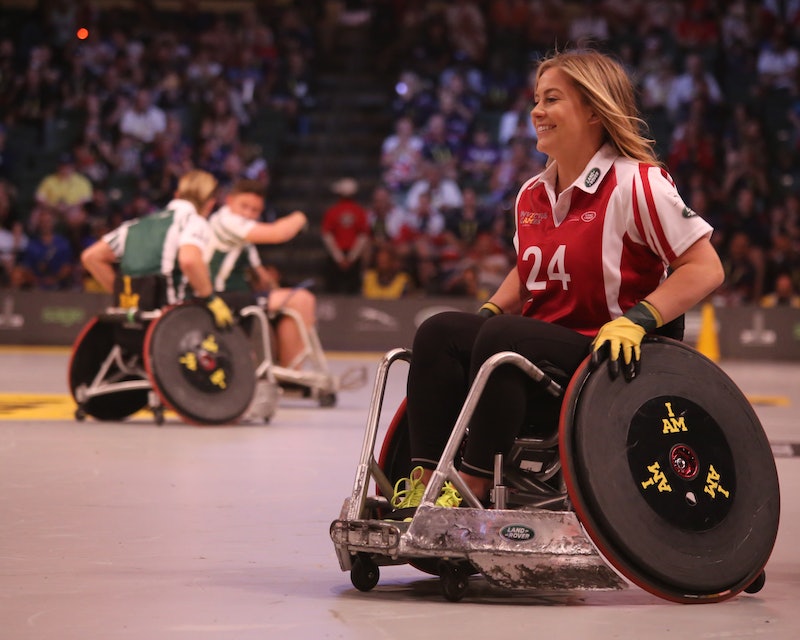 One of the biggest challenges for people with disabilities (PWD) is being judged for their disability — and there's a word for exactly that: It's called discrimination. People with both visible and invisible disabilities know what disability discrimination is like: It may be overt or indirect; it may be deliberate or unintentional; and discrimination isn't always verbal. It may take the form of inaccessibility, or silent bullying, or just plain ignorance. And these tweets show exactly what it's like to experience it.

I've been disabled pretty much from birth. Thanks to something called vocal cord paralysis — a condition which occurs when the nerve impulses to your larynx are disrupted and which can affect your ability to speak and breathe — I wear a tracheostomy tube that helps me breathe 24/7. Growing up, I used to think it was somehow my fault that people treated me poorly. When guys in middle school made fun of my looks or my voice, I thought these were characteristics that I needed to change. When a job interviewer started asking me totally unrelated questions about how the weather affects my health, I wondered if perhaps I did or said something to make him doubt my capabilities.

This is what disability discrimination does. We as PWD are taught to mold ourselves to fit society's expectations, and if society treats us badly, it's our own fault for being different. It took me a long time to unlearn those lessons, as well as to realize that people who discriminate against me don't do it because they've never been through hardships or because they're inherently evil. Frequently, it's simply due to lack of knowledge (and, sometimes, empathy). Even relatives or friends who are able-bodied can unknowingly discriminate against their loved ones who have disabilities, assuming they know better.

But the good news is that PWD are increasingly using their voices to speak up about what's OK and what's not. Thanks to the internet, social media has become a widely accessible forum for people with disabilities to talk about their everyday lives, swap stories of discrimination, and virtually hold hands in solidarity with one another. Here are just a few tweets from people who know exactly what it's like to be discriminated against because of their disabilities:

Being Called The Disability

This adds a whole new meaning to "objectification."

We're not animals, and this isn't a zoo.

Some may find a wheelchair to be "confining." Others find it freeing.

Not all disabilities are visible.

This is wrong on multiple levels. Also, while we're at it, OCD is a disorder, not an adjective for your everyday use.

Remember when Trump appeared to mock a journalist with a disability? He later denied that's what he was doing, saying in a statement according to NBC News, "I have no idea who this reporter, Serge Kovalski [sic] is, what he looks like or his level of intelligence. I don't know if he is J.J. Watt or Muhammad Ali in his prime — or somebody of less athletic or physical ability. If Mr. Kovaleski is handicapped, I would not know because I do not know what he looks like." But still — ugh. Just ugh. Endorsing a candidate whose behavior stigmatizes certain groups of people is complicity, no matter which way you slice it.

According to Twitter user @MissEtrian, this label belongs to a swimsuit water extractor.

It'd be nice to get back home, thanks.

I used to do modeling for fun, and the photo editors would ask me every time if I was sure that I didn't want my tracheostomy tube erased from the photo. Every. Single. Time.

Making Our Identity Out To Be A Sad Accident

Should we be expected to, like, cry all day, every day?

Assuming One Disability Is The Same For Everyone

There are many different kinds of disabilities, and even different types of the same disability. Symptoms vary, too. It's important to remember that disability lies on a spectrum; one person's experience may not be another's.

Way back in the day, people who acquired or were born with disabilities were seen as being possessed by evil spirits or even shamed for being a punishment from the gods. We've gotten beyond that, thankfully (or at least, we've mostly gotten beyond it) — but it's disappointing that sometimes we still need a reminder. Newsflash: We're not a lost cause.

Turning Personality Flaws Into A Disability

This is just as bad as saying you're dyslexic when you actually aren't.

Leaving Disability Out Of The Conversation

Feminist intersectionality means including everybody. Period.

Images: Audi Nissen/Unsplash; all tweets used with permission of their users.