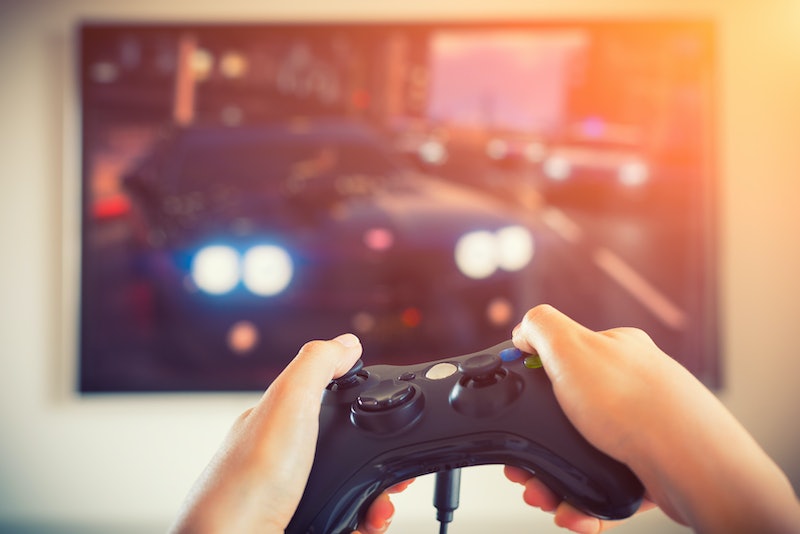 I’ll be honest: There’s a lot of bad creepypasta out there, but there seems to be a particularly massive amount of pastas about video games specifically. But when video game creepypasta stories are done right? Hoo boy. They’re some of the most effective out there, particularly if you grew up as a gamer.

Me? I’m definitely the target audience for these sorts of stories; video games were a family event in my house growing up, with all of us frequently crowding around the PC either to play together or to watch each other play. (For this reason, I am still equally happy wither gaming myself or witnessing them as spectator sports. It’s like watching a movie, only more unpredictable.) Like many older Millennials who grew up at a time when gaming was just starting to take off as part of the home entertainment landscape, I have a lot of happy memories associated with video games; even now that I’m officially a 30-something, pushing those nostalgia buttons is a surefire way to put me in a good mood.

That’s also why good gaming pastas get me in a way that few other things do. Things that look like something I know and love, but feel like something else? That’s the best way to creep me out. And I love being creeped out, so really, it’s a win-win either way.

Yes, I know. My idea of a good time is really, really weird.

But in any event, these nine gaming pastas will probably resonate for those of you who, like me, have a soft spot for a good video game. Even if they make you want to unplug every console that you own, too.

The story known only as the “NES Godzilla Creepypasta” is one of the classics; although video game pastas are a proverbial dime a dozen these days, this one was one of the earliest ones, and it helped set the bar for all future gaming pastas to come. Originally posted in 2011 to the Bogleech forums, it’s truly an epic — in fact, I think it’s one of the longest pastas in existence. And although you might not think a story about a haunted (or possibly demonic) Nintendo cartridge would be engrossing enough to keep your attention for that long… well, think again.

What really makes this one pop isn’t just the story itself; it’s the inclusion of media to enhance the story. The pasta’s creator, known online as CosbyDaf, is a sprite artist — and bless them, they made screenshots illustrating the entire story, from start to finish. Reading this one is definitely an investment of your time, but it’s well worth it in the end.

“Ben DROWNED,” also known as “The Haunted Majora’s Mask Cartridge,” pre-dates the “NES Godzilla Creepypasta” by about a year; its first installment arrived on 4chan’s /x/ paranormal board in September of 2010. It’s also one of the most enduring video game pastas, largely because it stepped so far outside the realm of mere story and became something much, much bigger in the end.

The story starts with a guy posting online under the name "Jadusable" (real name Alex Hall) picking up a used copy of The Legend of Zelda: Majora’s Mask — the wonderfully weird 2000 followup to 1998's Ocarina of Time — and, well… it’s all downhill from there. The kicker, though, is much like it would later be for the “NES Godzilla Creepypasta”: There’s media to enhance the whole thing. Videos, in this case.

“Ben DROWNED” later grew into an ARG — an alternate reality game (not to be confused with an augmented reality game) — and although it eventually got a little too massive for Hall to continue running, the story has proven to be enduring.

Unlike a lot of video game creepypastas, there’s nothing overtly threatening about “The Theater”; no one has allegedly died while playing it, and there doesn’t seem to be anything in its history that may have resulted in the game getting cursed or what have you. It’s creepy all the same, though, largely due to the fact that its menace is so subtle.

Ostensibly, the old PC game known as The Theater was an educational game — the kind you used to play on those ancient machines your school computer lab had during the early ‘90s. There wasn’t much to it; all you did was wander around a movie theater lobby, encountering a Ticket-Taker, and selecting “movies” to watch via a series of posters hung on the walls. The game was buggy, though; it rarely installed correctly and was prone to crashing. But more disturbing are the recollections from some players of … odd occurrences happening as they played the game: A seemingly endless hallway appearing, for example, and the Ticket-Taker character’s face getting replaced by an indistinct swirl.

According to the story, all the original copies of The Theater have either been lost or destroyed. The Ticket-Taker, though? He might still be around.

Although they’re all written by different people, I like to think of the “NES Godzilla Creepypasta,” “Ben Drowned,” and “The Princess” as a a triptych; they’re thematically and structurally similar, and I think they each inform each other in some interesting ways. They all feature something unusual infiltrating a beloved game — the classic trope of the uncanny, described by Freud as the familiar made strange. Additionally, "The Princess" turns the idea of the damsel in distress on its head; rather than being someone the player needs to rescue, she’s someone the player needs rescuing from. (Both versions of the trope are equally problematic, I would argue, but this one is interesting as a departure all the same.)

But seriously, you guys: If you see her, turn off the game.

A side note: Creepypastas are frequently written from the first person, something which I think helps strengthen the argument that they’re the urban legends of the digital age. I often find, though, that my favorites are written from the third person — not in a classic storytelling kind of way, but in a way that suggests that they’re official reports of some sort. That’s the format that “Come Follow Me” takes, and I think it’s enormously effective.

Imagine a game where you have two options for your player character.

Imagine a game where whichever character you choose results in an entirely different game.

Imagine a game where these two characters exist to unravel a mystery.

Imagine a game where one of those characters’ paths is so difficult as to be virtually unplayable.

Imagine a game you can only play once. A game which, after you’ve completed it, self-destructs.

Imagine a game where only 5,000 copies were ever made.

Imagine a man has found the last copy of the game.

Imagine being him faced with the choice of which character he will play, knowing that no one will ever be able to play the game again afterwards.

Imagine him crying in the face of such a choice.

Although it’s been defunct for almost a decade, Invisible Games — the site on which the “Killswitch” story originally appeared — is still full of all sorts of interesting tales about weird technology. I’d highly recommend poking around if you have the time.

I’ve always had a soft spot for text adventure games; some of my earliest gaming memories involve playing Hitchhiker’s Guide to the Galaxy, Ballyhoo, and the Zork series with my dad on a huge, clunky laptop with a blue screen (a perk of his job, long before it was the norm for workplaces to supply laptops and other devices to employees as a matter of course). But although I probably would have dug a game like Pale Luna in theory (if it had actually existed, of course), in practice… uh, not so much. Because, well… there’s a “prize” at the end of it, and it’s absolutely horrifying.

Another pasta of the “cursed game” variety, “Misfortune.gb” describes a retro video game from the ‘90s made for a handheld system. Ostensibly it’s a horror game; it features as the player character a boy exploring a weird, gothic-style building and encountering some sort of evil… thing. (It’s not clear whether it’s a ghost, a demon, a devil, or something else entirely.) Challeng the Evil Thing results in the player being forced to make their way through a number of puzzle-filled rooms.You’re often asked to make a choice, with the stipulation being that if you choose wrong, “misfortune will befall your loved ones.” Making a mistake brings you to a game over screen depicting the Evil Thing alongside a dialogue box reading, “I am God here.”

But the game itself is only part of the story. There’s also an account from someone whose friend played the game. You might want to read it.

You’ve heard of “Polybius,” right? It’s pretty much the granddaddy of all video game pastas. In fact, I’m not even really sure if it actually qualifies as a pasta; it’s more like a classic urban legend, with the particulars of the story being passed around rather than the exact text getting copied and pasted over and over and over again. According to the legend, a game cabinet called Polybius started appearing in arcades in the Portland area of Oregon in the late ‘70s and early ‘80s; however, it wasn’t a normal arcade game. Players allegedly reported experienced a variety of severe physical side effects after encountering the game, ranging from nausea to sleep disruption to amnesia. More mysterious still was when the cabinets started disappearing again — taken by men in suits.

Worth noting: “Polybius” is also the name of a Greek historian. According to his philosophy, historians should never report anything they can’t verify through interviews and eyewitness accounts.

More like this
The 'Hocus Pocus' Sequel Finally Has A Release Date & It Makes Total Sense
By Shannon Barbour and Radhika Menon
Remember These Ancient Pieces Of '90s Tech?
By Lucia Peters and Emma Carey
11 Trends From The ‘90s That Made You Feel So Cool
By Julie Sprankles
10 Eurovision Moments That Celebrate The Weird & Wonderful Camp Extravaganza
By Sam Ramsden
Get Even More From Bustle — Sign Up For The Newsletter