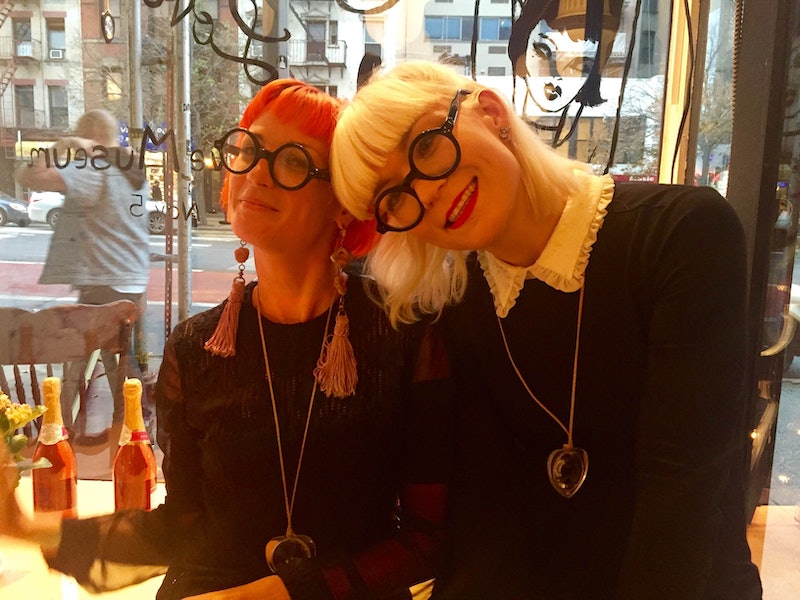 Modern dating is tough, no doubt about it. Hurdles like hookup culture and heteronormativity can make finding a partner difficult and time-consuming. But what if I told you that feminist matchmaking exists, and it's actually pretty fantastic? That's the drive behind the Modern Love Club, a matchmaking institute that focuses on empowering single people and embracing relationships of all kinds. While the business has been around for almost a decade, the Modern Love Club recently moved into its new home, an East Village store location in New York City.

"When I first started, literally no matchmakers would take on women as clients," Amy Van Doran, a professional matchmaker of eight years and founder of the Modern Love Club, tells Bustle. "Or maybe if they had, I wasn't aware of them. The (matchmaking) model had been very wealthy men with much younger women." She works with straight people as well as the LGBT community, old, and young. About half of her clients are men, and half are women.

Instead of following the traditional matchmaking model of matching very wealthy, often older men with much younger women (think The Millionaire Matchmaker), Van Doran works with people with all different kinds of back stories, even those who may be statistically hard to match, as long as they're creative, hip, and fun individuals. She only works with about 16 clients at a time, but since 2008 she's worked with nearly 6,000 people, kick-starting every client relationship with an hour-long in-person interview.

The premise of Van Doran's matchmaking service is simple: People hire her to set them up on dates until they fall in love. She's matched hundreds of people over the years, simply by hearing people's stories and figuring out who they might connect with among her clients. "I didn't go to college for matchmaking," says Van Doran. "I don't have magical powers. I just sat and I listened and then the dots started connecting."

"I can't guarantee [self-actualization], but if everyone's becoming better people in the process, that's literally the only thing that matters."

Obviously, not all of her clients fall in love, get married or live happily ever after. People break up or make unexpected choices that turn their love lives upside down. Sometimes, a client's matchmaking success doesn't involve making a match at all. "I had one client who went on 72 dates just to figure out that what he didn't want was a relationship!" she says. "Him learning that information, to me, that self-realization is as important as people falling in love. I can't guarantee [self-actualization], but if everyone's becoming better people in the process, that's literally the only thing that matters."

If you think about it, that's a huge step away from the typical, outcome-driven notion that dating is all about finding a compatible partner in the end. But the world of matchmaking isn't the only thing that Van Doran and her team are looking to reinvent. Located at the headquarters of the Modern Love Club is The Love Museum, also co-founded by Van Doran and curated by her friend Marina Press. The Love Museum hosts different exhibitions every month that examine the relationships between women and society.

Van Doran calls the Love Museum "super female-centric," a safe haven for creative women that's supported and run by women. "I'm a professional matchmaker by day, and I thought I'd be cool to turn my office into a love museum and gallery," Van Doran tells people who peek into the gallery with curious looks. They're lured in by the twinkling lights and bottles of champagne sitting by the storefront window. (It's super cute, by the way.) Near the front of the museum lies a book of love advice that Van Doran's been collecting from people who come in to view the art. One person scribbled, Don't go to bed mad at each other. Another: Learn all their favorite recipes; save for a rainy day!

"I was worried my clients were concerned about confidentiality or that people could walk down the street and just be seen, but they're loving it," says Van Doran. "People just start coming in and they start hitting on each other, and it just becomes a weird Bermuda Triangle for romance. It's been my dream."

The Love Museum's October exhibition, called "Girls I Love," featured feminist artwork by all of Van Doran's favorite female artists. Women are the subject or "gaze" of most of the artwork, Press explains, but the art emphasizes their individuality and acceptance of their sensuality and playfulness just as they are, and not for the viewer's pleasure. It also gives female artists an opportunity to explore an alternative narrative of what it means to be a woman or feminine. "They're just living for each other," Van Doran says of the women in the paintings, collages, and sketches.

Press and Van Doran suggest that viewers look at the artwork via filter, or "through the lens of love," though all of the artwork is open to interpretation. Jenna Gribbon, an artist featured in "Girls I Love," says she temporarily falls in love with all of her subjects whenever she's working on a piece of art. Two of her paintings at The Love Museum came from a portrait series called "In Conversation," in which Gribbon took snapshots of friends during long conversations with them and then recreated those situations via oil painting. Those paintings focus on a subject (her friend) in mid-thought or depict "the moment when someone is either intently listening or expressing something," she says.

One painting from "In Conversation" is a portrait of Van Doran, a good friend of Gribbon's, and the exact moment when she was trying to figure out a particular match for her job. While the subject's face is realistic, the rest of her body is shrouded in what she calls "a surreal magical landscape." That landscape, Gribbon says, is often comprised of items that were around the subject at the time, from other environments, or made up completely. It brings together Gribbon's interior world with that of the subject's. "That's the thing that painting can do," she says. "It gives you the freedom to make choices about the reality you create around the [subject] in a portrait.

Both The Love Museum and the Modern Love Club aim to break down conventional ways of thinking about art, feminism, and, of course, love. Over the years, Van Doran says she's noticed a change in gender roles and general dating rules, such as the increasingly more mainstream path of non-monogamy and long-term relationships that last for years without necessarily leading to marriage.

Yet, Van Doran adds, there's an uncertainty with navigating this new paradigm shift in dating. "We have these have options but...we haven't quite figured out where it's going because it's such a seismic shift. [We] haven't empowered ourselves to re-imagine what the future of love is."