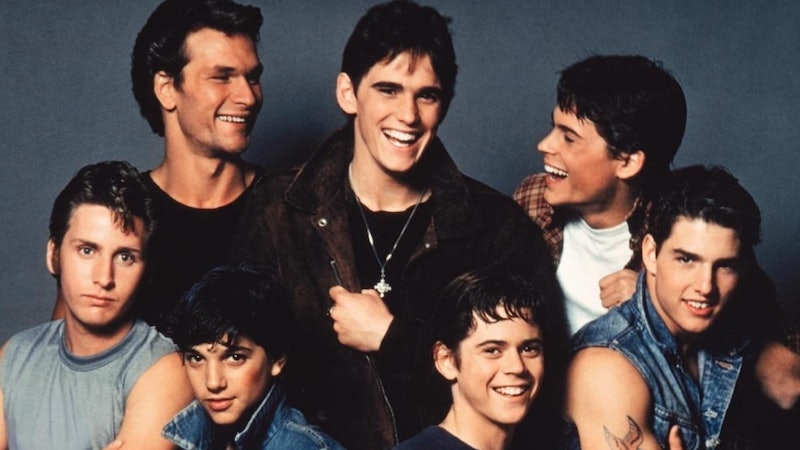 Young adult readers started off the week with a bang on Monday, as The Outsiders author S.E. Hinton's Twitter rant sparked a debate on the relationship between reader interpretation and author intent. Responding to a since-deleted tweet, Hinton took issue with "little girls thinking [her] characters are gay," prompting a firestorm of discussion on whether a writer should have a say in how readers interact with their work.

Most authors today have come to accept that, once they are published, their characters and stories are not their own. Elena Ferrante has built a lucrative career off of that exact premise. In the wake of recent casting decisions, J.K. Rowling and Stephen King have made it clear that they don't mind having their characters reinterpreted for stage and screen.

[Spoilers for The Outsiders ahead]

In The Outsiders, Dallas is a hardened, older Greaser, while Johnny is "the gang's pet": a small, soft, and quiet boy. No one expects Johnny to wind up killing another boy, and Dallas helps Johnny and Ponyboy escape the law and lie low. When Johnny's big heart later gets him paralyzed and killed, Dallas commits suicide by cop.

None of this is fanfiction, but Hinton's depiction of the obviously close friendship between Johnny and Dallas has caused some fans to interpret a deeper level to their relationship, inspiring fan art and writing that offers a more explicit portrayal of the boys' intimacy. This seems to have been the catalyst that sparked S.E. Hinton's Twitter rant.

In spite of her assertions that she "ha[s] many gay friends," Hinton doesn't seem to have much grasp on how LGBTQ identities work. She upholds her depictions of Johnny's and Dallas' interactions with young women as evidence that they were straight, clearly ignoring the fact that you can be sexually and romantically attracted to more than one gender.

Additionally, Hinton's claim that she "did not know any LGBT people" when she wrote The Outsiders ignores the high number of non-heterosexual people who were forced to remain closeted in the 1960s. Chances are good that she did, in fact, know a person who was not straight, but was simply unaware of that person's sexual orientation.

It's important to remember that this isn't the first time Hinton has come under fire for her problematic attitudes. The Supernatural fandom on Tumblr has plenty of stories about the Tex author's attitude toward her fellow fans. She has also voiced opposition to fanfiction derived from her work in the past.

Fans have the right to interpret work as they please, and authors have the right to refute their interpretations. For readers from marginalized communities, fanart and fanfiction offer the opportunity to recast their favorite characters as people like themselves. Attempting to silence those fans creates an environment of hostility toward not just the fans themselves, but toward entire communities.

No one is asking Hinton to retroactively change the sexuality of characters she wrote, or to admit that Johnny and Dallas are gay in her mind. She doesn't even have to be OK with fans shipping Johnny and Dallas together. However, while she is entitled to her opinions, she is not protected from criticism on the basis of those opinions.