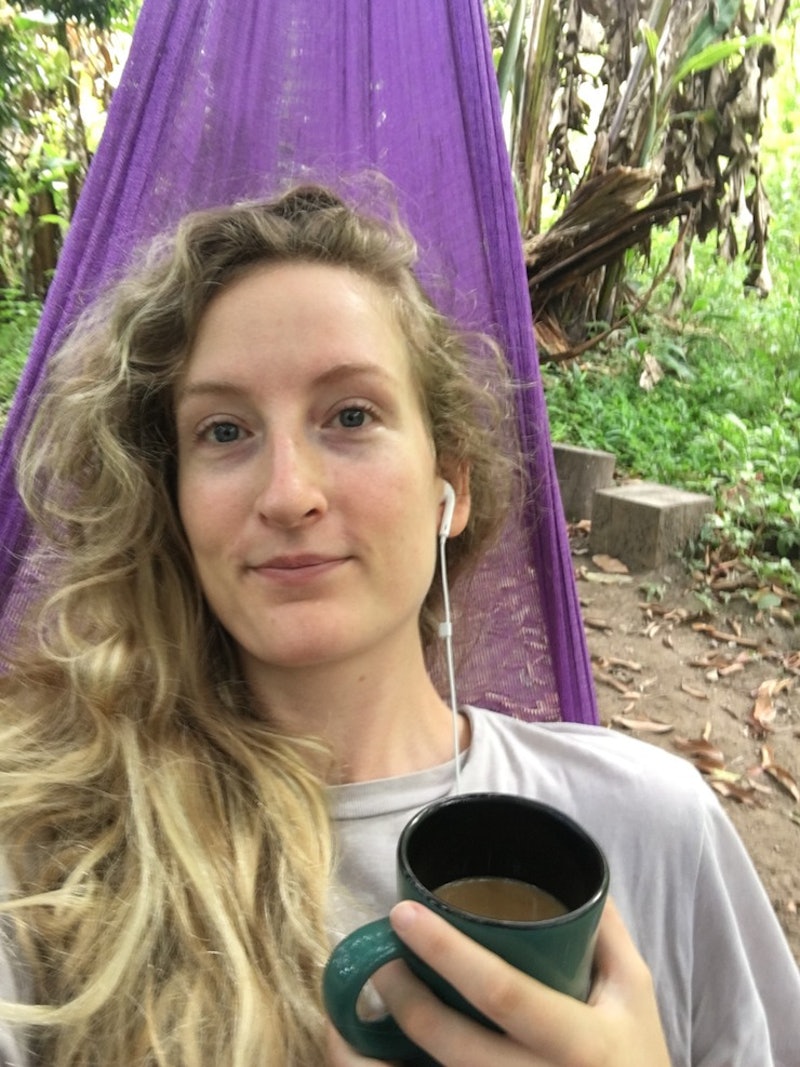 Last August, I got to travel around a pretty decent chunk of Southeast Asia — and I went makeup-free for most of it. After spending some time in NYC and seeing how many women rock the natural look up there, I'd already been toying with the idea of going without makeup for a month. So when my cousin offered to pay my way to Bhutan so I could watch his three daughters for a few weeks — and my job actually allowed me to take the time off work to do it — I decided to spend four of my five weeks away with a bare face. You know, for the sake of journalism.

Since so many of New York's badass women had unknowingly inspired me to throw out all of my foundation and under-eye concealer a good six months prior to my adventure in the Far East, I figured going without my trusty mascara, brow gel, and tinted moisturizer wouldn't be that big of an adjustment for me. I mean, I was about to be nannying in the jungle for four weeks — not going on dates or hitting up fancy bars with my friends. I honestly didn't think I would miss wearing the stuff, but I did fully expect to feel less beautiful going makeup-free. I ended up being wrong on both counts.

Here's what happened when I didn't wear makeup for a month.

At First, I Felt Totally Naked Without Mascara

You can't tell by looking at this picture of me and my little cousin, Vivi, but I actually have really long eyelashes. The thing is, they're also blonde AF — so when I don't wear mascara, my lashes pretty much disappear. On top of that, I've had stubborn dark circles since pretty much forever, and wearing mascara is one way I've managed to feel less self-conscious about them over the years. I'm also just a big fan of the stuff, because it's fun and pretty. For these reasons, I typically wear mascara on a daily basis.

So when I took this particular photo on day two of my experiment, the first thing I noticed about it wasn't how happy I looked — it was how naked my eyes looked without their usual coats of mascara. It didn't take long for me to mentally chastise myself for this, though. I mean, how could I write about being body positive and feminist on the Internet and then be so critical of my own appearance? On top of all that, I felt guilty for focusing on something so trivial when I was literally on the adventure of a lifetime. I decided to make more of an effort to work on my negative self-talk going forward.

In A Weird Way, Going Makeup-Free Actually Made Me Feel Less Self-Conscious

Even though going without eye makeup left me feeling like a lash-less wonder, going all-natural also helped me feel safer, in a way. Don't get me wrong, the Bhutanese people I met were perfectly respectful, and Bhutan is well known for being one of the safest countries for women to travel alone — but none of this prevented me from standing out in a major way.

Unsurprisingly, there's not exactly a surplus of tall, blonde, blue-eyed, Western women hanging out in the Himalayas — so I quickly learned that "blending in" wasn't going to be an option for me while I was there. Since my anxiety often leaves me feeling self-conscious and fearful even when there's nobody looking at me, I was happy to discover that going makeup-free was one way I could potentially draw less attention to myself while simultaneously easing my anxiety.

Since I didn't wear any makeup the whole time I was in Bhutan, I don't know for certain that wearing makeup would have upped my stare count. Honestly, it could have been all in my head — but since I typically encounter more street harassment in the U.S. when I wear makeup, I figured going all natural would probably help me avoid unwanted attention in Bhutan as well. All I know for sure is this: going makeup-free helped me feel less self-conscious, and I needed that.

After A Week, I Started Feeling More Body Positive

After just a few days of going without makeup, I found myself focusing on all the things I liked about my appearance rather than thinking about how makeup might help me look my best. When I looked at the photo above, I noticed how clear my skin has become over the years (take that, puberty!) instead of immediately worrying that my dark circles would make me look tired. Rather than lamenting my bare-naked eyelashes, I thanked the magic that is genetics for gifting me with my healthy, blue eyes and Blake Lively hair. I saw the flush in my cheeks and thought of how great hiking through prayer flags made my mind and body feel — and I thought nothing at all about whether or not my eyebrows were "on fleek" enough.

After less than a week of going without makeup, I'd already started seeing myself as a more beautiful person. I don't know if this started happening because I wasn't being inundated with as many pictures of seemingly-flawless models, or if it was because I was hiking daily, or if it was simply because being in a developing country forced me to put into perspective how unproductively negative I often am about myself. Maybe it was all of those things. Whatever got me to feel this way, it was rad.

There was a time when I wouldn't even post a photo of myself on Instagram if I didn't have makeup on. Fortunately, that started changing a couple of years before I went makeup-free for a month — but it changed even more after this experiment. Literally every picture I shared of my time in Bhutan was makeup-free — and because these photo posts were my main method of communicating with loved ones back in the States, I shared a lot of them. I was a little bit hesitant at first, (partially because I presumed my new dude was going to be seeing all of these) but I was mostly just so thrilled with my beautiful surroundings that I couldn't wait to show everyone back home.

As it turns out, the more I posted makeup-free photos, the less I cared about how I looked without makeup on. I'm sure being in a developing nation helped with this. I mean, it's hard to care about things like mascara when clean drinking water is a luxury. That said, I think simply getting in the habit of going without makeup is what really helped me care less about how I appear in photos. I've been back in the U.S. for over a month and I still feel just fine posting makeup-free Instagrams now.

I Took Better Care Of My Skin

For as long as I can remember, I've enjoyed grooming and it's many therapeutic benefits. I've washed my face twice a day since puberty, and even when I was in junior high, I considered things like sleeping in makeup and not wearing sunscreen sinful. But when I stopped wearing makeup, I started caring even more about protecting my skin.

I'm sure part of this had to do with that fact that I was residing in a country with an average elevation of 8,000 feet above sea level, (where I live the average is a mere 1,7772 feet) but I think just knowing I couldn't cover up my skin with tinted moisturizer had something to do with it also. At any rate, for the duration of my experiment, I took better care of my skin than ever. Whether I was about to hike up a mountain, or just stroll down to The Egg Lady's house in my cousins' village, I made sure to slather my face with sunscreen and bring either my umbrella or my Yankees ball cap along for extra sun protection.

I Still Compared Myself To Other Women, But Not In The Same Way I Have In The Past

Lots of women wear makeup in Bhutan, so it wasn't uncommon for me to meet Bhutanese ladies with beautiful makeup on their faces. The woman in the picture above is one such lady, and her eye makeup was stunning. Admittedly, I thought she looked way nicer than me — but instead of mistakenly thinking her obvious beauty detracted from my own, I mostly just admired her flawless eye shadow.

In the past, I might have had thoughts like this one: "oh dang, I look like a garbage person next to this fox," or, "crap! why didn't I wear makeup?" This time, however, I simply admired her artistry. Then I started getting excited about messing around with makeup again. Which brings me to...

Near The End, I Got Really Excited About Wearing Makeup Again

As you can maybe tell by looking at my face in this photo, this was near the end of my trip and my experiment. When I took this photo with my little cousins in the back of their dad's Mahindra Bolero, I was exhausted, stoned on actual jungle weed, and more than a little nervous about making the long trek back to the States. In addition to all of that, I was so ready to wear makeup again that I almost blew the whole experiment. For me, grooming has always been a reliable calming ritual, and going without it for so long wasn't easy. Plus, after going an entire month without alone time or a hot shower, the thought of applying makeup felt luxurious to me. Waiting was worth it, though.

When I finally did let myself apply makeup again (in the bathroom at LAX, in case you were wondering) it was really fun. I had a six-hour layover, so putting on makeup was a fun way to pass the time — but it was more than that. For the first time in years, I saw makeup as the luxury that it is instead of a professional and personal necessity. After a month of going all-natural all the time, the whole ritual of putting on makeup felt like a damn treat to me. It still does.

I Changed The Way I Approach Makeup

Now that I'm back, I still wash, moisturize, and sunscreen my face on a daily basis — but I don't wear makeup when I don't feel like it. I feel like makeup should be a fun thing, so I've decided not to use the stuff at all on those rare days when it feels like a chore to me. I still wear makeup often, though — partially because the ritualistic grooming chills me out. Now, since I only wear makeup when I feel like it, I pretty much always enjoy the entire process. And that's a beautiful thing.