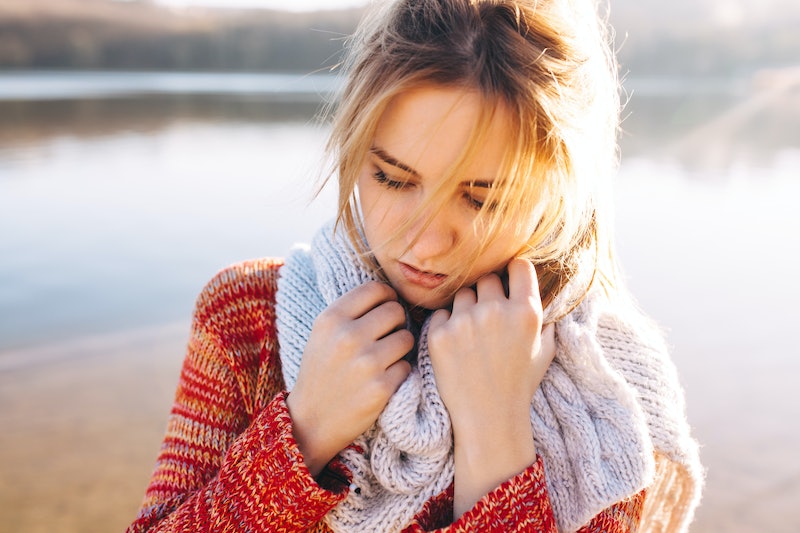 The fact that it's 2016 and we're still battling a great deal of stigma around mental illness is beyond frustrating, but it's not something that's going to magically go away overnight. People suffering from depression, anxiety, bipolar disease, and any other similar diseases constantly have to face insensitive comments, rude questions, and heartless demands to simply "pull themselves together," all because there are a lot of people in the world who don't fully understand how debilitating mental illness truly is. This can make it very difficult for them to treat themselves properly, and it can even make it hard for them to fully accept their own disease.

It's estimated that one in every five American adults will suffer from a mental illness at some point every year, which equals around 44 million individuals. In fact, you probably know someone in your family or close circle of friends who is mentally ill. Regardless of the close proximity many of us have to these diseases, society as a whole isn't doing a great job of spreading acceptance and urging treatment. Instead of caring for mentally ill individuals with all the dedication we may look after someone with cancer, we instead poke fun at someone who is depressed and insist it's "all in their head."

Having suffered from anxiety and an eating disorder for more than 10 years, I know what it feels like to have people around you completely diminish your mental illness, like it's nothing more than an itch that can be willed away with a good scratch. I've also learned, though, that while it may not seem influential at the time, speaking up for yourself in a calm, firm way when people offend you can make a big difference in the long-run, even if it just gives you an extra boost of confidence you need to look after yourself.

Here are five things to tell people when they invalidate your mental illness.

"You Can't Judge My Health Just By Looking At Me"

No matter how many times we've been told to never judge a book by its cover, we still think we can figure out what a person is dealing with by their outward appearance. Sneezing and blowing their nose? Must have a cold or the flu. Wearing a cast and using crutches to get around? Must have broken a leg. But not everyone battling a mental illness wears it on their sleeve in this way.

Therefore, when someone tries to tell you to get your shit together and stop being sad, you have every right to tell them that they don't have a clue about what's going on internally just by looking at you from the outside. Maybe they'll think twice the next time they prepare to judge someone else so quickly.

In some cases, it's best to be brutally honest. People need to understand that what they say has a big influence on the people around them. Just like we have a responsibility to make sure the words we use aren't racially offensive, we should also be wary of how our words can affect someone suffering from a mental illness.

Saying something this bold may feel impossible at first, because being vulnerable is never easy — but it could make a huge difference. Even if the person doesn't respond in an optimal way (chances are they'll probably get defensive and try to argue with you), they'll eventually think it over. They may even start to come around and see that the way they've been talking has been rude and hurtful.

A person with Crohn's disease has to watch their diet very closely and potentially take medication that prevents flareups. Someone with a broken back has to go in for physical therapy regularly. Similarly, a person with a mental illness needs to receive the proper treatment that will help them recover and maintain their health. That could mean they're in therapy on a regular basis, they're doing mindful meditations every day, or they're taking meds that help them manage their symptoms.

Whatever the case may be for you, don't be afraid to tell someone that your illness is just that — an illness. It's not a phase. It's not a mood you're in. It's a quantifiable sickness just like any other chronic disease someone goes to the doctor for, and it deserves to be treated that way.

People tend to think that being mentally unwell just means you have a lot of anxious, fearful thoughts running through your head. While that part may often be true, they have no idea that diseases like anxiety and manic depression also cause symptoms like insomnia, chronic indigestion, and severe fatigue, just to name a few. Normal physical activities, like walking and driving, can be painfully arduous. Combine that with the turmoil that's going on in our heads and it's a huge burden for us to carry around every day.

We have so much sympathy for people with visible physical ailments. Why can't we transfer some of that compassion to the thousands of individuals fighting a mental illness? Because, make no mistake, the disease can be just as immobilizing as any other sickness that threatens to ruin your life.

It sounds so silly, but sometimes people need a reminder that your illness isn't something you've invented out of the blue. It's a recognizable illness that researchers, doctors, and professionals of all kinds acknowledge and treat. You may never know the exact cause of your own mental illness, but science has proven that you harbor a chemical imbalance that has most likely been passed down genetically. This isn't something you've chosen to take on, just like nobody chooses to have cancer.

Reminding someone of this fact will hopefully help them understand that you're waging a war against your biological makeup, not simply feeling blue or under the weather.

More like this
10 Ways To Be More Empathetic To Your Partner
By Raven Ishak and Lexi Inks
The 19 Best Tweets & Memes About Bisexual Awareness Week
By Lexi Inks
This Psychological Effect Might Be Keeping You From Hitting Your Goals
By Lexi Inks
Are Quality Time & Gift-Receiving Love Languages Compatible?
By Lexi Inks
Get Even More From Bustle — Sign Up For The Newsletter