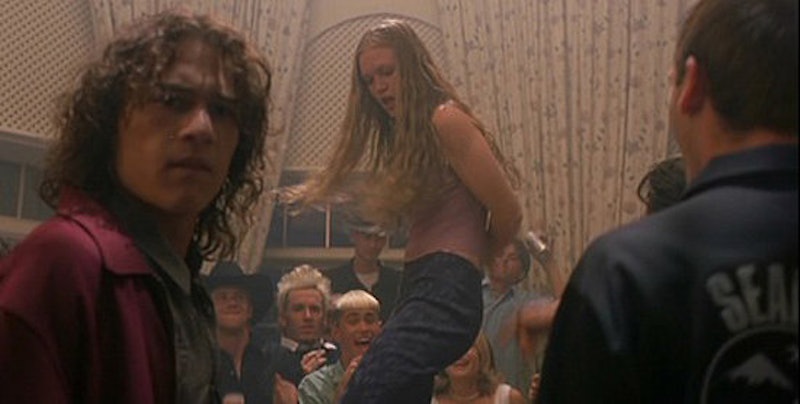 To loosely and not at all accurately quote a classic '90s jam, "Ain't no party like a '90s party, 'cause a '90s party don't stop." Am I right, or am I right? It didn't matter if you didn't even have your driver's license back then — parties during the '90s were the bomb dot com, especially if they included the requisite things that made every '90s party complete. Ah, at the very mention of such a splendid era, I can feel myself transported back to my dad's boat house and the many, many, many shenanigans that took place there when I was a choker-wearing, flannel-loving, Chuck Taylor-ed teen. The nostalgia is real, y'all.

Like many things about the '90s, I concede that the parties may not have been quite as epic as we thought they were back then or like to think of them as now. That entire decade is typically viewed through rose-colored glasses, so it's entirely possible the parties would seem totally lame to teens today. In fact, even though today's teens have been known to throw '90s-themed parties, I'm pretty sure they would have scoffed at what actually went on during our shindigs back in the day. But who cares? We had fun, and that's what matters.

So join me in celebrating the mastery of '90s parties by taking a look back at the very things that those '90s parties simply wouldn't have been the same without.

Much like teens today draw inspo from the '90s, teens in the '90s looked before them to the '70s. You couldn't swing a devil stick at a '90s party without hitting a mini disco ball, lava lamp, or black light. Groovy, baby.

We were all about our midriffs in the '90s. Whether it was tube tops and overalls or babydoll t's and pleated skirts, we found a way to show off some abdominal skin.

At a time when Gushers, Fruit By the Foot, Bagel Bites, and Dunkaroos rose to prominence, would you really expect anything less? Sometimes I think '90s parties were just an elaborate excuse to go bananas on the snack food our parents wouldn't let us have unless it was a "special occasion."

Depending on your age, this either meant puckering up during a slobbery round of "Spin the Bottle" or getting locked in a dark closet with your crush (or not your crush, ugh) during "7 Minutes in Heaven."

Hey, I'm not saying this was an adult beverage, per se — perhaps your parents weren't keen on you providing Capri Suns for 15 of your closest friends. Or maybe, hypothetically, your older bro bought you a six-pack of Zima (with Jolly Ranchers to drop in for flavor, natch) to split with your friends.

Slow ballads like "Kiss from a Rose" by Seal or "All My Life" by K-Ci & JoJo gave you something to exchange googly eyes with your crush over, while hits from Tupac and the Notorious B.I.G. pumped the party up.

Oh man, I was the worst at any of these dances . . . and yet there I was at every '90s parties, fumbling my way through the Macarena, the Train, the Tootsie Roll and just life in general.

8. A Round of Hacky Sack

Leave it to a '90s guy to never forget to stuff a hacky sack in one of the many pockets of his cargo pants or oversize JNCOs. In their defense, a round of hacky sack did come in handy to break up awkward silences at sub-par parties.

Remind me again why we always thought conjuring spirits from the great beyond was such a good idea? Parties were the perfect excuse to pull out the Ouija board, dare our BFFs to summon Bloody Mary, or see if we could make each other levitate during "Light as a Feather, Stiff as a Board."

When it came to having parties at the roller rink, all the cool kids were doing it. So if you wanted to be a cool kid too, you brought along your own personal pair of roller skates or blades to show off your impressively smooth moves beneath the flickering dots of the disco ball.