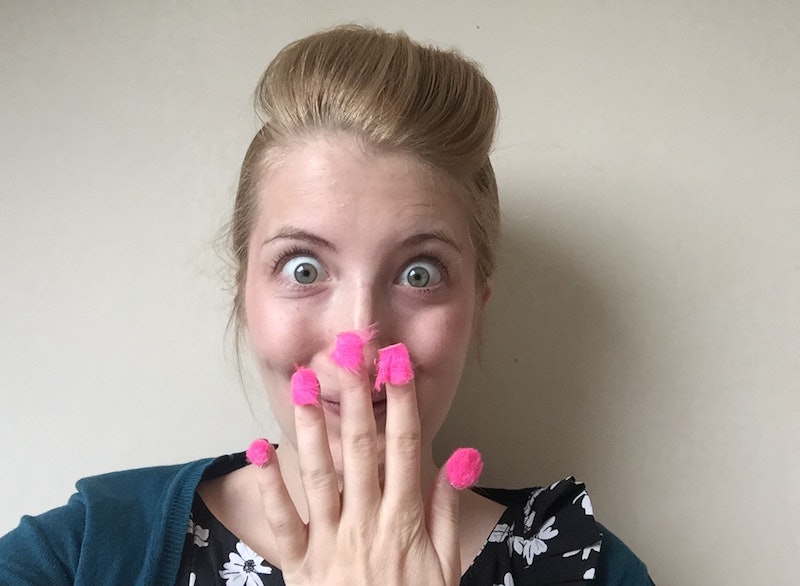 In the fashion and beauty realms, there's always something wild happening. Luckily, I consider it my life's passion to sniff out strange and fascinating trends like a dog in the style squad. That's why I tried to DIY my own furry nails and test them out IRL — I wanted to see how easy the look is to create, and how they translate to functioning in the real world.

For those unenlightened on the subject of furry manicures, my inspiration came from Libertine's spring/summer 2017 show that saw models wearing a variety of kooky nails, including some eccentric, bright pink, furry nails. However, it's worth mentioning that Jan Arnold, co-founder and style director of CND and creative mastermind behind these fuzzy, flamingo nails, used this fluff ball mani in a contemporary concept.

According to Cosmopolitan, Arnold, "...switched up her nail detailing tactic, giving each model a different look for each hand...she gave this model one hand of faux pink fur puffs and designed a bejeweled look for her other hand. She called this concept a 'split-style' manicure, where one hand is flocked (fuzzy and textured) and the other is rocked (high-shine, architectural)." But, considering my limited craft skills, I decided to walk before I could run, so I tackled just one of the key looks: The fluffy nails.

Of course, these talons looked rad, but I wanted to see how they worked in reality when work, food, and trips to the bathroom were involved. So I tried to DIY my own fluffy nails and give them a test drive in real life. Here's how it all went down.

As you can see, the nails in the Libertine show looked like they were made of Care Bears and IMO, had a very new-age '90s vibe about them.

To start, I laid out all the items I would need for this DIY. This included: Faux fur, a false nails kit, a pen, PVA glue, and a pair of scissors.

I realized I couldn't go into this without a plan, so I devised a simple solution.

I began to draw around the false nails so I could get an indication of their size, so when it came to it, the pieces of fabric would fit nicely onto the false nails.

After this, I cut each piece out and lined them up with their matching nail.

My final step was to glue the fabric onto the nails and play the waiting game. In hindsight, I should have used the strong nail glue that came with the nails for this part, as the PVA remained tacky for ages and didn't work as well as I'd hoped.

Next came the application. I carefully added a drop or two of the nail glue to each false nail and systematically stuck each one to the correct finger nail.

However, as you can see, things didn't go to plan when it came to my right hand, due to the fact that I'm right-handed.

The faux fur from the pinkie nail got stuck to the table. I tugged on it, thinking that the glue wouldn't be very strong, and I pulled part of the table off with it. Oops.

I was left with glue stuck to my hand and fingers, which was annoying to say the least. I grew a little concerned about how to remove it from my skin, seeing as the table didn't fare too well. But, I decided to deal with it later.

I was ready to test drive my new mani. I felt so chic with my nails that appeared to be covered in psychedelic space rat fur. Aren't they darling?

So the first challenge I came up against was typing. As a journalist, I use my computer almost every day throughout the week. I wanted to literally carry on as normal and not make any changes to my every day activities, to see how well my new nails fared.

It's probably worth mentioning that I hate wearing false nails. I've never had acrylics and I've tried false nails only once in my life. This isn't because I dislike false nails, it's just I find it difficult to function normally while wearing them. So I usually avoid them.

Typing was very weird at first, because I had a few extra millimeters (and a bunch of fluff) atop my natural nails. However, after a while it wasn't too bad, I got into a rhythm, and I found I could type at (more or less) my normal speed. I was impressed and I began imagining my life with glamorous false nails. That was, until I came to my next challenge: Food.

I was a bit grossed out that I'd have to prepare my food with bits of glue and fluff stuck to my fingers, but I didn't really have much choice. I hadn't prepared my lunch in advance, as I was having soup. This meant I needed to toast my bread, add spread to my toast, and warm my soup up in the microwave. Then obviously I had to eat my lunch. I was slightly sceptical as to how this would play out but I gave it my best shot.

Preparing my lunch wasn't half as bad as I was expecting, plus I found I could eat my soup easily with a spoon.

But, when it came to my toast, I had to hold my bread with my gluey fingers and it freaked me out a bit.

It was then I noticed my thumb was turning an unusual shade of blue. This was slightly alarming and I wondered if the false nail glue (that had spilled and hardened onto my thumb) was having an adverse effect.

I decided to move onto the next part of my experiment pronto, which was the bathroom trip. I honestly didn't have high hopes for my Frankenstein nails, but a small part of me hoped they would fare well.

My trip to the bathroom was nothing short of a disaster. I'll spare you the gory details but as a little insight, it was difficult for me to remove my undergarments, so you can imagine how the rest of the experience went. The whole point of this experiment was to test out how well these nails would fare in "normal" life, so with that in mind, I washed my hands as I normally would and that's when things went from bad to worse.

As you can see, I lost a piece of fluff down the drain and the other ones reminded me of Treasure Trolls that had been left out in the rain. It was quite a sad moment.

When it came to drying my hands, the situation nose-dived further.

The faux fur lost its stickiness and began to peel away from basically all of my nails. At this moment, I knew this experiment was over.

I'd give these nails 10/10 for aesthetics, but 1/10 for practicality. These type of nails look fabulous on the runway, but when it comes to your day-to-day, you can't do most things. You could possibly wear them on a night out, so long as you didn't visit the bathroom all evening. Or if you did visit the bathroom, you could drip dry and use sanitising hand gel, but that's not an ideal (or hygienic) scenario.

FYI, if you're going to try this at home, learn from my mistakes. It's always advisable to read the instructions on beauty products, so you don't end up almost ripping your skin off due to ignoring nail glue instructions. Otherwise, go forth and fuzz up your nails — the fact that they look cool will make up for the discomfort of wearing them, that I can promise you.