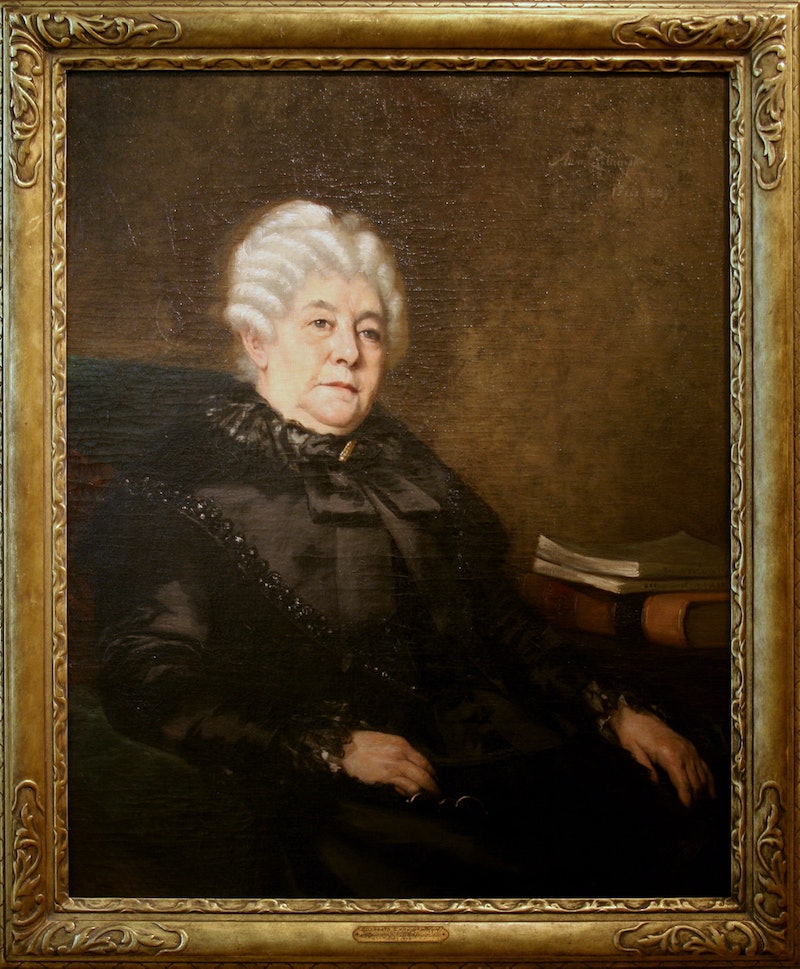 People excited about women's right to vote and their power to elect the first woman president of the United States might be wondering if there's a way to visit Elizabeth Cady Stanton's grave on Election Day. As it turns out, there is, but unlike Susan B. Anthony's grave — which has been accumulating "I voted" stickers for quite some time now — you can't put anything on it. You can, however, put these stickers on a poster next to the grave, along with the graves of some other notable suffragettes.

The trend of putting "I voted" stickers on the graves of women's rights activists began back around the time of the New York primaries, when people started sticking them on Anthony's grave in Rochester, New York's Mount Hope Cemetery. In the days leading up to the election, women have been doing this to celebrate their right to vote. But Anthony, of course, is one of many suffragettes who helped give us that right.

Elizabeth Cady Stanton campaigned alongside Anthony and other activists for the 19th Amendment, which gave women the right to vote. Neither of them got to see its passage, but their work laid the foundation for it. Stanton also was active in the movement to abolish slavery and organized the first women's rights conference in Seneca Falls, NY in 1848.

The Bronx's Woodlawn Cemetery houses Cady Stanton's grave, along with those of suffragists Carrie Chapman Catt, Mary Garrett Hay, and Alva Vanderbilt Belmont. Executive director David Ison told The New York Times that the cemetery is handing out stickers for people who want to carry on the tradition Anthony's grave's visitors started. Each grave has a sign next to it with an American flag that reads, "Place your 'I voted' sticker here!" The cemetery prohibits putting stickers on the stones themselves, however. "Stickers on graves have become a problem," the cemetery's historian, Susan Olsen, told The Times.

"We thought, 'We’re going to do something that’s not all about Trump and all about Clinton,'" Ison explained. The suffragists have been associated with Clinton, however: She's worn white pantsuits as a possible reference to their own white outfits, and other women have dressed like her to celebrate their right to vote.

The four graves at Woodlawn Cemetery haven't become as much of an attraction as Anthony's, though. The staff suggested that Anthony may be viewed as more iconic since she has appeared on the $1 coin.

Whether or not you're able to make the trip to the Bronx after you cast your vote, the four women at the cemetery are worth remembering. Cady Stanton wrote some of the most famous speeches on women's rights. A bit later in the movement, Catt was president of the National American Woman Suffrage Association and founded the League of Women Voters. Hay served as president of the New York Equal Suffrage League and the New York City Woman Suffrage Party, organizing parades and rallies for women's right to vote. Belmont founded the Political Equality Association and donated her fortune to the women's suffrage movement. So, in short, they're all part of the reason you were able to get that sticker in the first place.

More like this
Women Around The World Are Cutting Their Hair In Solidarity With Mahsa Amini
By Darshita Goyal
How To Politely Reject Someone Who Keeps Asking You Out
By Laken Howard and Lexi Inks
Romance Authors Are Mobilizing For Reproductive Rights
By Natalia Perez-Gonzalez
Black History Month UK’s 2022 Theme Calls For Action, Not Words
By Maxine Harrison
Get Even More From Bustle — Sign Up For The Newsletter