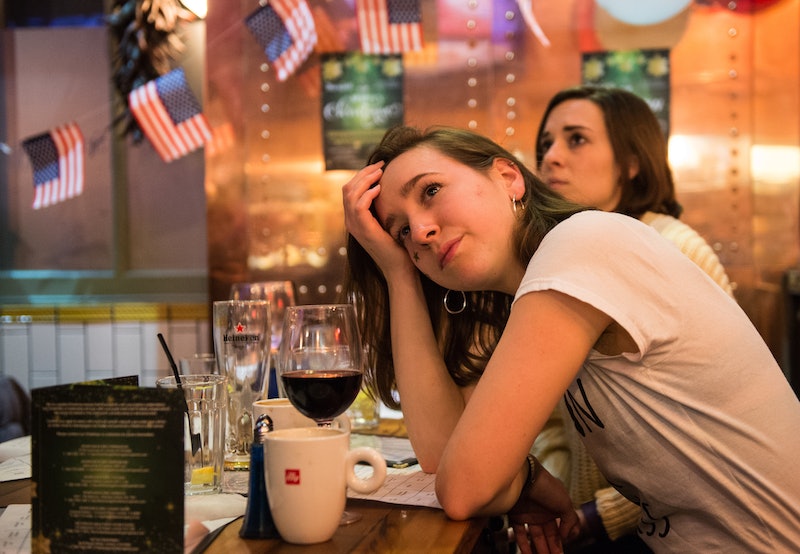 In fact, election anxiety had been perhaps the most-accurately predicted result of the campaign. For both Trump and Hillary Clinton supporters, there was a lot at stake during Tuesday's election. It is widely anticipated that the next president, whoever he or she may be, will nominate multiple Supreme Court justices, as well as direct the U.S. strategy against ISIS and spearhead the country's approach to immigration.

Heading into the election, several sources put Clinton's chances of victory remarkably higher than Trump's. For instance, The New York Times' Upshot blog put Clinton's chances at 93 percent at one point shortly before Election Day, only to reverse those projections when results started to roll in on Tuesday. With two of the most polarizing candidates in history on the ballot and election results shocking even the experts, election anxiety seemed to hit a pinnacle — and understandably so.

Early on in the night, election coverage provided some accidental comic relief when a man tripped and fell on camera at an election gathering. Don't laugh because you're judging him. Laugh because he's relatable.

In the spirit of comic relief, don't take the exit poll data or the election results too seriously until they're final. Instead, laugh at the relatable memes circulating around the internet. Remember: You're not alone in your stress — or in your confusion.

Sure, you can't help but wonder who will win the presidential election, but that's not the only race going on. Hundreds of senators and representatives are also up for election, and focusing on those races will keep you in the know (thereby feeding your FOMO) and keep you distracted from the stress of the presidential results. By the way, there's comic relief in the congressional races, too.

Use The Buddy System

The candidates couldn't campaign without their running mates, so why would you do Election Night without a partner? Experts believe that talking out your stress can really help. Find a buddy who can discuss the results with you throughout the night. If things get too stressful, your buddy can help to distract you from the results entirely.

Turn Off The News

Key Race Alert: It's OK to stop watching the live election results. The constant updates from the media can understandably stress any viewer out on Election Night, but it's really not necessary to watch every vote be counted. As long as you voted, you've done your civic duty. Now, just get a good night's sleep and wake up on Wednesday ready to take on the world with either candidate as the president-elect.

The media will stretch Tuesday's results as long as they need to — so it's time you took the same approach. Stretch your muscles and take deep breaths to help release the tension from your body. Not sure where to start? Consider these yoga poses for anxiety relief and fewer aches.

Put Down The Leftover Halloween Candy

As it turns out, Election Night probably isn't the right time to "treat yo' self." According to Everyday Health, sugary treats like candy and soda can have a negative impact on your anxiety. Instead, try snacking on an orange or a turkey sandwich.

No matter what side of the race you were on, it was natural to feel anxious as the election results came in on Tuesday night. Trump picked up key states like Florida and Texas, but Clinton held her own with states like California and Virginia. The tallies dragged on long into the night, giving the election anxiety plenty of time to set in.