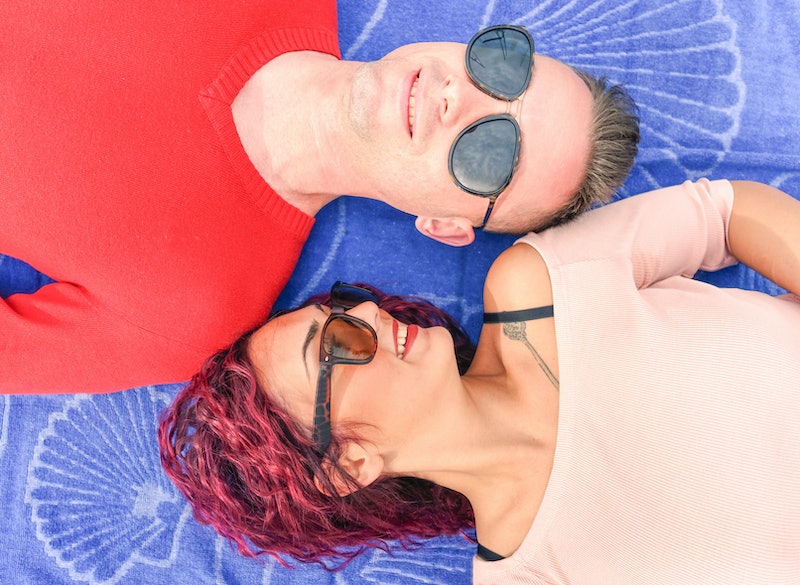 As pop culture icon Hannah Montana once sang: everybody makes mistakes. Although it's easy enough to recognize that nobody's perfect, that doesn't stop us from feeling disappointed in ourselves when we inevitably mess up. Whether it's missing a meeting at work, impulse shopping when you're on a tight budget, or making a mistake in a relationship, it's totally normal to feel a little down when things don't go how we planned. When it comes to your sexual health, it might be scary to think that mistakes can happen — but it's important to be informed and prepared. That's why a new campaign from Plan B One-Step®, #PerfectlyImperfect, featuring Carly Aquilino and Nessa of MTV's Girl Code, wants to spark conversations about the pressure to be “perfect" — and it's a good reminder that it's OK to make mistakes in your sex and dating life from time to time.

"It's OK to make mistakes in a relationship because that's how you learn and grow," Carly Aquilino tells Bustle. "The more obstacles you go through in a relationship, the stronger you become... Perfection is unattainable and frankly overrated. We all make mistakes, whether it be buying a horrible present for your boyfriend's birthday or even having an "oops moment" when you may have unprotected sex or your birth control fails you. This is why Nessa and I got involved with the 'Perfectly Imperfect' initiative, which aims to spark a conversation about the many myths surrounding emergency contraception and ensures women are prepared in case their birth control plan doesn't go as expected and they need emergency contraception."

Whether it's a birth control slip-up or a slight addiction with Facebook stalking your ex, we all make mistakes when it comes to our romantic lives. When you're in a relationship, there are some mistakes (like cheating) that are pretty much unforgivable. The good news? There are plenty of small, fixable mistakes it's OK to make in a relationship — here are five of the more common ones.

"White lies are OK to make," April Masini, relationship expert, tells Bustle. "In fact, tell your partner you like the sweater, the haircut or the meatloaf — just to keep the peace and pump up [their] self-esteem. Would it kill you to say his mother’s apple pie is amazing when it isn’t? Let the white lies go. They’re not just harmless, they keep the peace." Although honesty is super important in a relationship and it's better to have a partner with whom you can share your honest opinion, some little things just aren't worth the strife. So don't feel guilty if you're not entirely truthful all the time — when it comes to minor things, sometimes white lies are better than the painful truth.

Remember in Gilmore Girls when Rory was shocked to realize she had a crush on her hot new TA? She proceeded to announce it to Logan as if she'd cheated on him, then was surprised when he was like, "yeah, that's NBD." What Logan knew (and Rory didn't) is that flirting and developing small crushes is part of human nature — and that doesn't change when you're in a relationship with someone. Sure, it might be a better idea to flirt with your partner, but it's also nothing to be ashamed of if you sometimes bat your eyelashes at your favorite barista. It's not cheating to interact with other people, even if you happen to find them attractive or have a little crush on them. The only thing that's important is knowing where to draw the line: banter all you want, but don't slip the bartender your number at the end of the night.

Every relationship comes with some level of jealousy. While unhealthy amounts of jealousy can lead a partner to be possessive or controlling, there are also more mild instances of jealousy, which are perfectly normal. "[Mild jealousy] can indicate that the partners are still in love with each other enough to care and feel threatened by the idea of [their] partner being attracted to someone else or that someone else is attracted to [their] partner," Yvonne Thomas, licensed psychologist, tells Bustle. "This mild jealousy 'mistake' can actually breathe some life into a relationship that one or both partners may have felt was complacent or stagnant."

This is one area where no one wants to mess up. Still, that doesn't mean birth control mistakes don't happen — and probably more often than we'd like. "Many of us are so focused on being perfect the first time around, we don't explore the 'what ifs,' Girl Code's Nessa tells Bustle. "What if something happens and things don't go according to plan? What are my options? This is particularly important when it comes to contraception. Even if you think you are doing everything right, it is important to be informed about your options in the event you need a backup plan."

Although, in heterosexual relationships, the onus usually falls on women to be 'in charge' of birth control, in reality, avoiding accidental pregnancy is the responsibility of both partners. It's important is that you are able to communicate with your partner about any mishaps that may happen. Missing a few days' worth of pills, though not ideal, is something that can occasionally happen. It's not OK to fail to tell your partner this info so the two of you can come up with an alternate birth control plan together.

Although many of us would all like to think we have our sh*t together constantly, sometimes we're so busy that something important slips through the cracks, like failing to put your partner's birthday in your iCal. It might be horrifying to realize a mistake like that and have to make it up to your partner, but at the end of the day, admitting your error is more important than never making the mistake in the first place. "As I see it, a one time indiscretion doesn't do the real damage," Elinor Robin, PhD, LMFT, LMHC, tells Bustle. "The real problems happen when the slights occur as a series over time."

Try not to be forgetful, but don't be too hard on yourself if you occasionally slip up — after all, that's what flowers and chocolates were invented for. "It's OK to make almost any mistake, as long as it doesn't give your partner a sense of being devalued — feeling dismissed, discounted, disrespected, or disenfranchised," Robin says. "So, it's not the mistake that matters: it's the end result [or] consequence of the mistake. The bottom line, no matter what the mistake: you will be able to erase it if you can give your partner a sense of being valued and connected."

At the end of the day, we all mess up from time to time. What's important is being willing to admit when we're wrong or when we hurt our partner, and working to communicate better together.