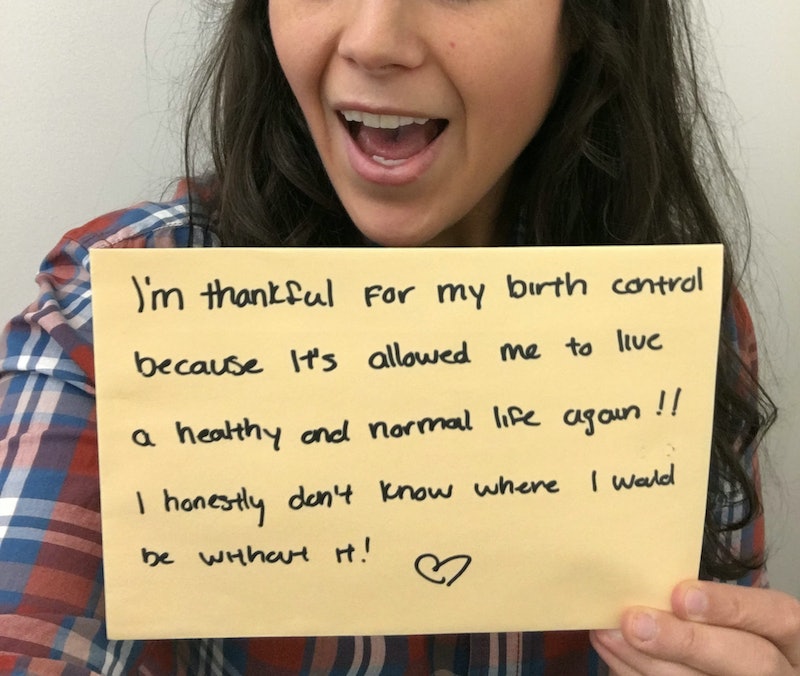 Yesterday I sent my friends a Reductress article "5 Men to F*ck Before You Lose Your Birth Control in January" so we could all enjoy a much-needed laugh and simultaneously commiserate, because oh god, what if this all really, actually happens?! Post-election, many women are afraid about what a Donald Trump presidency may mean for reproductive rights, from abortion access to the cost of birth control to the fate of Planned Parenthood. So much so that women are calling their doctors to get IUDs ASAP while they're still free and over 20,000 donations have been made to Planned Parenthood in Vice President-elect's Mike Pence's name.

"With possible repeal of Affordable Care Act, many women will not have insurance and/or will not have contraception coverage," Dr. Lauren F. Streicher, MD, Clinical Associate Professor of Obstetrics and Gynecology, Feinberg School of Medicine, Northwestern Memorial Hospital, tells Bustle. "By getting an IUD now, they will be protected for 3-10 years depending on which one they choose. Possible defunding of Planned Parenthood will make access even more limited. If Roe is overturned, not only will abortion become illegal, but many types of birth control as well (such as IUD’s) since far right extremists such as Mike Pence put their own personal beliefs above science."

Luckily, The National Campaign to Prevent Teen and Unplanned Pregnancy's Thanks, Birth Control campaign comes at the perfect time. Launched on November 16, the initiative is here to not only celebrate birth control but remind us just how important our reproductive rights are — and why they're worth fighting for. People are encouraged to share how birth control has impacted their lives and post it to Twitter, Facebook, and other social media channels using hashtag #ThxBirthControl.

The truth is, 99 percent of American women have used birth control at one point or another during their sex lives. The unplanned pregnancy rate is decreasing for the first time in over 10 years, as it’s dropped 18 percent from 2008 to 2011. But preventing unplanned pregnancy is certainly not the only perk to using birth control or the only reason so many women are fans of it.

As you'll see below, the reasons most people are grateful for birth control totally vary. For some, it's about not wanting kids right now (or ever) and for others, it's about alleviating pain or clearing up acne. One thing's for sure though, birth control is giving women control over their bodies — and their lives.

"I am thankful for my access to birth control because my fiancee and I do not anticipate having children. While we take our time coming to the finality of that decision and potentially having medical procedures, birth control allows us to safely and confidently have sex and build our relationship, without planning for children. :)"

"The thought that immediately pops into my head is of course 'it gives me independence' but more than that birth control is something that gives me control over a fear in my life. There are so many things in life I'm afraid that i have absolutely no control over and those conglomerate into this little brew that's just waiting to boil over. But knowing i can control my reproductive system is a great sigh of relief. And let's be honest, we've all make some questionable decisions out of a place of fear instead of because of what's best for us."

"It's possible I'll want kids eventually but I 1,000 percent don't want them now. Birth control gives me one less thing to stress about."

"Birth control cleared my acne and helps me manage my cramps."

"I have my health and personal reasons – went from hemorrhaging every month to living a healthy, normal life. The severe blood loss was becoming dangerous and I couldn’t afford the pill anymore. Then I learned that IUDs are 100 percent covered by insurance (thanks, Obama!!!!) and it honestly changed my life for the better. Also just not ready to become a mother just yet."

"ThxBirthControl for letting me choose control of whether/when I have a child!!"

"Thankful: I can travel to Zika-infected countries without fear of infecting a baby. And because right now, my husband and I don't feel like anyone is missing from our family. Maybe one day, but not now."

"It takes away physical pain so intense I once thought I was dying."

"It makes me feel confident in that I CAN CHOOSE my own destiny in this crazy, uncertain world!"

"I am thankful for birth control because without it, my son would not be here. I know that sounds counter-intuitive, so allow me to explain. I have had OB/GYN problems almost all my life. After three miscarriages, I was desperate for a child. My specialist told me that taking birth control pills for three months after my last miscarriage would 1) give my body time to heal before conceiving, thus lessening the chance of another miscarriage, 2) help my tendency towards poly-cystic ovarian disease in that no eggs would be prepared for release for these months 3) when I stopped the pills, my body would jump start and produce one healthy egg rather than preparing on several eggs to release over a period of many months.

It worked, and even though I had to take progesterone to maintain the pregnancy, my son is perfectly healthy and graduated this year with a PhD in physics. He is a marvelous person and the world will be a better place for having had him in it. Naturally, my opinion is not in the least bit biased! Even so, with his accomplishments, I really do look forward to the contributions he will make to this world in his work with quantum spectroscopy."

"It gives me control over my body."

More like this
Are Gemini & Scorpio Compatible In A Relationship?
By Kristine Fellizar
15 Flirty "Thinking Of You" Texts That’ll Make Your Crush’s Day
By Lexi Inks
The “Rules For Dating” TikTok Trend, Explained
By Lexi Inks
6 Abortion Advocates To Follow On TikTok
By Sara Youngblood Gregory
Get Even More From Bustle — Sign Up For The Newsletter