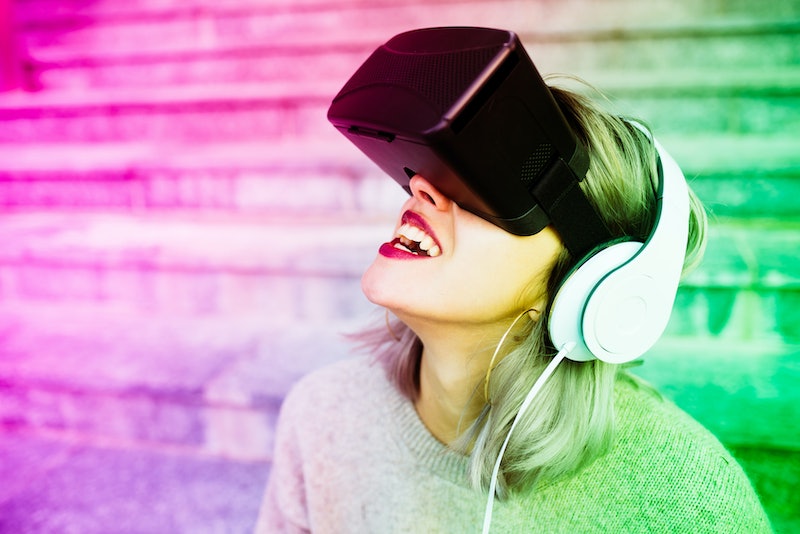 As technology advances, every part of our lives is changing — even our sex lives. To make us aware of these changes, FutureofSex.net's editor Jenna Owsianik and publisher Ross Dawson created a report on the future of sex. And from the looks of it, there's a lot to get excited about... and a little frightened about.

"How we connect with our loved ones, the intimacy of our relationships with technology, and even our identities are swiftly moving into uncharted territory," Dawson said in a press release.

Some of their predictions are pretty out there. Within the next 30 years, for example, 10 percent of us will have had sex with an android. By 2020, our dates will take place in virtual reality. And within the next decade, we'll be able to make each other orgasm using only our brains! Here are the five main changes we're about to see, according to the report.

Soon, cyber-sex will feel a whole lot more like the real thing. Given how many sex toys connect to apps that can be controlled from a distance, we're already headed in this direction. There's even a set of toys that respond to each other's movements. FutureofSex predicts that we'll be able to have sex with 3D-printed body parts based on our partners by 2025.

There are already programs like Second Life and Red Light Center that let people create avatars and have sex with other avatars. There are also virtual communities specifically for people to explore kinks and sexual subcultures. Soon, we'll have hyper-realistic avatars, haptic sex toys, and even touch-sensitive suits that allow you to experience your character's sensations in virtual reality.

Yup, sex-bots are a real thing. There are already robot escort services in Japan and South Korea, and some scholars are worried about how sex robots could harm human relationships. Whether it's for better or for worse, though, it does seem like this industry is progressing. FutureSex predicts that robots and chatbots will get more human-like, to the point that we can actually download human consciousness onto them, and people will be able to design their own sex-bots based on their partners or celebrities (actually, there's already a company called Real Doll that does that).

It all sounds potentially dangerous, but also very intriguing.