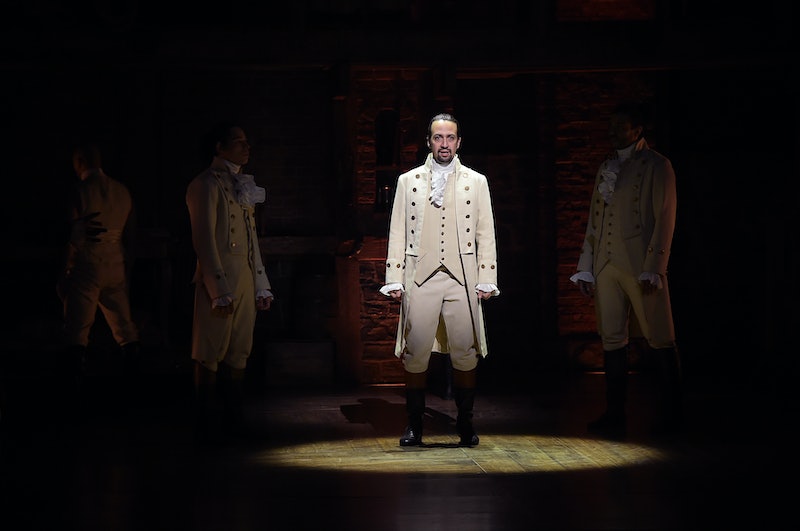 By now, you have probably heard there was a special guest at Hamilton's Friday, Nov. 18 performance. Vice president-elect Mike Pence attended the show, and the cast drafted a special message for him that was read at the end of the performance. Aaron Burr actor, Brandon Victor Dixon, read the speech which was written by Lin-Manuel Miranda and director Tommy Kail with input from the cast. But this speech was not the only moment the Hamilton cast appeared to be speaking directly to Pence.

The Hollywood Reporter revealed some lines, like "Immigrants, we get the job done," were met with cheering, while others seemed to be sung at Pence. The performance was more politically charged than ever before, and given the current political climate, it is not surprising the cast of such a powerful, American play would take the opportunity to speak to a man who has a background of making political choices that could potentially harm Americans. There was more than one lyric that could have been a jab at Pence, intentional or not.

With Pence in the audience, Hamilton lyrics took on a whole new meaning. Hamilton's fight is weirdly prescient again as these lyrics, which could have been written about Pence, so aptly illustrate.

Jefferson's snide remark about Hamilton and Washington's relationship had to hit close to home when Pence was sitting in the audience. Especially when it sums up his current relationship with Trump so nicely.

The world is watching every move Pence and Trump are making, and it won't forget the things they have done. It couldn't feel great for Pence to hear a musical reminder that if he screws up that is all he will be remembered for.

Since Pence went from condemning Trump's Access Hollywood tape to reasserting his devotion to the man, this pointed question to Burr resonated across centuries.

5. "You Stand Only For Yourself, It's What You Do"

Given the constant flip-flopping on issues, this statement has Pence written all over it.

6. "When Your People Say They Hate You, Don't Come Crawling Back To Me"

The cheese stands alone, Pence, especially when that cheese advocates for conversion therapy.

7. "This Congress Does Not Speak For Me"

Sorry Pence, but at least half of America is echoing this sentiment at the moment.

Pence made sure there would be no presidency in his future the minute he hopped aboard the Trump train.

9. "Headfirst Into A Political Abyss!"

Is it any wonder Pence walked out during "What'd I Miss?" with lyrics as on point as that one?

Hamilton did not have to change one line to offer Pence some serious political commentary, which is exactly why the musical is more important now than ever before.