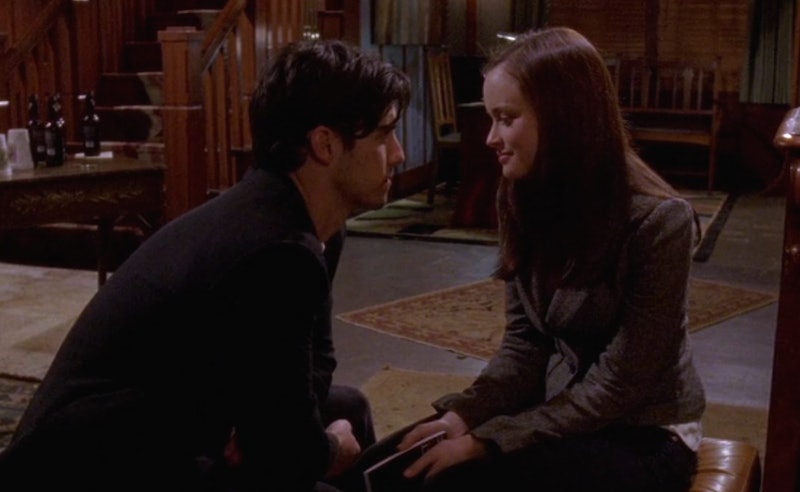 Most self-respecting Gilmore Girls fans believe that Rory and Jess should be endgame (no offense, Team Dean or Team Logan!). Because of that, you need to remember exactly where Rory and Jess left off on Gilmore Girls before the revival premieres on Netflix on Nov. 25. Even if you do believe that Rory and Logan may end up together or some other romantic theory that I emotionally can't handle right now, the trailer proved that there's no denying that Jess will be an important part of Gilmore Girls: A Year in the Life. So where did he leave off with Rory during the original Gilmore Girls series?

The very last episode that Jess appeared in was Season 6's "The Real Paul Anka." That's right, friends. Jess didn't show any of his bad boy face in Season 7, which considering the travesty that Season 7 was at times because creator Amy Sherman-Palladino wasn't involved, might have been for the best.

Anyway, in Season 6, Episode 18, Jess was hosting an open house at his publishing company in Philadelphia and along with Luke and April attending, Rory also showed up unannounced. She lingered until everyone else had left the event and when they were alone, Jess kissed her. However, Rory was just using Jess to try to get back at Logan, whom she was still mad at for getting with girls when they were on a break. She confessed to Jess that she loved Logan and that was the last we ever saw of our beloved Jess Mariano.

OK, so that doesn't inspire much confidence for Team Jess for Gilmore Girls: A Year in the Life. But if we journey back to the second-to-last episode Jess was in, you may feel better about their potential.

After getting some intel from Luke, Jess showed up at Emily and Richard's house unannounced (it's a trend with these two) to visit Rory in Season 6, Episode 8, "Let Me Hear Your Balalaikas Ringing Out." Jess hadn't been on the series since Season 4 and Rory (and fans!) were genuinely pleased to see him. Rory had just dealt with a very drunken Logan, so a more mature Jess showing up was like a breath of fresh air for her. To top it all off, Jess revealed he published a short novel — something Rory always knew he was capable of.

They planned to meet up the next night and Logan happened to show up right as Jess and Rory were leaving for dinner. Logan joined the reunion and Rory's men had an inevitable face-off. (Oy, with the Rory's men face-offs already.) While Logan was insufferable, Jess showed more self-restraint than he ever had in previous episodes. Of course, he finally snapped after Logan continuously antagonized him and when he left the bar, Rory followed him.

Seeing Rory dating a jerk (because Logan truly was a total jerk in that moment) led to Jess being brutally honest with Rory by telling her that she wasn't being true to herself. He called her out for living at her grandparents' house, working for the DAR, and dropping out of Yale. It was a rude awakening from an "old friend" (as she introduced him to Logan) that Rory was totally in need of. Rory's storyline at this point was super frustrating and it was truly telling that even though Lorelai couldn't get through to Rory about the big mistake she was making with leaving Yale, Jess somehow was able to.

Rory hadn't seen Jess since Season 4's "Last Week Fights, This Week Tights" when he asked her to run away with him. And Jess' speech outside of the bar echoed what he had said to her in her dorm room years ago. He passionately claimed how he "knew" Rory. Cause, uh duh, out of Rory's boyfriends, Jess knew her the best — even if she didn't always like to admit it.

As I have previously written about, Rory ended up getting a job, going back to Yale, and reuniting with Lorelai the very next episode after seeing Jess. So, I'm sorry Rory-Logan 'shippers, but doesn't that prove Jess is better for Rory?

While Jess may not have been much of a presence in the latter half of the original Gilmore Girls, Team Jess is expecting big things from him and Rory in A Year in the Life. And Sherman-Palladino better not let us down in the revival like Jess let Rory down in Season 3. Jess already proved he was deserving of Rory in Season 6 by growing up a tremendous amount and so he must be even more perfect for her all these years later.