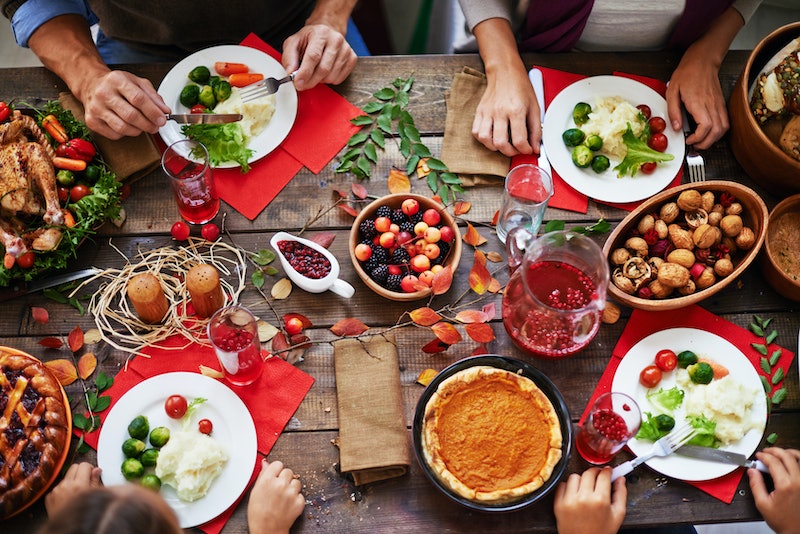 Although the saying goes that people should never discuss religion and politics, considering the state of the nation right now, it’s a pretty hard topic to avoid both online and IRL. And now, even families are divided over the election, as Hillary Clinton supporters and Donald Trump supporters continue to lock horns, hoping to change the minds and hearts of each other.

“Family holiday meals have a way of spiraling when multiple people are involved,” Licensed Psychologist Dr. Jennifer Rhodes tells Bustle. And while that isn't always the case, it might end up being more the case this year than last year, if we all don't take time to emotionally prepare ourselves for the possibility of walking into the lion's den. You can't just fling yourself into the situation, without some thorough prepping and strategizing, and hope for the best.

So how do you go about handling the holidays, especially in a relative's house where political opinions are drastically divided? What it comes down to is keeping an open mind — as best you can — and not totally losing your cool. Here are seven tips to help you cope, from keeping alcohol consumption to a minimum to taking breaks.

1. Try To Steer Clear Of Political Conversations If It's Everyone Against You

While it’s going to be tricky, your best bet, in the very first place, is to avoid all political talk, especially if you’re the only one at the table with a difference of opinion, explains Dr. Rhodes. As much as you’d love to give your uncle a piece of your mind, just don’t. “It is too easy for you to be scapegoated,” says Dr. Rhodes. “[Then] a fun, relaxing time could end up being a nightmare if you are not careful about your personal boundaries.” And it’s a nightmare you can’t escape — at least not for a few hours.

A code word, similar to a safe word during sex, puts an end to things real quick, so it’s definitely something worth considering. “I think the best tip is to be up front with family members and decide on a code word ahead of time,” says Dr. Rhodes. “Choosing a code word that immediately makes everyone laugh will assure that no one leaves the dinner table prematurely.” It also means that you’ve addressed the elephant in the room and you’re keeping things in check.

3. Keep The Drinking To A Minimum

“Some wine and it can truly be a recipe for disaster!” Dr. Rhodes explains. And she’s right. It’s one thing to have a couple glasses of wine to enjoy yourself, but if you start relying on the wine to numb your anger or disappointment in the division of your family, things are going to get messy and messy real fast. It’s hard to curb one’s tongue once the vino starts flowing.

4. Remember Everyone Is Allowed To Their Opinion

While you can think someone’s opinion is wrong, you still need to realize that they’re very much entitled to it. Dr. Rhodes point out that it’s important to be respectful of these opinions, as much as they might pain you, and do your best to partake in adult behavior, as opposed to a screaming match.

Speaking of adult behavior, as Michelle Obama said during the campaign, “When they go low, we go high,” you should try to do the same — especially for the younger kids at the holiday dinner. “I would use it as an opportunity to model for the younger generation how to have an adult conversation,” says Dr. Rhodes. “There is no need to yell or be judgmental.” Besides, if you start screaming at your sister in front of your nephews, that’s not going to go over very well. You’ll be the bad person in that scenario, because, depending on their age, they might be too young to really understand what’s going on and that’s not fair to them.

6. If You’re Bringing A Partner Home, Prep Them Beforehand

Like, really prep them, especially if this is the first time meeting your family. If you and your partner are the only two with a difference of opinion at the table, then make sure you have a plan of how to tackle it. Dr. Rhodes suggests choosing a private code word for the two of you that signals that you both need to take it down a notch and stop getting so riled. Yes, like everyone else at that table, you’re beyond entitled to your opinion, but at the end of the day, beating a dead horse is beating a dead horse; you’re not going to get very far.

7. Don’t Be Afraid To Take A Break From The Conversation

The best way to cope if you do get into it? Take a breather. If it means getting up from the table to go outside or taking a walk around the block until the blood that rushed to your face has gone back to its proper place in your body, do it. “If you feel that things are about to spiral, it is better to get up and take a break for a few minutes then sit quietly,” says Dr. Rhodes. This is most especially the case if you’ve brought home your partner for the holiday. You want to make sure that they’re aware that you’re recognizing their needs, too, and you don’t want to make it anymore uncomfortable than it has to be.

So will you be able to handle the holidays with grace and not throwing mashed potatoes at someone? Totally. It's just going to require that you summon some of that inner adult that you sometimes try and avoid.