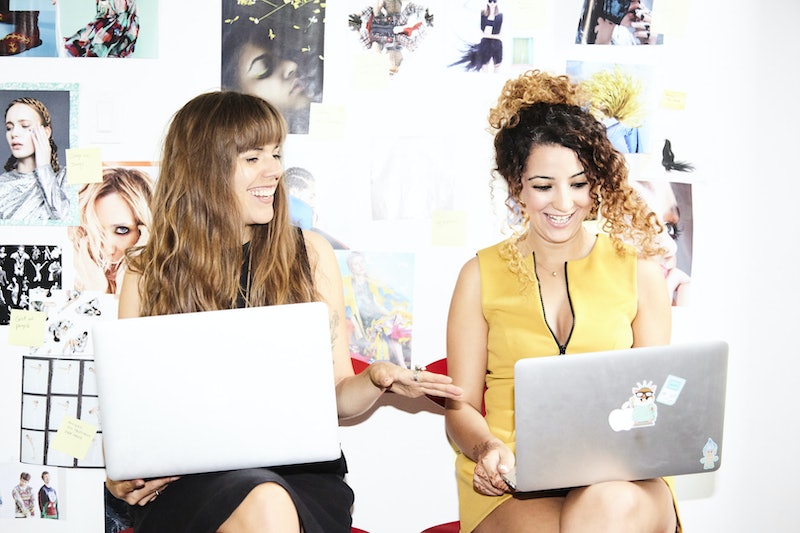 It's well established that men have an easier time gaining acknowledgement, making money, and being accepted at work. But this isn't just because men are sexist toward women; women and gender minorities can also be sexist toward themselves, often because that's how our culture has taught us to be. The best ways to combat this internalized misogyny in the workplace aren't as clear as the ways to combat external sexism, since it can be harder to recognize — but because our own behavior is within our power, addressing internalized misogyny is one of the most effective ways to ultimately make our workplaces more equal.

Internalized misogyny is essentially a set of sexist views that we pick up from society and direct toward ourselves, and our jobs are one area where this happens. Women have particularly been feeling bad about their careers since the election, with some citing Hillary Clinton's loss as proof that no matter how qualified a woman is, she will still lose to a man. Biases against powerful women are real, and they don't just exist in politics. They exist in pretty much every industry.

Here are a few ways we can combat poor treatment of women in the workplace, starting with our own thoughts and thoughts, beliefs, and behaviors.

Ask For That Raise

Women are often discouraged from asking for money because they assume they wouldn't get it — or that it's greedy (and therefore "unfeminine") to ask. A recent ZipRecruiter study, for example, found that women ask for over $11,000 less than men on their job applications. So, push back against that voice in your head that says you don't deserve a raise. You still might not get it even if you ask for it, but just making the attempt increases your chances of getting paid as much as men in your position.

Apply For That Job You Don't Feel Qualified For

Similarly, since women tend to have lower confidence than men, according to a study in the Journal of Personality and Social Psychology, you may actually underestimate how qualified you are for a job. The only way you can find out is to apply, and the outcome might surprise you, making it well worth the time you put into the application.

Tell That Dude You Disagree With Him

If you feel like you're being mansplained to or interrupted at work, it's probably not in your head. Men take up 75 percent of meetings, according to a Brigham Young University and Princeton study. And if that guy that's speaking over you has got something wrong, you are well within your rights to offer your own perspective. Unfortunately, some people penalize women for speaking their minds at work, but as long is you're respectful, they'd be wrong to hold it against you.

To combat this tendency for men to dominate meetings, ask women for their expertise or help with a project people might normally bring to a man. This not only validates her work but also sends the message to your coworkers that she's competent.

Help Other Women At Work

Women are socialized to be competitive with one another, whether in social situations or in the workplace, but they can also be one another's most powerful allies. If you take the opportunity to help a more junior staff member with something you have more experience in, organize a meeting for your company's female employees, or even answer a question posted in an online forum related to your industry, you can help your whole office or virtual workplace become a more feminist place.